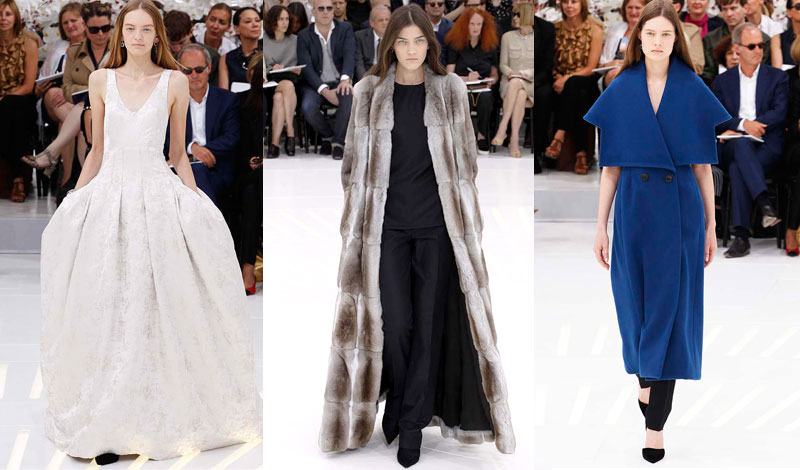 Raf Simons’ Couture latest spanned centuries. While designers are always referencing other eras, Simons packed in several time periods of inspiration into one show, from 18th century court costumes and Edwardian coats to ’20s flappers and NASA astronaut jumpsuits. It was, of course, another stellar showing from Simons, who is constantly proving he can come up with new ideas that are ultimately wearable, even if they’re ultimately based on the past.

To wit: The 18th century pannier silhouettes on romantic dresses were slightly tamer versions of the originals’ wide exaggerated hips, done in white, silver, and blue jacquard. Here, mercifully, they came sans corset. Floor sweeping Edwardian coats came in sleek white, grey, and black versions plus, luxurious furs. Cheers to those who have deep pockets and statuesque figures (or skyscraper-tall heels), who can both purchase and wear these toppers. You could imagine them drifting down a snowy street in Paris on a lithe figure come Winter. And, of course, there was the cerulean blue sleeveless below-the-knee coat with the exaggerated collar, which must be mentioned as a standout piece. Flapper dresses came adorned with high-tech resin for fringe instead of beads or were done in floral prints, which felt like an update compared to the historical versions. There were also the astronaut jumpsuits that were zippered, pocketed, and cinched at the waists with wide black belts and, in some cases, paired with slouchy gloves. These were also transformed into dresses that zipped down the front, done in the same spacey material, which managed to look chic, not street. It was yet another collection chez Dior thanks to Simons that took flight!

The Next Generation: Sophia Schrager