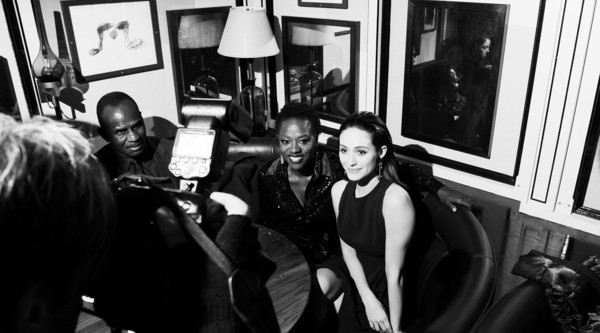 (NEW YORK) Beautiful creatures, both of the show-fatigued fashion set and far beyond, took a break from the catwalking to hit up the Cinema Society and Dior Beauty screening and bash for Beautiful Creatures. The flick’s stars, including Emmy Rossum and Viola Davis, were on hand, though the film’s apparent MVP in the fun department was not: Rossum bestowed that compliment on costar Emma Thompson. “She never complained about the heat and we were just dripping sweat under these massive, old dresses.” However, folks like Rachel Roy, Victoria Justice, Kelly Rutherford, Cory Bond, and Russell Simmons did turn out to celebrate.

Once the cinematic stint in fantasyland concluded, party people headed to newish resto Cole’s Greenwich Village. On the menu: grilled shrimp, sliders, lobster rolls, chicken kebabs, and tater tots stuffed with bacon, plus signature Vikingford vodka cocktails that reflected the “light” and “dark” sides of the magical world in which the supernatural teen romance flick is set. Girls star Alex Karpovsky popped by, as did Billy Magnussen, the latter of whom has been starring, as of late, in the Christopher Durang play Vanya and Sonya and Masha and Spike, which is apparently hitting Broadway after its successful run at Lincoln Center Theater. Theater tidbits to know right now!

Of course, Valentine’s Day entered the conversational sphere, and for Davis, the surprise factor is still intact: “That’s up to my husband. I think he’s got something great planned, though. I can see it in his eyes.” Enjoy, cheri!

Past Curfew! With Cindi Leive