Meet the Costume Designers Behind The Hunger Games: Mockingjay 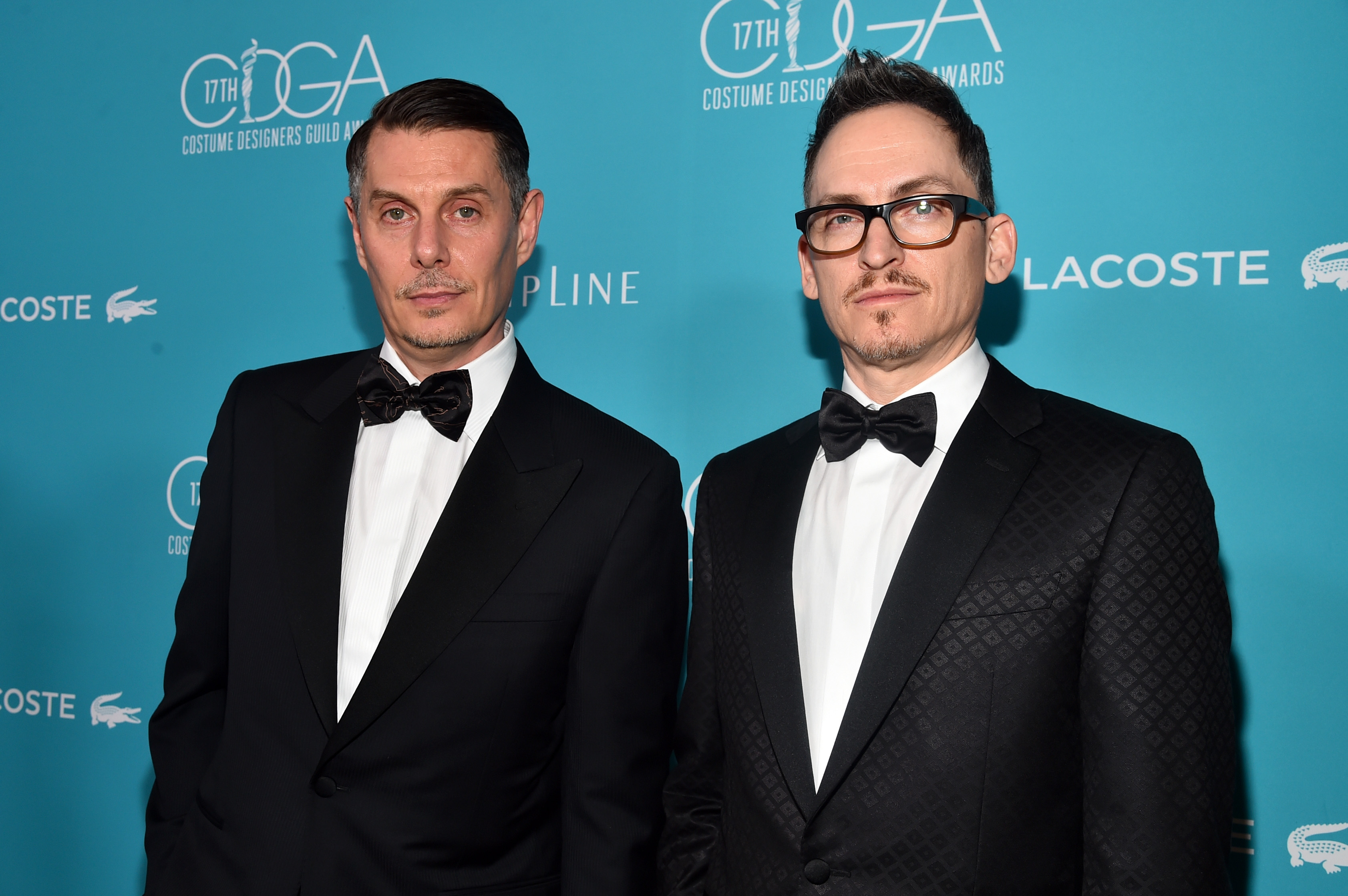 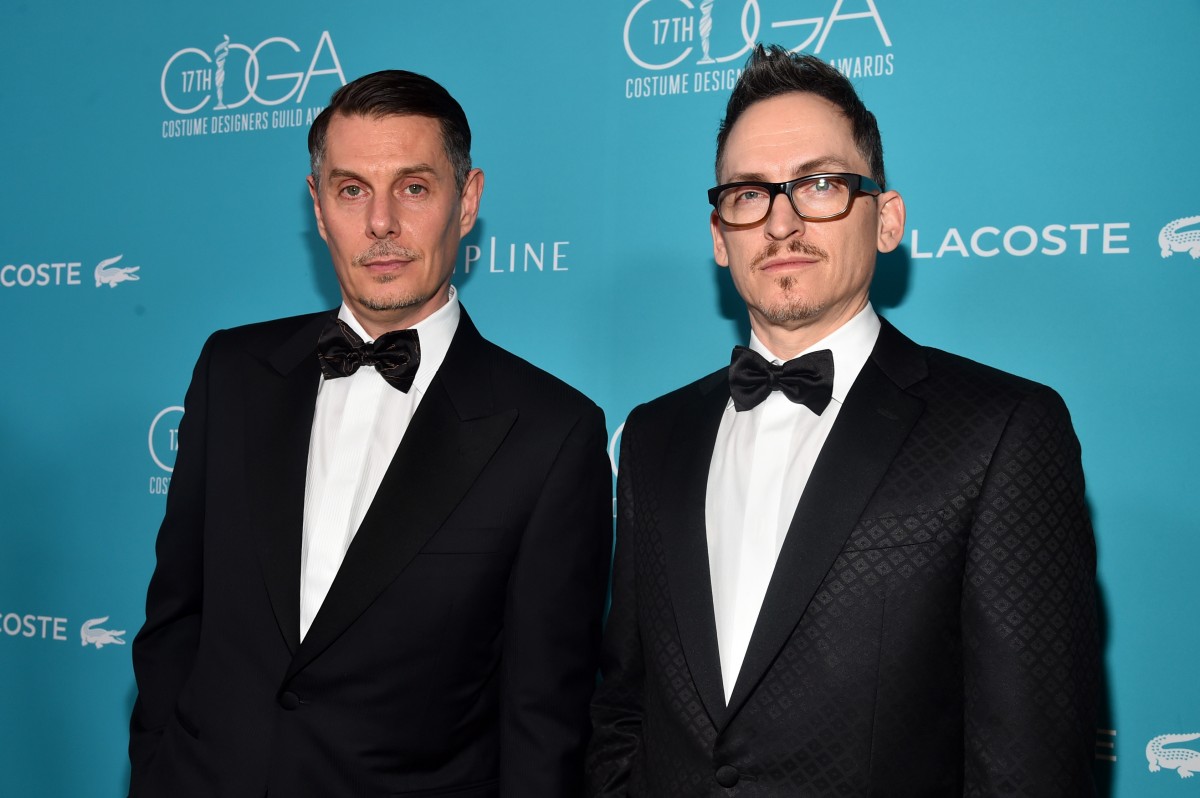 The Hunger Games fans are well-acquainted with the names Katniss Everdeen, Cinna (her stylist), and Effie Trinket (the film’s reigning fashionista), but may be less familiar with two others: Kurt and Bart. Meet the costume designers who masterminded the wardrobes for The Hunger Games: Mockingjay Part 1 and Part 2. The design duo—who go by first names and have been working together for 32 years—went from helming their own label circa 1983 (which was carried by Pat Field) to working on the set of Pee Wee’s Playhouse to styling major films and music videos, and worked with the late, great David Bowie. Intrigued?

You’re no fashion newbies. Where did it all begin?
Kurt: We met each other in 1983 at the University of Colorado in Boulder. It was an amazing time for music and fashion and we bonded through these interests. We were obsessed with fashion magazines from the UK and New York like The Face, ID, and Details. Looking back, they became bibles for us. Ultimately, this led to our own small label in Denver called Design Asylum, which we took to New York when we moved there in ’86. We sold at places like Patricia Field and 109 St Marks and eventually became a bit disenchanted with the idea of actually having to fill orders—not only from a monetary standpoint, but we mainly enjoyed making clothes for ourselves and friends to go out in.
Bart: Eventually this led to working at the animation/production company that created Pee Wee’s Playhouse, and we started doing costumes and styling for commercials and music videos. We were stylists for a long time and our foray into film seemed natural.

Where did you find ideas for The Hunger Games costumes?
Kurt: We researched a lot of different eras and movements, and lots of “isms” like constructivism, futurism, Maoism. We also looked at times of austerity during wartime and were fascinated by the idea of function leading design, that there would likely be a scarcity of materials, and that excessive design lines, pleats, buttons, etc. would be closely monitored.
Bart: With every film we design it starts with an immersion into the story and research. The amount of information on the Internet has replaced some of the time spent in libraries and bookstores, but nothing beats the inspiration of things that you can view in person. Living in New York, there is so much access to art and museums, but the subway ride to the museum can be inspirational itself. The Metropolitan Museum has an armor collection that was a huge inspiration in designing Katniss’ Mockingjay costume.

How did you design the other costumes?
Bart: When it came to the District 13 uniform I was psyched. The most exciting thing about entering this franchise was the fact that the Mockingjay films took these established and beloved characters and threw them into a new environment, especially in their dress.
Kurt: We really wanted the functionality of the clothing to lead the way. There is a real utility to the clothing and it has that classic American workwear feeling. We tried to translate that into a small number of styles. Francis Lawrence, the director, described it as if each person has a footlocker. Once you start thinking of it like that, it gets really interesting. What does one person really need to get by? A pair of pants, a shirt, a dress, sleepwear, socks, and shoes.
Bart: It was also really exciting to design the combat uniforms for the District 13 soldiers. We were very lucky to collaborate with UK designer Aitor Throup. We were fans of his for a long time and kept coming across his designs during our research. He has such a grip on the function of clothing and movement and also creates such a beautiful lean silhouette. Our collaboration resulted in what I think is a really streamlined, authentic, futuristic, tactical uniform.

In Part 2, the Capitol’s extravagant costumes are toned down a lot, even Elizabeth Banks’ over-the-top-character, Effie.
Kurt: It was inspiring to take the Capitol people and imagine how they would react to suddenly having their safe world turned upside down. We loved imaging what these people would grab if they had to flee. There is a beautiful Steven Meisel editorial that has these models in all these layered coats and wraps and it was what we imagined these people would do. They would layer their furs and jewelry and try to take all these material things with them. Pretentious to the end!
Kurt: Effie was a dream to design for. We were so happy that we not only got a few high fashion looks for her, but the most fun ones were the drab District 13 looks. Our fittings with Elizabeth were a blast—we looked at the five pieces of issued clothing on the rack and started to figure out how Effie would create a high fashion look. It was like a Project Runway challenge! Our best reference was Little Edie from Grey Gardens. Fashion and style is such an innate thing for Effie so she can turn it out no matter how dire her circumstances.

How did you design the costumes so the cast could easily move around in them?
Bart: Action stories mean working closely with the actors and stunt department to make sure that the clothes can perform with the action of the film. That can take some R&D. A lot of times the look of the garment isn’t normally suited for action, so you build clothes in stretch fabrics or engineer them to move with the body or hide pads or protective equipment. It’s equal amounts making right fabric choices as it is about the cut and construction.

What’s a little known fact about designing for film?
Bart: The work involved varies and is specific to each project or story, with the one constant being the work load. Making any film requires an enormous amount of collaborative energy and handwork. The thing that shocks people the most about the work is the amount of hours and the intensity of the schedule. It is really demanding, so unless you’re a masochist you better love it.

You’re well-known to reference the ’80s and ’90s NYC nightclub scene in your designs—did that influence these costumes in any way?
Kurt: Our nightclub years will always inform our aesthetic to a certain degree. Maybe it can be distilled down to the idea that one should take risks and not be afraid to express ideas no matter how crazy. We’ve had the opportunity to know some truly fascinating and creative people in our lifetime. Many of those people are creative designers, jewelry makers, photographers, hair and make up people, and personalities. We draw inspiration from all of them, and we are blessed to call them our friends and collaborators. We had many of the pieces for the Capitol people done by friends.

You’ve worked with the late great David Bowie…Tell us about that experience.
Bart: David Bowie represented an unapologetic, original, self-created persona. He was a beacon for the outsider and misfit and a way to view yourself in a new way. He was a living icon and the anticipation of meeting Ziggy Stardust built up that anticipation. David arrived to the shoot solo, no entourage, no management, no pretense, and was immediately engaged in the moment and the shoot. His enormous and prolific image wasn’t something you had to muddle through. It was funny, we just started talking about all kinds of things, vampire movies and architecture. He was so at ease with himself and such an elegant man. I think his legacy will continue to resonate and the generations that he inspired will continue to inspire new ones. What an honor to meet him. He was a true gentleman.

What are some other projects and films you’ve worked on together?
Bart: In the past 32 years or so, we’ve covered a lot of territory. Prior to working in film we were stylists and worked with some great image makers and musicians. We love creating a strong visual whether it’s for a fashion editorial, music video, or costumes for stage. We designed three world tours for Britney Spears in her heyday, styled and designed costumes for puppets, monsters, musicians, actors, models, and freaks. To be part of telling a small story with a huge heart like Dallas Buyers Club and have it reach millions or being able to realize the costume for Katniss in The Hunger Games for a global audience is extraordinary and rewarding. Designing costume still feels new for us because every film and filmmaker is so different. We have a great job!

The Hunger Games: Mockingjay Part 2 is now available on digital HD and on Blu-ray combo pack