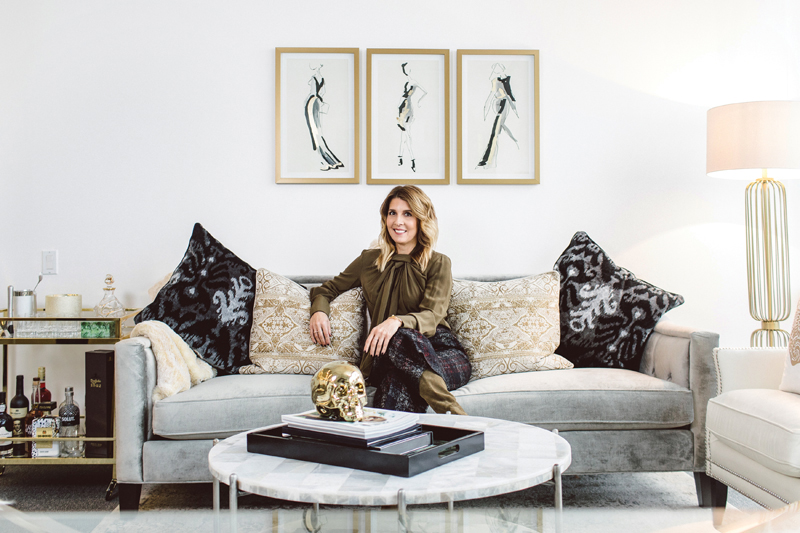 When the role of editor in chief of Cosmo opened up last year, the gig went to its onetime executive editor Michele Promaulayko, who had spent nearly a decade at the title. She welcomed us into her cushy office at Hearst to dish on all her plans—and the proper way to pronounce her last name. Take notes!

After spending so many years with the brand, how does it feel to be elevated to EIC?
I never completely allowed myself to think I’d be sitting in this chair. It’s only been occupied by four other people. When I think about it in those terms it blows my mind, so it’s a dream come true. I feel super grateful. It’s great, it’s incredible, it’s fun, it’s challenging, I could go on and on with the adjectives. I’m still pinching myself.

How has the magazine changed since you were last there?
It’s evolved, as all long-standing brands need to do. The world’s evolved. The audience has become more fragmented and that means that Cosmo needs to be expanded onto a lot of different platforms, so that’s one thing that’s changed. It’s more inclusive. Young women are more sexually fluid today and Cosmo acknowledges that. We also champion body-type diversity and acceptance.

What does Cosmo look like under your direction?
It’s still taking shape. The April issue will be the first one that I’ll have planned in its entirety. Cosmo has been influential in every incarnation under every editor, and each has brought her own strengths and perspectives to it. My ambition is to make it the best Cosmo for right now and to make sure that we continue to drive the important conversations that impact young women today, such as reproductive freedom and equal pay. Cosmo is the obvious authority when it comes to relationships, but it’s also a beauty and fashion powerhouse. Another one of my ambitious is to elevate guys who are deserving of elevation. It’s easy to point out bad behavior—and it exists—but we’re not about pitting the sexes against each other. I also want to revive some of the tasteful humor, cleverness, and irreverence Cosmo is known for, while maintaining its sophistication. We could all stand to laugh more these days.

Are you bringing the sexy back?
Cosmo is known as the relationship bible, so that’s an inherent part of its DNA. The sex Q&A has existed the whole way through, but one of Cosmo’s great strengths is its ability to have those kinds of frank conversations with readers. So, absolutely. I always say that Cosmopolitan is unapologetically sexy.

How did you first start at the magazine?
When I first came, I was a deputy editor and within a year I was promoted to executive editor. I had just turned 30. So in hindsight I feel like I was pretty young.

So young.
And green for that job. But Kate White, who was the editor at the time, didn’t think about age. She didn’t think about sort of appropriateness at that level. She just looked at the work, and we had a great working relationship, so she elevated me. She gave me that incredible opportunity and it changed my life. I call being the executive editor of Cosmo editor-in-chief boot camp.

Kate is a legend. What did you learn from her?
How much time do you have? Kate taught me to go with your “informed gut”—meaning, do research, but also tune in to your intuition. Also, to edit to one reader, if you can; to try to find the intersection of the universal and the specific. Another thing she impressed upon me was how important it is to build in time to think about the big picture for the magazine because it’s so easy to get caught up in the day-to-day.

What is she up to these days?
She’s on the speaking circuit, still writing novels, and built a house in Uruguay.

You began the job with reality cameras on you for the E! So Cosmo show.
It is not an exaggeration to say that I was miked my first hour on the job.

What was that like?
It was intense and not entirely natural, but I wasn’t miked the whole time because the show is really centered on the young fashion-and-beauty editors here for the most part. I think I’ll have a peripheral role, and they absolutely wanted to show the transition of power and the kind of handing off of the baton as the editor in chief. And Joanna [Coles] is an executive producer of the show; she’s a big part of it. It took up a lot of time, because they have to film a lot to get a little. I did have the balance of participating in the show and getting to know the people outside of that. But they were here every day for weeks. People were conscious of their presence.

Any trepidation about appearing on television?
It’s different than doing the Today show, right? I’ve done Today and Good Morning America and Doctor Oz and all these shows that you go on as a magazine editor talking about an article that you’ve done. I’m comfortable doing that; this is different than that. So, there was trepidation in that it’s new. But more than that, I don’t know how they’re going to edit it. So the thing you always fear with a quote unquote reality show, and, by the way, they call it a “docu-series.”

Noted!
I’m responsible for what comes out of my mouth. What they do with those words in post, who knows! I feel like I’m in good hands. I’m an Aries, I’m a boss, I like to have control. This process definitely taught me to surrender. I had to go with the flow. It’s a great opportunity for the brand.

Presumably they asked the staff, “What do you think of the new boss?” on your first day?
Oh, they definitely did! It’s safe to say that’s going to be part of the story line. I can’t tell you what the responses were. I’ll find out when everyone else finds out. But they should do a post interview because now they know me really well.

Thoughts on former editor Joanna Coles?
She’s a force. Although I report to David Carey, she’s the chief content officer, so I’m sure we’re going to be collaborating on things, and she’s definitely cultivating and fostering more collaboration across brands. It’s a good thing.

What’s your all-time favorite Cosmo cover line?
They are too many to choose. The ones that stand out are the over-the-top funny ones from the past, such as “What to Do With an Iffy Stiffy.” It still makes me laugh out loud. I can’t believe what we got away with!

You are also editorial director at Seventeen magazine. How do you manage both responsibilities?
I spend about 70 percent of my time on Cosmo. It’s helmed in large part by its terrific executive editor, Joey Bartolomeo. Seventeen is now in a decreased publishing frequency, so it’s five times a year plus prom. You gotta have prom!

Do you think having the word “prom” in your last name helped you get the job?
[Laughs] It probably didn’t hurt. And my social handle is MichProm, so…. It’s so fun when we’re doing the prom issue, because the entire fashion closet was a sea of prom dresses. They have changed so much! I haven’t looked at a prom dress in, you know, 20-plus years, and they are much more stylish now. There’s like crop tops with a skirt! They’re all these different incarnations that are super stylish!

What was your prom dress like?
Looking back it was hideous. I went to the prom twice. One moment was a very big puffy-sleeved, like royal blue, big Talbots number of some sort, and I had crazy big hair. And then another one was more of a Madonna-esque moment. It was lace, like kind of mini-skirt lace. I’m pretty sure I had fingerless pink lace gloves and some pearls. I’m not going to surface any evidence of those.

That was going to be my next question.
They’re in a storage unit, somewhere.

How do you pronounce your last name?
They pronounce it in all sorts of ways. So, if you take the U out, it’s phonetic. That U really trips people up. So it’s Prom-ah-lay-koh. People like to add letters sometimes. Like they’ll add an N, and I’ll be like, “There’s 11 letters, there’s no need to add in there.”

What are you like as a boss?
I find that such a hard question to answer. It feels like it’s for other people to answer, and maybe I should be taking a poll to find out. I hope I’m approachable. I’m very direct. I try to be a clear communicator. I don’t dance around things; I just tell you what I want. I hope I provide some kind of inspiration. I like to have fun too, so I hope I’m seen as a fun boss.

You seem like you would be.
I hope so! I mean, if we’re not going to have fun, then what’s the point?

Marc Ecko Dishes on Complex, Then and Now