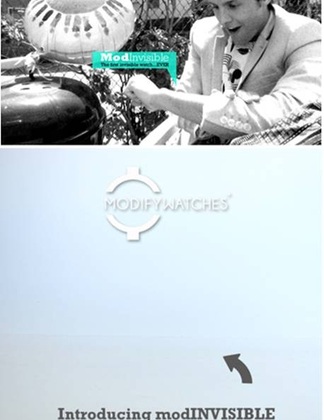 “San Francisco, CA (April 1, 2013) – Modify Watches, the trend-setting modular watch company, has long been a proponent of listening to its customers and implementing their innovative and often unorthodox ideas. After its suggestion box was overwhelmed by emails, love notes and recyclables all suggesting the same thing, Modify responded with its latest launch: the world’s first invisible watch – Modinvisible!

“I got to tell you, I didn’t believe in it at first,” said Modify CEO Aaron Schwartz, “but when the ModiFamily says they want something awesome, I say ‘how high?’” Unlike its current line of Modify Watches that come in two sizes, Modify’s new Modinvisible line allows you to specify height, weight, build materials, down to the last invisible screw. Schwartz gushed about the new line, “We really broke the mold on this one. The Modinvisible has several industry firsts including our soon-to-be patented ‘whisper movement’ technology that allows our customers to literally select one of seven silent options for the ticking noise.” “The sound of silence is so personal,” added Modify Sound Engineer, Ayo Oluwole, “so we literally let you choose the silence that fits your state of mind. Our competitors would kill for this type of technology! The best part is, we didn’t kill anyone!”

The Modinvisible line comes in 37 colors, though none are actually discernible by the human-eye. Modify’s 50 Shades of Color Expert, Michelle Mitchell spoke about her first experience demoing a Modinvisible, “When I first wore the chartreuse Modinvisible around town, I knew I would get some stares, just like our other Silicon Valley inventor colleagues. But people were pretty respectful of my wrist privacy, and it wasn’t until I heard the piercing cry of a bald eagle overhead that I knew I made the right color choice.”

The Modinvisible line of watches also yields many unexpected benefits: an end to unwieldy wrist-watch hair, no more unwanted strangers pestering you for the time, a built in sleep in/running late excuse, and an almost complete decline in the probability you will be mugged for your watch. One customer that preferred to remain anonymous said it best, “the Modinvisible gives me all of the advantages of knowing what time it is without anyone else knowing that I know – pretty much superhero power level.”

Not surprisingly, there has been a tidal wave of demand by at least one or two members of Schwartz’ immediate family since Modinvisibles were first conceived four months ago. However, the Modinvisible line will not launch until June due to a current lack of shelving space at Modify HQ. To make up for it, Modify announced that for every regular watch sold in May, Modify will give away a Modinvisible to local animal shelters to encourage civil relations between dogs and cats.

The Modinvisble line will be available on June 1, 2013 and will retail for $568.43 at www.modifywatches.com. Please follow @ModifyWatches on Twitter for the latest news on the Modinvisible line…HAPPY APRIL FOOL’S DAY!!!”