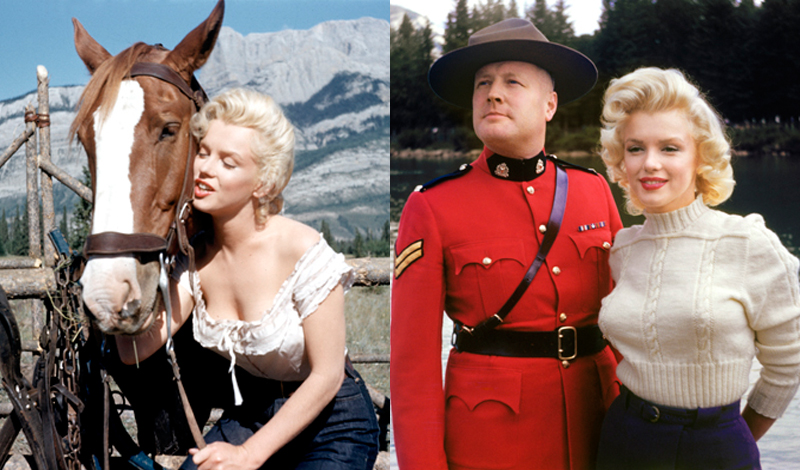 Time is limited for New Yorkers to head to the Sumo Gallery (37 Walker at Church St.) to catch “Limited Runs” The Lost Photos of Marilyn Monroe. Yup, just when you thought you’d never see another never-before-seen photo of Marilyn, more shots have been unearthed. We caught the exhibition at the opening this week hosted by Elsa Hosk and Martha Hunt and had to get more details from the curator of the collection. We rang Pierre Vudrag of Limited Runs to find out how it came together and how you can own a piece of Marilyn. It’s a must see! EDDIE ROCHE

How did you get the collection in the first place?
About two and half years ago we were setting up our website Limited Runs, and we were watching The Today Show one morning and we noticed this beautiful picture of Marilyn Monroe and it got our attention. So we started listening to the show and heard an auction house was auctioning off this set of photos by Marilyn’s makeup artist, Allan “Whitey” Snyder. I looked at my wife and I said, “We’re getting those.” Two weeks later, we went to the auction and got three lots of photos; we walked out with 60 photos. One thing led to another, we met Lani Carlson before he passed away and he had 15 photos so we started working with Lani, Milton Greene’s photos came up at auctions, hundreds of thousands of his photos went up for auction and we acquired 12 Marilyn photos.

Who are all the photographers in the exhibition?
Allen Whitey Snyder, Lani Carlson, a guy named Mischa Pelz, who took the photos of Marilyn in the white bikini on the lawn furniture, and Thomas Kaminski, who worked on the set of The Misfits and took three photos on the set while filming the movie, and Milton Greene.

How did these guys have access to shoot Marilyn?
Allan “Whitey” Snyder met Marilyn in 1946 when she did her first screen test at 20th Century Fox; he did her makeup for the screen test. They were friends and worked together professionally, personally through her life. She had an arrangement with him; she said, “If I die before you, you have to do my makeup,” and he did. So Allan was there every step. Milton Greene shot all the covers for LIFE, Look, he was the guy. So they hired Milton Greene to photograph her for the cover. It was the first time the two of them met. He sent her the proofs the next day of the photos and she falls in love with them. She sends him a dozen roses with a note saying that she wants him to be her personal photographer because they’re the most beautiful photos she’s ever seen. So the two of them worked together very closely for many, many years. Those photos of her in the chinchilla coat with the hat? Milton took those pictures and he discarded them. He didn’t think that they were suitable to be published. Someone asked me, ‘Why would he think that was an outtake? They were beautiful,’ and what I have to remind people of is that in 1955, Marilyn wasn’t the Marilyn we know today. Milton is really the guy who started to hone in and craft that image of her–sexy, alluring, and stylish sex symbol–he helped create her as a sex symbol.

What about Lani Carlson?
Carlson was not a professional photographer. He was actually a recording engineer who worked at Capitol Records. He recorded everybody that was at Capitol in the ’50s and ’60s from Frank Sinatra to Nat King Cole. In fact, he was the guy who did the very first stereo recording at Capitol Records in the late 50s. He pioneered stereo recording at Capitol Records. But he was hired to go to that party in 1952 to do the sound and he set up the sound and after it was setup, he looked at his partner and said, ‘Take over. I’m taking off.’ He left, came back 15 minutes later with a bunch of cameras, and said he went to his car and took a shot of scotch because what he was about to do was really ballsy. And what he did was he walked right in with all his cameras, walked past all the other professional photographers that were there, went right up to the 20th Century Fox publicity people, and he flashed a Chicago Tribune badge that a friend of his had given him and he said, ‘Listen, I work for the Tribune, I need Marilyn exclusively for a half hour–I gotta get these photos out on the AP wire,’ which you are probably aware is the national press. She was just in the middle of shooting the film Niagara, where she had a starring roll. Fox knew she was going to be big. So they agreed to give him the exclusivity for a half hour. Afterwards, he put the photos in an envelope, stuck them in a shoebox, and kept them in there until 2010.

Why do you think he never printed them?
He did! He went to the shop, printed them, looked at them, and stuck them back in the envelope. Because the thing about it was, this was 1952, Marilyn wasn’t Marilyn. Lani would do this constantly. He was the most interesting guy I’ve ever met in my life; fascinating guy. At 96 he had the sharpest mind, he could remember every little detail of his life. His body went, not his mind, which is unusual.

Could he have sold these photos and made a lot of money?
Back when Marilyn was Marilyn, when she was alive, you sold the photo, it went to press, and then a couple days later it was old news. Collecting celebrity photography hadn’t really caught on–I think it just started in the last 10 years. People see value in nostalgia. Also, I think there’s something about celebrity photography–it’s starting to have credibility.

How do you decide where you’re going to start, in terms of pricing, when you auction this stuff?
We were debating whether or not to do an open edition and then we realized, one of the reasons we were putting out this collection is we wanted people to see a different side of her. The photos that Alan took, she knew they were never going to be published. He wasn’t taking those photos so he could run out and try to sell them to a magazine; they were just friends. So I think what you’re seeing is a side of her where there’s no pretense.   Our approach when we did this was we wanted to get this out; we want people to see it. Obviously we knew there was a market for it but we also realized that we could set the price really high, but who’s going to buy it? We want people who are fans to buy it.

The photos appear untouched.
Even in the ’50s they would have gotten rid of the fuzz. On some of the photos there’s a little mole on her chest and when I saw that for the first time, I was like, ‘What is that?’ and the people we were working with, like Milton Greene’s son, Joshua Greene, said, ‘Oh yeah, she had a mole right there. My dad used to remove it all the time in the dark room.’ And what we did not want to do–because we spent two years working on this–we did not want to change anything even though we digitized everything. The only thing we did when we digitized was clean up scratches and cracks in the negatives and correct the color to get it back to exactly the way it was when the photos were taken. No Photoshop at all. Nothing moved, nothing added. We wanted them to be exactly the way they would have been seen in ’50s to ’60s when the photos were taken.

Why did you decide to show this in New York?
There were two reasons; I’ll be blunt. We wanted to promote our website but the other thing is we thought it was important to take the show around to people. So we did it in San Francisco, we’re in New York; potentially we’re going to be in Houston, we’re going to be in Vegas, Miami, and Palm Springs. And we’re looking at Europe next year. The idea is to get it around. What’s different about us compared to most galleries is since we’re online we are not locked into a single gallery space.

What is Limited Runs?
Limited Runs is a website that sells original, vintage posters, including movie posters, advertising, and rock ‘n’ roll posters. And what we also do is we sell fine art photography, limited-edition photos. And we’re the only website that does that, that sells that combination of things. The idea of the website when we did that was, somebody may collect photography but you may love Marilyn Monroe and you may want to buy a photo but maybe you didn’t know you could buy an original movie poster from Some Like it Hot or Niagara. Or vice versa, we know a lot of people who were looking for movie posters, and suddenly they run across photographers. We don’t do reproductions. Same thing with the photos. They’re all fine art prints–archival and high quality. We don’t do anything cheap.

Will you turn these photos of Marilyn into a book?
We’re working on it. Actually, the book was one of the first things we were doing, and we’ve talked to a couple different people, but we want to find the right publisher who gets what we’re doing. It’ll be a book sometime by the end of next year. It’ll have everything that we have. We have over 100 photos. This collection in New York is 26 photos, and on our website there are 38 photos, but there’s over 100 shots of what we’ve acquired so far.

How long is the collection in New York for?
Until Saturday. Then we move on to Houston. We told people in San Francisco, you’ve gotta get there because she’s leaving! And people got there.

Are you a big Marilyn fan yourself?
Of course, who isn’t?

Thank you so much for the opportunity to see these photos. Even the heroic features of the Canadian Mountie or the majesty of the loved animals can match or compare with the eternal and glorious beauty of Marilyn Monroe who is Gods supreme creation.