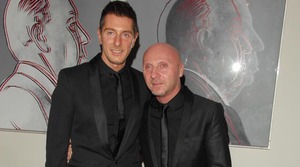 (NEW YORK) Domenico Dolce and Stefano Gabbana were denied appeal and their fashion house was slapped with a fine of $440.2 million by Italy’s Tax Commission. The duo got charged for transferring control of their brands to a shell company (a company that exists but does not actually do business or have any assets) called Gado Srl in Luxembourg in 2004 and 2005. The transfer allowed the designers to avoid paying a total of roughly $550 million in taxes to Italy.

The Sicilian designers aren’t the only fashion heavyweights trying to escape heavy taxes. In January, LVMH head honcho Bernard Arnault, who happens to be the richest man in France, moved himself and his fortune back home to Belgium to avoid paying France’s new socialist super-tax. However, Arnault claims the move was related to family inheritance reasons.

Dolce and Gabbana were initially freed of the sentence by a lower court in April 2011, but the decision was eventually overturned by Italian Supreme court in November of that year. In January, the designers already paid $121 million in taxes in a separate probe relating to an investigation by the IRA for unpaid taxes from 2004 to 2007. Bonne chance with avoiding legal woes for the near future, boys!

Kate Moss Gets Her Peru On