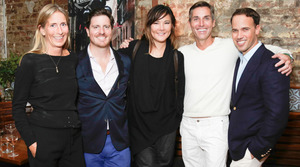 (NEW YORK) It’s not every night that a cocktail affair involves bringing your passport instead of, say, adhering to a dress code or something of the ilk. Befitting for a Conde Nast Traveler event, however, thrown by freshly-minted publisher (and 4 Times Square stalwart) Bill Wackermann at Tertulia. The potential party favor? A half-dozen luxe, all-expenses-paid jaunts to global destinations like Berlin, Madrid, Buenos Aires, Milan, Cancun, and Antigua…the flights for which took off this morning.

The cause for such generous celebration? The glossy’s new campaign, “I Am A Traveler,” and one of Conde’s buzziest recent publisher-EIC match-ups: Wackermann and former Martha Stewart Living editrix Pilar Guzman. The campaign’s posse of tastemakers, Miies Redd, Nicholas K’s Nicholas Kunz, Anne Menke, and the Seamus Mullen, the latter of whom doubled as campaign co-star and host, sort of, as the swelling crowd (there was even a line to get in!) was packed into his restaurant.

Those who waited it out around the shindig’s half-way mark, around 8 p.m. (to the amusement and curiosity of passerby on this mellow West Village stretch of Sixth Avenue, fairly unfamiliar with the step-and-repeat circuit) had a shot at jetting off. Wackermann stood on a banquette around then with mic in hand to announce the winners. Proving Wackermann would make a great game show host should he decide to bail on this whole publisher thing, he pulled out the lucky names and described the destinations with aplomb. From the winning klatch, there were “Oh my God!” shout-outs and squeals in the process, punctuated by a few re-draws for the no-shows or early-departers. (Proving that this certainly wasn’t a party to be too fashionably late arriving to, or dip out of early.) The less-lucky attendees got through the drawing process (and coped with not winning) thanks to copious pours of Malbec and prosecco. Those who deal best with stress via carb-loading plucked pan con tomate off butcher boards, and carnivorous types gorged on a plate piled high with jamón Ibérico.

Alas, your Daily didn’t hop on a plane today (we probably wouldn’t be here to recount last eve if we had). But there’s always next year…
ALEXANDRA ILYASHOV

From The Daily Coterie: Kate Spade

The Boys of Summer Are Back!

The Daily Celebrates the Holidays with Lands’...

Where the Boys of Summer Are