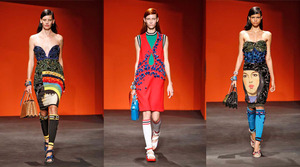 (MILAN) Prada
Miuccia Prada, never one to shy away from a strong sartorial idea, got graphic with it this time around. And boy, did she have fun in doing so! A simple, long-sleeved top featured a built in bra-top detail which stood out in bright hues, while pop-art portraits decorated dresses, skirts and even fur coats. Sometimes the faces were covered in celebratory sequins, as were the bra-top options. An interesting feature of note? A lack of trou on the runway, keeping the focus on a singular silhouette, as captured by pencil skirts, pleated skirts, and dresses that varied in shape from strapless to shift. Jackets were also part of the offering, with big round buttons and cropped sleeves, done in hues of army green and royal blue. Fur was key, too. Other motifs included a fresh spin on Hawaiian prints and many, many takes on the pop-art face that we will surely be seeing much of in the upcoming months. The collection’s sportif touch involved a 100 percent attendance rate of ribbed and striped legwarmers on the legs of models. There were also athletic dresses cut in silk, covered in sparkly gems and baring the midriff with a petite tear drop. The lot of it was trotted out in front of murals by Miles ‘El Mac’ Gregor, Mesa, Gabriel Specter and Stinkfish and illustrators Jeanne Detallante and Pierre Mornet. Also of note: Miuccia has made it clear with her latest offering that boxy, structured handbags are definitely here to stay.