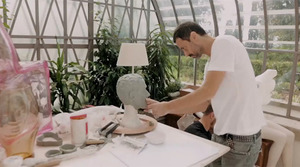 Interview and Persol celebrated the international premiere of Chiara Clemente‘s film Atelier Persol on Thursday night at Hotel Americano’s La Piscine. Dan Ragone, Keith Baptista, Tara Subkoff, Leandra Medine, and Christopher Bollen were a few of the boldfaced names who watched the short film described as a tale of inspiration, craft and imagination from the perspective of 8 unique artists, but it was a Fran Lebowitz sighting that brought the cool factor. Fran!!! As most of you know (we hope) Fran was a Studio 54 regular with Interview founder Andy Warhol when it was THE place to be and had her very own column for the mag back in the day. She’s Interview legend. Here’s the trailer for Atelier Persol.

Mud At The MoMA? Oui!