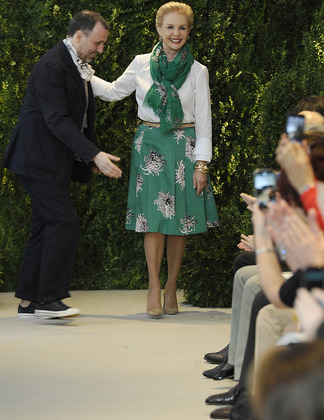 It’s wedding week! Carolina Herrera fills us in on her walk down the aisle and the advice she gave her daughters on their wedding day.

What did you wear on your own wedding day?
I married when I was 17 or 18 and I wore a very pretty long white dress., that was my first wedding. When I got married the second time, I wore a short French dress in a very pale yellow with white appliqué flowers.

Did you have a “first dance” song?
No, no. When I got married there was not such a thing as music or dancing [at weddings]. Not like there is now!

How did you celebrate your anniversary?
I usually forget about my anniversary! It’s very funny, because sometimes my husband and I say, “Oh gosh! What day is today?” But marriage isn’t about that, anyway.

What advice did you give to their daughters at their weddings?
I told them, “Love and respect. Love first, then respect, then friendship. That is the key.”

Which one of your daughters was the most particular about her wedding dress?
[laughs] The second one, Anna Luisa, knew exactly what she wanted to wear, but she was right, and we had so much fun. It was difficult for me, because I was the mother-of-the-bride and the designer of the dress. That’s a big job!