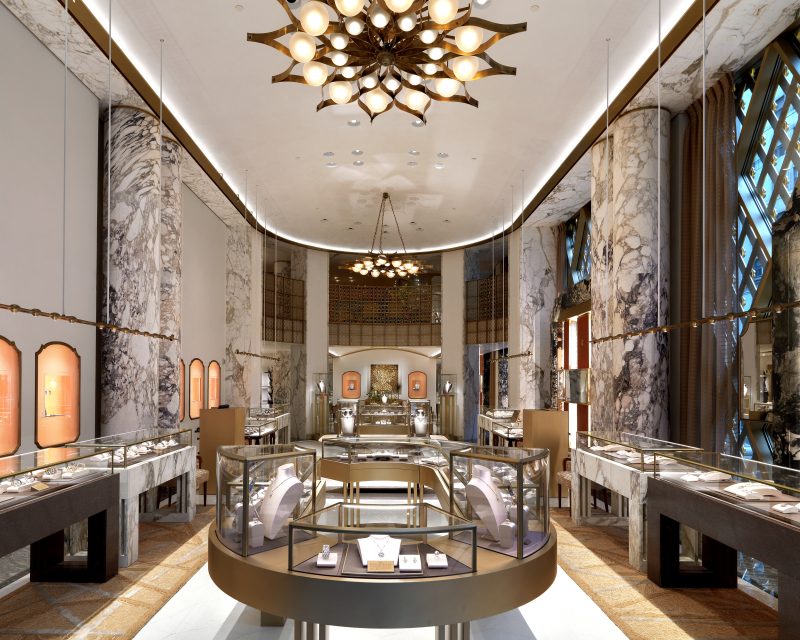 Bulgari unveiled its elaborate redesign of its Fifth Avenue flagship in New York yesterday. The new Peter Marino-designed store features a door that is a reproduction of the Baroque Via Condotti door from 1930 and is arguably the structural jewel of the new boutique. The exterior of the store was inspired by the design of a heritage bracelet’s clasp from the 1930s and is decorated with bronzed flowers that are handmade in Italy that are complete with lights so the store can dazzle both day and night.

Inside a star patterned white Lasa marble mosaic adorns the floors and the two oval shaped counters in galvanized iron are inspired by the renowned Italian architect Carlo Scarpa. Influences of Italian designers can be seen throughout the store. “We have a mix of Italian masters of design as well as new modern designs by Peter Marino,” said Silvia Schwarzer, Bulgari’s Interior Design Director. “The chandeliers, were in the Parco dei Principi hotel’s ballroom in Rome and were designed by Gio Ponti in 1960. They’re original. We also have Gio Ponti furniture. Other elements like the staircase, the pantone mesh featuring the Bulgari eight point star—those were designed by Peter Marino, so the mix of the two is very important for us because we start from our roots but are always looking to innovate.”

Upstairs, on the mezzanine floor, is a lounging room inspired by Salottino Taylor—the room where Elizabeth Taylor would spend hours perusing jewels as she escaped the paparazzi. The room is inspired by the ’60s with vintage armchairs by Osvaldo Borsani, plush blush sofas, and coffee tables in onyx. The collection cases sit atop marble tables also by Borsani as well as Angelo Mangiarotti.

“Everyone that has come up to the mezzanine since we first opened has been marveled by the hospitality and the décor and the architecture, but most importantly in terms of the actual jewelry—how they were displayed,” said Daniel Partridge, Bulgari’s North American brand president. “We have some vintage pieces of Bulgari jewelry, which were designed in the early 1970s to commemorate the brand coming to the U.S. in 1972. These pieces were quite bold and daring at the time and they are just as relevant and just as iconic today. They gave us a lot of inspiration in designing the capsule collection for the store.”

Bulgari’s creative director Lucia Silvestri, who created the new capsule collection featuring stunning lapis, coral, and diamond creations (red, white, and blue to honor America), said her favorite piece in the collection is an exquisite bracelet of the same material. “It’s almost three-dimensional and it’s very soft and sophisticated and its so New York,” said Silvestri. “This kind of craftsmanship is something only Bulgari can do. I really wanted to do something special, but you know it’s difficult because even in the ‘70s we did such extraordinary pieces. Those pieces are still very modern. So I wanted to do something with the same spirit but very contemporary.” The new collection also features 19th century American coins instead of the brand’s traditional Roman ones.

Silvestri, who has been with the company for more than 38 years, sat down with The Daily  and revealed how she got her start at the legendary jewelry house. “It’s a long story…it’s a love story. I started very young. I was actually studying biology at the time, but I met the Bulgari brothers—my father was very close with the family—so he introduced me,” said Silvestri. “I ended up at Bulgari as a secretary, nothing to do with gems, and when I entered into Mr. Bulgari’s office he had a big table full of gems—full of colors, full of energy. I immediately fell in love with the stones and I started to touch them and play with him. He was very shocked that I was so fascinated with the gems. At a certain point he told me, I need a very young person that can follow me and help me pick out only the special gems, so if you like you can come with me and see if you like this role. That’s how I started my career at Bulgari. I have to say, I’m still in love with the company, the family, and the jewels. I’m especially happy to be here, because New York is a big market for gems. It’s like a second home.”

Bulgari has big expansion plans for the U.S. market. The luxury brand has already opened its first Pennsylvania boutique at the King of Prussia Mall in April, reopened its renovated Michigan Avenue boutique in Chicago in June, and has plans to open a new boutique in Boston by the end of November.

Bella Hadid Is the Face of Bulgari’s...