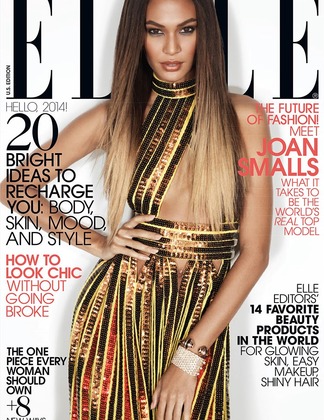 Earlier this week we celebrated the Joan Smalls‘ ELLE cover at a dinner at Indochine, but here’s a look at the actual cover of their January issue shot by Michael Thompson. Do we love or do we looooove? No offense to every actress who has fronted ELLE, but it’s refreshing and brave of them to go with a real, bona fide mod who we first put on the cover of The Daily in September 2010, but might not be a household name yet in, say, Kansas. We do learn inside the issue that Smalls has intentions to join the ranks of Reese, Katie, and Scarlett and become a thespian. “I want to be clear that I don’t want to act just because it’s the typical move for a model,” Smalls reveals. “My desire comes from a place of wanting to entertain people on a different level.” Check out our interview with Smalls where she told us about appearing in a music video with Ricky Martin and her trashy TV habits at the time. You’ve come a long way, kid.