Best of The Daily: V Is For Victory! With Stephen Gan 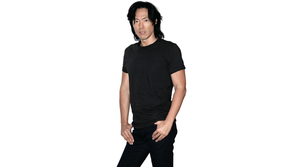 (NEW YORK) Jonesing for some chic reading material during the holidays? Fret not! The Daily is bringing you a slew of our greatest hits from 2013. First up: The cover story of our September Media Issue, aka the Fashion Magazine Of The Year winner at our first-ever Fashion Media Awards. A beacon of originality in a sea of fashion followers, the bimonthly miracle that is V reflects the relentless creativity and independent spirit of its founder, Stephen Gan. In case you haven’t noticed, he’s winning.
BY ALEXANDRA ILYASHOV

Why did you launch V in 1999?
We had been doing Visionaire for nine years, and were beginning to fit into a mold of being a collector’s item. Every issue was getting more elaborate; the kids in the office were complaining they couldn’t even afford a copy. Visionaire thrived on its exclusiveness, had a very elite clientele. It was the couture of the publishing industry. But just like  a designer, we needed a ready-to-wear line, too.

What did V set out to be?
A real magazine that you could buy on the newsstand, that had advertising, and that reached a younger crowd. Something more accessible than Visionaire, that told stories. We were trying to do a magazine for the new millennium.

It was initially a broadsheet. Why?
I wanted V to feel very deluxe and throwaway at the same time, like a very glamorous newspaper. It was meant to be a cool club magazine that had never existed before. If we were around during the days of Studio 54, this is the cool newspaper you’d pick up at the door. It was only 32 pages, Jude Law was on the cover, and the cover story was one spread.

How long were you plotting?
It probably took a couple of months. It was not that premeditated. I loved its spontaneity. I was at an age where I could say to myself, “I just dreamt up this magazine, now let’s go do it.” You’re very brazen when you’re younger. You do things without thinking. It’s how things get done! Nowadays, there are marketing surveys, and you plan things a year in advance. That was so not the case with V.

Was it a hit from the start?
Some people loved it, and some people didn’t get it. I remember someone in the industry called it a downtown rag. It just killed me. I wanted it to feel on the ground, but still upscale, sophisticated, and glamorous. To me, fashion was never just thrift shops or secondhand. It’s about Chanel, Vuitton, Dior, and YSL. It’s about incredible things shown on a runway. We used to call it fashion with a capital F.

Who did you want to read it?
My vision of the V reader was a young, cool girl, an underground kid. But even if she hung out downtown, she’d go to clubs uptown. She was saving up enough to buy a Vuitton bag. Soon after starting V, I saw this skateboarder buy a copy: He left the newsstand with a skateboard in one hand and V in the other. I felt like his next stop might be YSL—that maybe he’d saved up to buy a really great motorcycle jacket there. I felt like that reader existed.

Why did you decide to call it V?
I loved it graphically. I’m an art director at heart! I pictured the letter taking up the whole page, and thought that would be so unique, instead of having the magazine’s title as a headline. I wanted the letter V to become its own poster and image to sell the magazine.

Who did you first tell about V?
Mario Testino, Carine Roitfeld, Karl Lagerfeld, and Hedi Slimane were the first four people to hear about the magazine, and they worked on the first issue. Jude Law was photographed by Testino, styled by Carine, wearing YSL by Hedi Slimane. Inside, Karl was a contributor.

Who else has been there with V since the beginning?
Iman and David Bowie. They’re our fashionable fairy godparents! David is a really big magazine collector; he’s got lots of Sixties magazines. When we first opened our office, they just called up one day, back when no one cared about V. They said, “We love what you do, we’re gonna be by this afternoon, in an hour.” They were also in the very first video we put on our website.

Anyone else who’s a V lifer?
Inez and Vinoodh: They’ve been really important from the very beginning. They were totally on the same page as I was.

How so?
We were so sick of seeing uninspired looks in magazines, filled with a grungy look of dirty hair and no-makeup makeup. We had a serious conversation about bringing the gloss back into fashion. The feeling was, “Bring back the brush!” We loved the Helmut Newton–type woman who wore lipstick and heels.

What’s your favorite shoot you’ve done with them?
They did this double spread of one incredible portrait of Riccardo Tisci, before he unveiled his first Givenchy collection, entitled “A Star Is Born.” I felt so strongly that he was going to be a force to be reckoned with. He was this shy boy, and we’ve watched him grow up.

Any other discoveries of note?
We did Kate Upton’s first big story in 2011. Ivan Bart from IMG said to me, “Please, please, please, you’ve got to meet this girl!” All she had were Sports Illustrated pictures. There was nothing from fashion. Nobody wanted to shoot her, because they thought she was too commercial and that she wasn’t good enough to be a Victoria’s Secret model. I took a liking to her, and Carlyne [Cerf de Dudzeele] and Sebastian [Faena] did, too. Carlyne threw her in a Michael Kors white swimsuit, a gold belt, and some heels, and the rest is history.

Why did you speak up for Kate?
I love characters! I love people who are out of the ordinary.

Why did you decide to put Miley on your summer cover?
Miley was the only one, out of 85 celebrities, that we invited to the office, the same way I had dinner with Gaga, just to meet her, six months before we did that cover. I had such a feeling that Miley was about to do something. I felt like she was going to change her whole look, or do something really different. Then one of my editors showed me pictures of her with shaved blonde hair, and I was like, “Oh, my God, that’s it! She’s one of us!”

How did the shoot go?
It was worlds colliding! There’s just something ab
out Miley. She arrived at our office dressed in Margiela from head to toe, and she immediately recognized my Comme des Garçons jacket and said she’d been wanting to buy it for Liam [Hemsworth]. This was Miley Cyrus, who you wouldn’t think would be so fashion-conscious, and that to me embodies the type of reader I had visualized. You just keep hoping for it to touch someone.

How did Miley get along with Carlyne, who styled the shoot?
Carlyne came to our office the same day we met Miley, and the two of them just hit it off. Miley going through Carlyne’s racks of leopard prints and fake fur was a moment to remember. Carlyne put such joy into the issue. It’s really about promoting personalities and characters, like Carlyne. She’s such a talent. For a Miley Cyrus fan to discover Carlyne through this story in V? That’s genius. She did a shoot featuring Joan Smalls as Tina Turner, and it’s just so Carlyne. We decided to put in pull quotes from Carlyne throughout the story. I want to promote people like Carlyne as stars.

How did you first cross paths with Carlyne?
She did a story for us three or four years ago, about footballers’ wives, or WAGS. Dree Hemingway was wearing full-on leopard, head to toe. It was the magazine’s 66th issue, and I felt like we finally got there, in terms of bringing glamour back to fashion. Carlyne worked on every image that inspired me growing up

What makes for a tough cover shoot?
Getting a celebrity who’s not game enough. At V, the attitude is, “Why are we going to do this if we’re not having fun?”

How would you sum up your taste?
I tend to like things bright and loud. I lean towards being a maximalist rather than a minimalist. I grew up at the tail end of grunge and minimalism, but I’m more from the school of glamour than from the school of downtrodden fashion. My eye just goes to brighter, sparklier things.

Do you ever feel uncreative?
All the time. It’s my biggest fear. Every creative person has to face feeling blocked. You just have to hope that something will blossom. Ideas are both the cheapest and the most expensive things to have in the world—and in our line of work, they’re the most vital thing.

How did it feel to nab an FMA?
It’s an honor that you’ve chosen us. When you’re starting out, you think you can do whatever you want. The truth is, you have to have been doing something for a certain number of years and a certain number of times to have conviction about what you do. When I was an impatient, young person starting out, I always wondered, “Why isn’t it happening yet?!” You have to put in the time.

How to Make It in PR According...