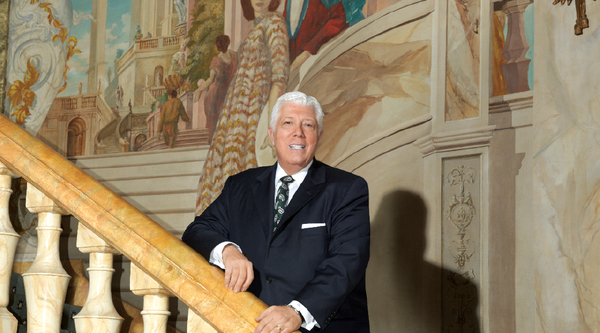 (NEW YORK) Can you believe it’s been 30 years since baby-faced fashion furrier Dennis Basso started swaddling the chic set? In the face of such a momentous milestone, there was only one thing to do: hail a Town Car up to Sirio at the Pierre hotel for some serious old-school dish. Happy birthday, Basso! Make a wish…
BY EDDIE ROCHE

Waiter: Can I get you a drink?
I’ll have a Grey Goose martini, no olives, clean, shaken.

Is that your signature?
Yes, always.

Congratulations on 30 years. How old do you feel?
I feel 30. The brand feels young, too. We’ve had a long and fun journey. I feel like I’m in the middle! Some friends who have been in the business as long as me feel ready to wind down. I feel like I’m just winding up! Many people don’t get to do what they want to do. I’m living my dream.

How did you get your start back in 1983?
Before I even launched, we were doing at-home “fur parties” and I would take various collections and rent a big car and fill it up with different furs. It was like a Tupperware party, but with fur. It was quite successful. We created a clientele and then, when I went off on my own, they came with me.

Ivana Trump was at your first show…
Yes, she was! At the Regency Hotel. It was very exciting. Angela Taylor, who is no longer with us, was a fashion writer at The New York Times and gave us a half-page with three photographs. What’s exciting about doing this shoot today at the Pierre hotel is that I did a multitude of shows here. I feel very at home at the Pierre. I also got married here!

Where’d you get the dough to go it alone?
I’m an only child, and when I went into business, my parents were very generous. They supported the whole situation. My father probably thought all those tens of thousands of dollars were to buy skins, but he didn’t know I was using it for PR and fashion shows. Without them, it wouldn’t have been possible.

Shows and PR have changed quite a bit in 30 years. For the better?
It’s totally changed! Today fashion is viewed differently. Fashion shows are live-streamed! You show your collection and 15 minutes later you read a review. It’s instant everything. I don’t know how good it is. I’m not sure. There was something about the allure of not having everything being so instantaneous. That’s the way of the world, but I like to think of myself as somebody completely contemporary who has moved with the times. Many of the daughters of my original clients are now my clients. Ivanka Trump was four when I met her and now she’s a client. To transcend that client, you better be busy with that Instagram!

Do you Instagram?
No, but I’m doing all the rest. I haven’t switched over to the iPhone yet.

Come on, Dennis!
I can’t type on it! It takes too long. I’m still an AOL guy! Every person at my company has an address with their name at DennisBasso.com, except me.

When did you know you’d made it?
The celebrities! I’m talking 20-something years ago. I did something for Barbara Walters, Zsa Zsa Gabor, Jaclyn Smith, Elizabeth Taylor—all of ’em. I’m designing for the most glamorous women in the world. This is something quite amazing! Being approved in the CFDA was a wonderful thing for me, and when I first showed at Mercedes-Benz Fashion Week and opened my first Madison Avenue store. I also remember my first Daily cover, but that was years later! When Meryl Streep wore my coat in The Devil Wears Prada and to sit there in the movie theater and see her opening a movie wearing something I made? It was a wonderful sense of accomplishment. I’m never jaded. Things excite me daily. I’m excited to be here talking to The Daily. I even wore a new tie!

Your show always feels like a real fashion show…
Women come to my show dressed! It’s a high compliment. What’s most unique about my show is that the clients who are there are really friends. There’s that same feeling at Mrs. Herrera’s show, Mr. De la Renta’s show. There’s a warmth in the audience. They aren’t looking at it with a critical eye; they are looking at it through a friend’s eye. That’s always a nice thing.

Were you a party boy in your youth?
I had my fair share of nights out. I still like to go out!

What’s the latest you’ve been out recently?
We were out in Beirut a few months ago until 4 a.m. To them that’s like 11 at night. I was in London a few weeks ago and got back to Claridge’s at 2 a.m. But in New York, it’s dinner and home.

No pit stops at Barracuda?
I don’t want to be all “been there, done that,” but I’m more interested in going to places like the Top of the Standard. That’s a little more appealing. I like a good house party.

Getting back to your career: You’ve made some bank at QVC!
I went there in 1993, and at that time most designers were not doing secondary lines. Today it’s very popular for designers to do a line with H&M or Kohl’s, but it wasn’t back then. I love show business, and this was a wonderful combination. The customer understood me and I understood the customer. Twenty years later, we’ve had an unbelievable journey. On television, it’s possible to sell four or five thousand pieces of one style. QVC is on par with the major department stores.

Do you get a rush being on live TV?
It’s the most exciting thing you could possibly do!

How has your husband, Michael, contributed to your success?
He’s part of the Dennis Basso world, and he’s extremely grounded. He’s kept our home life as private as possible. We’ve had a great journey together. It really has been so incredibly fun.

Bryanboy Says Fur Is “the Most Sustainable...