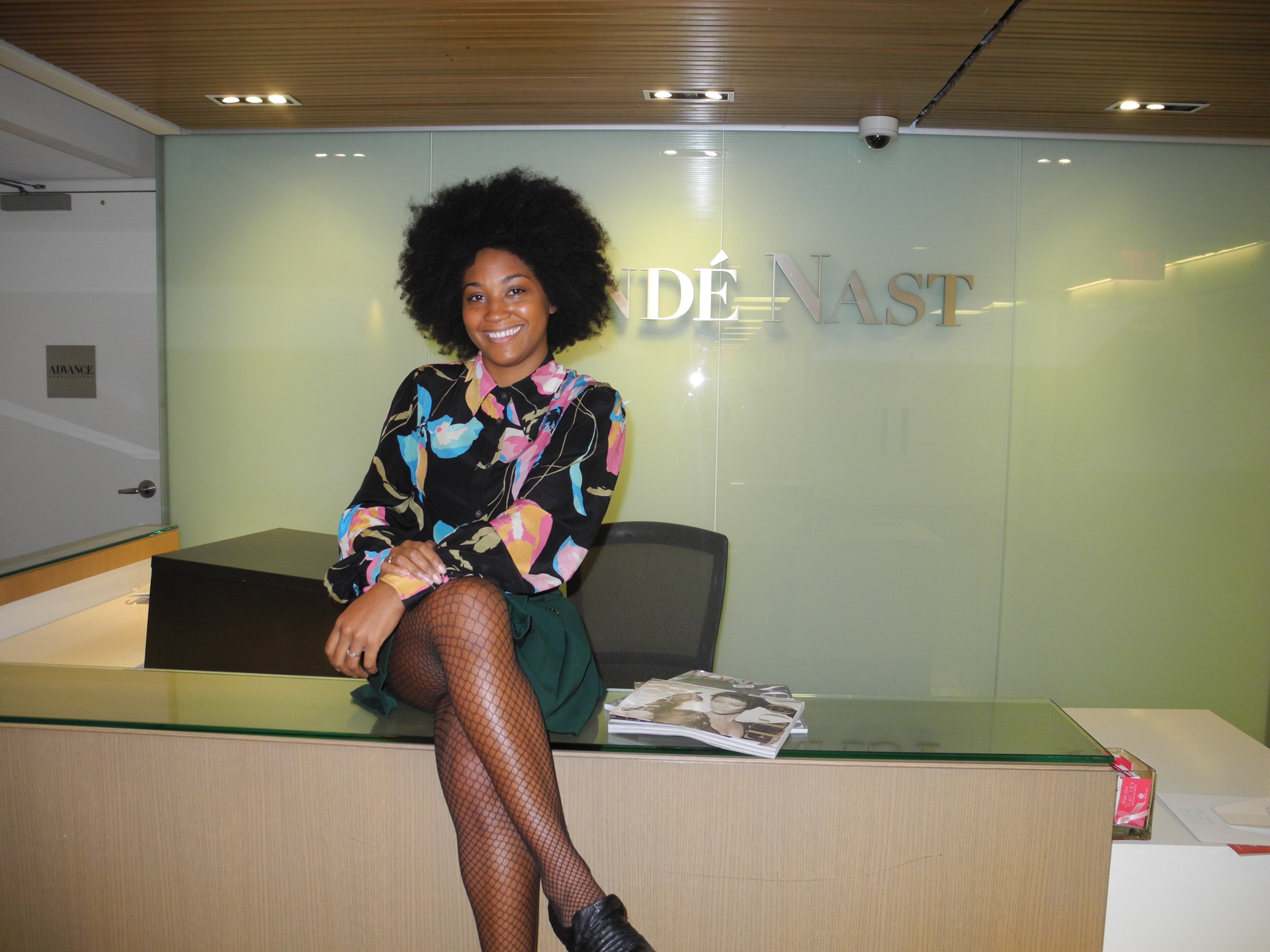 Think those glossy fashion shoots, featuring leggy models and loads of au courant clothing are easy to create? Solange Franklin will tell you otherwise. She’s the assistant to super stylist Giovanna Battaglia, and helps her put together knockout spreads for the likes of W and Vogue Japan. When she’s not jetting around the world, armed with trunks and her styling kit as Battaglia’s right hand, Franklin takes on gigs of her own. This is one assistant to keep your eye on…

Tell us about yourself!
I grew up in Des Moines, Iowa. I’m a Midwest girl. I went to school at Mount Holyoke, where I studied African American studies with a concentration in literature and economics. I was actually pre-med for the first two years and I completed internships in microbiology, and biochemistry. But I wasn’t happy in the lab and I had about seven more years in there before getting my degree. Growing up, fashion was something I was interested in, but it was never a real profession to me since it wasn’t visible in Des Moines. When I dropped pre-med, I felt it was the best time to get into fashion so I started working in the theater department and writing for the paper just to have some semblance of a fashion career.

What were some magazines you read when you were growing up?
Teen Vogue and Vogue. I did read a lot of Sassy because my older sister had every issue they ever printed. Admittedly, I first picked it up because I was looking for advice on what it was like to kiss a boy, but I quickly found out Sassy’s not a good magazine for that kind of advice.

How did you end up in New York?
After college I started applying to as many internships as I could. I was looking for anything that would allow me to break into fashion. My mentality was ‘I will work for Puppy Dog Magazine, if it’s at Condé Nast’. I ended up getting an internship at Cookie, which is now defunct. It was this awesome parenting magazine for the Vogue girl who had a baby, so we were shooting baby Marc Jacobs alongside adult Marc Jacobs. That job gave me an appreciation for how the system worked and how the magazines function. From there I moved onto Teen Vogue and the rest is history.

How did you end up with the job with Giovanna?
I started off in magazines and then I went freelance and kind of worked for everyone from Carine Roitfeld to Patti Wilson. I was here at the International Vogue offices when someone recommended me to Giovanna’s former first assistant, because they needed a second assistant on set. That first assistant, Michaela Dosamantes, knew me from Teen Vogue and she knew I could do the job. I started off as second assistant during the summer of 2011. In November 2011 I became first assistant and I’ve been here ever since.

What does your job entail?
Primarily market work, which I love because I get to see what people are creating. That means I go out and find what’s new, what’s happening, and what the major designers are doing. Seeing the market is 70 to 80 percent of our jobs, and the rest is logistics. Of course there’s the creative aspect, but we have to do a lot of managing; we have a second assistant, and a team of interns. We have to handle sample trafficking and make sure things are coming in on time, all that fun stuff.

Which markets do you cover?
I cover New York Fashion Week and Paris Fashion Week, but Giovanna will do the big shows, while I cover the emerging markets. I really cover a million markets; I need to know what the socks are, what the jewelry is, what the sweaters are, and what the shoes are. I also do a bit of men’s, so if we do throw a man in a shoot last minute, I know who to call. I was also just named fashion editor-at-large at Paper magazine, so I’m also thinking about their market, while I’m thinking about Vogue Japan, W, and every other little thing Giovanna has going on.

Is there a particular publication that offers you the most freedom in what you do?
It’s hard with the way magazines work today, because we always have to consider the advertisers. That’s fine because it allows us to function, but sometimes that means the little guys don’t get included. In the Japanese market, they’re more receptive and we do such large stories that there’s that room for layering. In those stories, I can include pieces like shoes from some kid I found on a street in Paris.

Do you ever have to do any personal duties for Giovanna?
I’d say pretty rarely, but because she goes to a lot of dinners, oftentimes I’ll help her coordinate. If she’s going to a Dior dinner, I’ll make sure it’s on her schedule and that she has a dress to wear. Since I know her taste pretty well, I’ll usually select the dress.

Do you have a favorite shoot destination?
Tokyo, when I went two years ago. We’ve been to Moscow twice which is pretty amazing too, because it’s not some place I would have traveled to on my own.

And your favorite shoot to date?
I really like my Natalia Kills shoot that just came out in Paper. But I also love the shoot I did with Giovanna in Palm Beach, called “Swept Away”. It was photographed by Josh Olins with Jourdan Dunn and Daria Strokous on a beach. That was the first time I traveled as Giovanna’s assistant and did all the market work and found everything; I could really see my contribution. It was also the first time we really bonded and felt like we were functioning as a team. And I also think they’re incredibly beautiful pictures.

Do you have any nightmarish stories from being on a shoot?
We were in Palm Springs for a dual shoot with Emma Summerton for the “Fiesta of Solitude” for Vogue Japan and the “Selfie Absorbed” story for W’s March 2014 issue. We were so far out there, that Worldnet contracted out messengers to deliver us stuff in the desert. There was a Dior finale look being sent to us at the hotel and we were the first people to shoot it. The hotel basically accepted the package and handed it immediately back to Worldnet, so we never actually received it, even though the hotel told me they had proof it was delivered to my room. They even said they had my signature. I was like, “Am I going crazy that they lost a ball gown? In the desert? I don’t think so!” Needless to say, we never saw the dress. That shoot aged me 10 years.

What’s the biggest difference between styling a celebrity for a shoot and styling a model?
When we’re dressing a model, we’re projecting our vision onto them and they’re just the canvas for our narrative. If it’s a celebrity, we have to account for their insecurities, their body and mental insecurities, and their idea of themselves. We have to keep in mind that they’re also selling themselves, so they’ll be like “If you make me look like a rag doll, I may not get the role that I want,” even though editorial might think it looks stunning and provocative.

What’s your favorite part about your job?
Being in the market, pounding the pavement and seeing the emerging designers. Then, of course, seeing the glossy finish.

What’s your least favorite part of the job?
Returns!

Do you have any pet peeves about your gig?
There’s nothing I hate more than working with people who harp on what could have been. So many amazing shoots happens with limited resources, so you always have to make it work, because ultimately when you open up the magazine the reader doesn’t know the prop stylist canceled the morning of or that 83 trunks went missing. Our job is to make it look like it’s flawless.

Where do you see yourself in five years?
Well, I think with the hybridization of fashion, nobody has just one role, so I’m definitely open to what that could look like. But in my mind, I’d love to be some type of style editor.