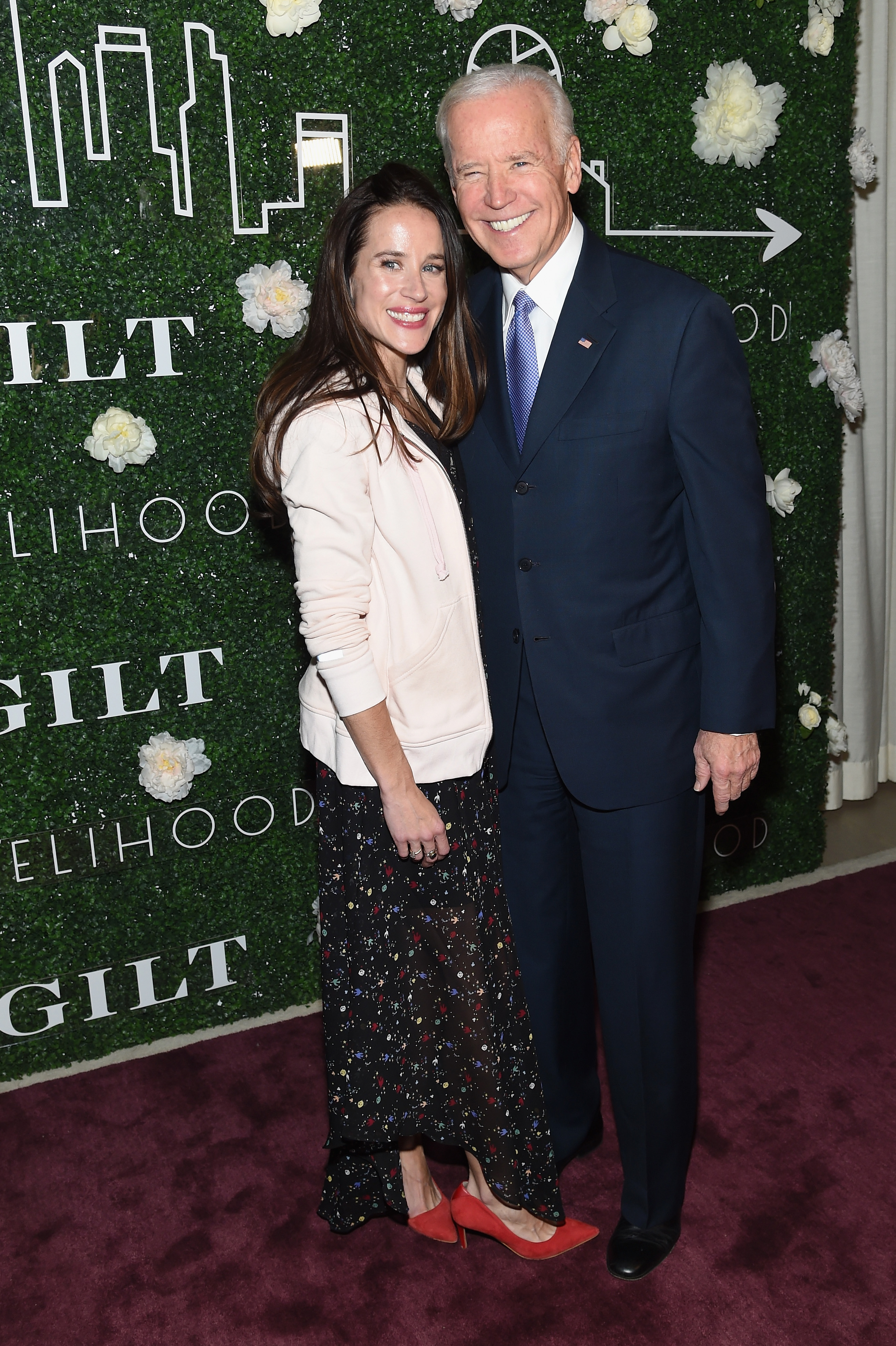 While Ashley Biden has an impressive 15-year (and counting) career in social justice, the daughter of former Vice President Joe Biden has another passion: fashion. Ashley, who runs the Delaware Center for Justice, is combining her interests with a new LLC, Livelihood, and a hoodie collaboration with Gilt. Gilt x Livelihood officially launched last night with a kickoff event where her dad and mom Jill Biden came out to support. Here’s everything you need to know about the collab, her dad’s personal style, and what you can expect next from this father-daughter duo.

Ashley, what sparked the idea to launch Livelihood?
I’ve dedicated my whole career to the realm of social justice. I received my masters in social work from The School of Social Policy and Practice at The University of Pennsylvania. From a very young age my passion has been social justice and looking at structural inequality and institutional racism. One of the things I’ve seen throughout the 15 years of my experience, through my studies, and also campaigning with dad and mom, seeing all walks of life, being in different areas and neighborhoods, and meeting various people, was that the root cause of a lot of social ill is poverty. One of the things I see a need for is funding for economic development in areas that have experienced divestment of resources as well as lower socioeconomic areas. Livelihood married my passion for social justice and also my love of fashion.

How did you link up with Gilt?
I was at a Father’s Day luncheon/award event in New York City, and dad received a Father of the Year award and I introduced him. After, I was in the receiving line to take pictures with Dad, and I was literally running for the train. I’m counting the line and three gentlemen stopped me and said that my speech was great and asked about what I did for work. One of the guys was Jonathan Greller, the president of Gilt. I said, I have a business idea that I’ve been playing around with, but I’m running late and I know you don’t have time. He said, Give me The Readers Digest, so I broke it down for him, he handed me his card, and I was in his office two weeks later. One of the things about Gilt is that they’re known for their expertise, design, and e-commerce, and I was really looking for a company that could develop a collection of hoodies that would design, source, and produce in the United States. I thought Jonathan and his team were the best to do that. 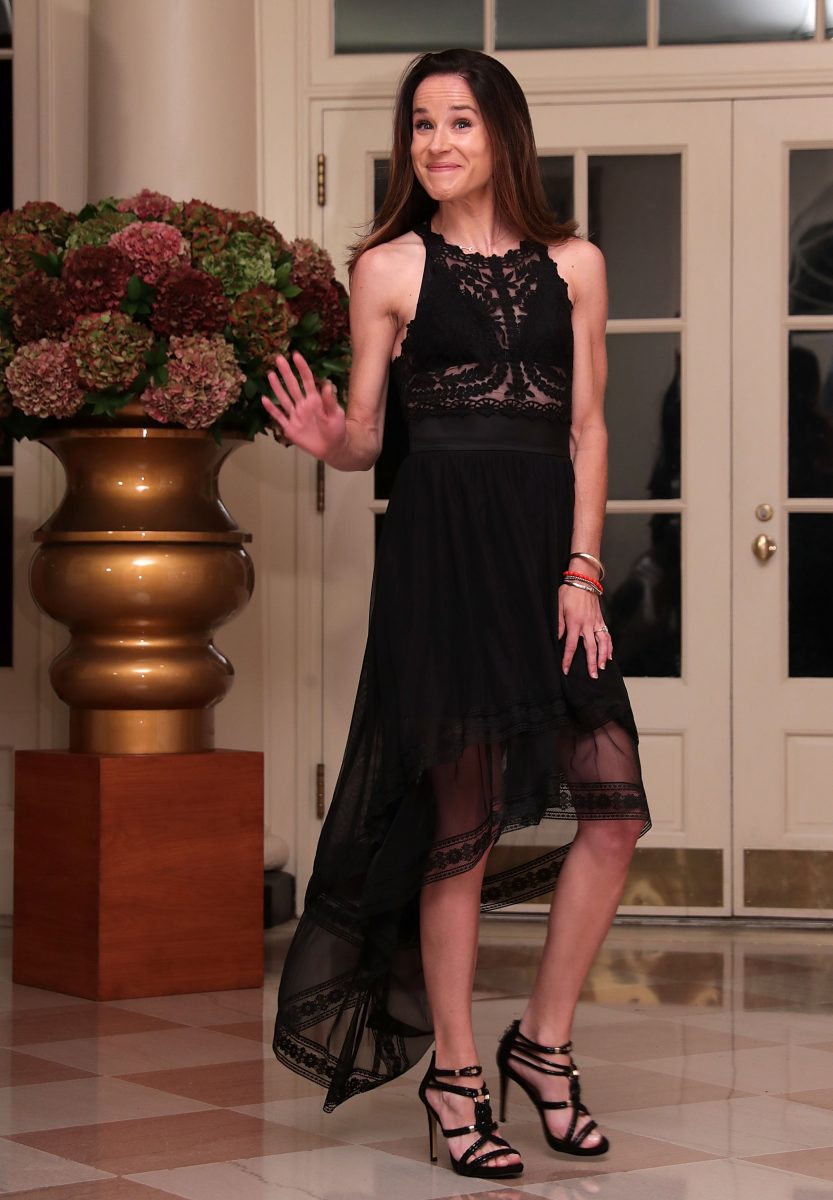 Why hoodies?
I think hoodies are universal. It’s ubiquitous with the labor movement, and it’s the current symbol of the social justice movement. I believe hoodies are worn by everybody regardless of color, race, and age—it’s just a universal piece of clothing. Also, anybody who knows me knows that I love a good hoodie. I am a jeans, t-shirt, and hoodie kind of girl, and I truly couldn’t find a hoodie that was sleek yet really cozy and comfortable and at a good price point. I wanted to design my idea of the perfect hoodie, and that’s what we did.

Has your father gotten his hands on your collection yet?
He has, and he loves it! He has a blue hoodie, which he loves, but he’s not really known for being a sweatshirt kind of guy. We were having dinner the other night and he came down in his blue hoodie and I said, Dad, you look great, but it’s funny that you’re wearing a hoodie? And he said, Man, this is comfortable. So he actually really likes it!

How do you describe your dad’s personal style?
Whatever my mom tells him to wear! [Laughs] No, he actually has pretty good style. Dad is known for his suits and is usually always wearing one, but he loves a good blazer with a sweater inside and he loves to pop his collar. When we go to Italy, they have tons of them at decent prices. When he’s relaxed he’s in jeans and a button down or a crew neck wool sweater. I think he gets a lot of style tips from my mother. 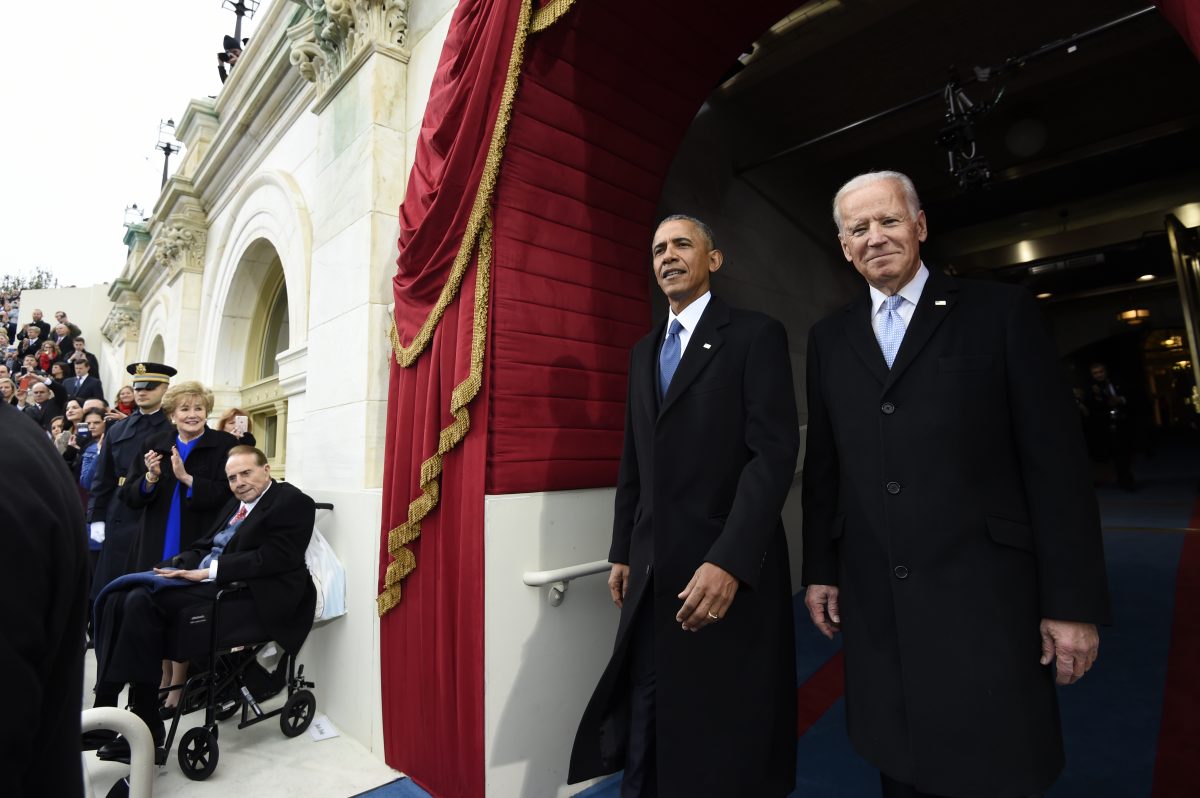 What’s the best piece of advice he’s given you throughout your career?
That it doesn’t matter who gets credit for it as long as it gets done. That one was the best. The other one was, Don’t question someone’s motive, question their judgement.

Is your dad ready for the rock-star treatment in this new phase of his life?
He’s been a rock star his whole life! But his focus isn’t to be a celebrity—Dad’s focused on truly making a positive impact on the world, so he will continue with The Biden Foundation and The Cancer Moonshot. 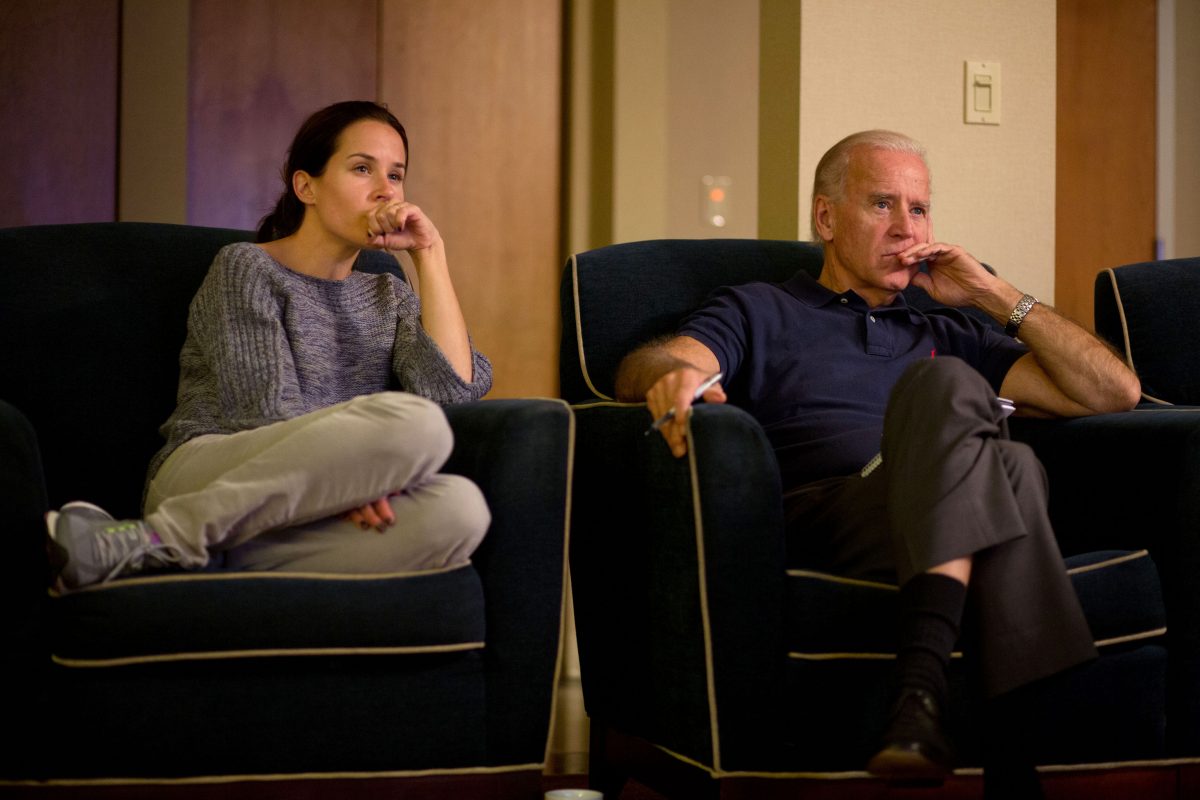 When did you become interested in fashion?
I was interested in fashion my whole life. I’ve never been one to follow fashion trends per se; I just like to wear things that make me feel comfortable and good. It’s kind of a joke that when I was little everybody told me that I was the best-dressed little kid. I always had a dress on with, like, blue Nike’s.

Who are your style icons?
Kate Moss is up there for me. She has a kind of a laid back, edgy yet comfortable look. She never looks uncomfortable in what she’s wearing. I love accessorizing. I have a lot of interesting, antique pieces of jewelry from vintage jewelry shops.

What are your favorite things to do in your neighborhood?
I love to hike, I love to antique shop, I love movies, and I love art, so any art show or exhibits. I write a lot and I’m constantly creating new ideas and coming up with new kinds of projects. My brain is constantly at work. I feel like I am a very creative person and a problem-solver. Spending time with my family is my favorite.

What’s a fun fact about you?
I really love blazers, and my full name is Ashley Blazer Biden, which is a coincidence. Blazers with sweaters look sleek for work, but you can also wear it with jeans and boots. 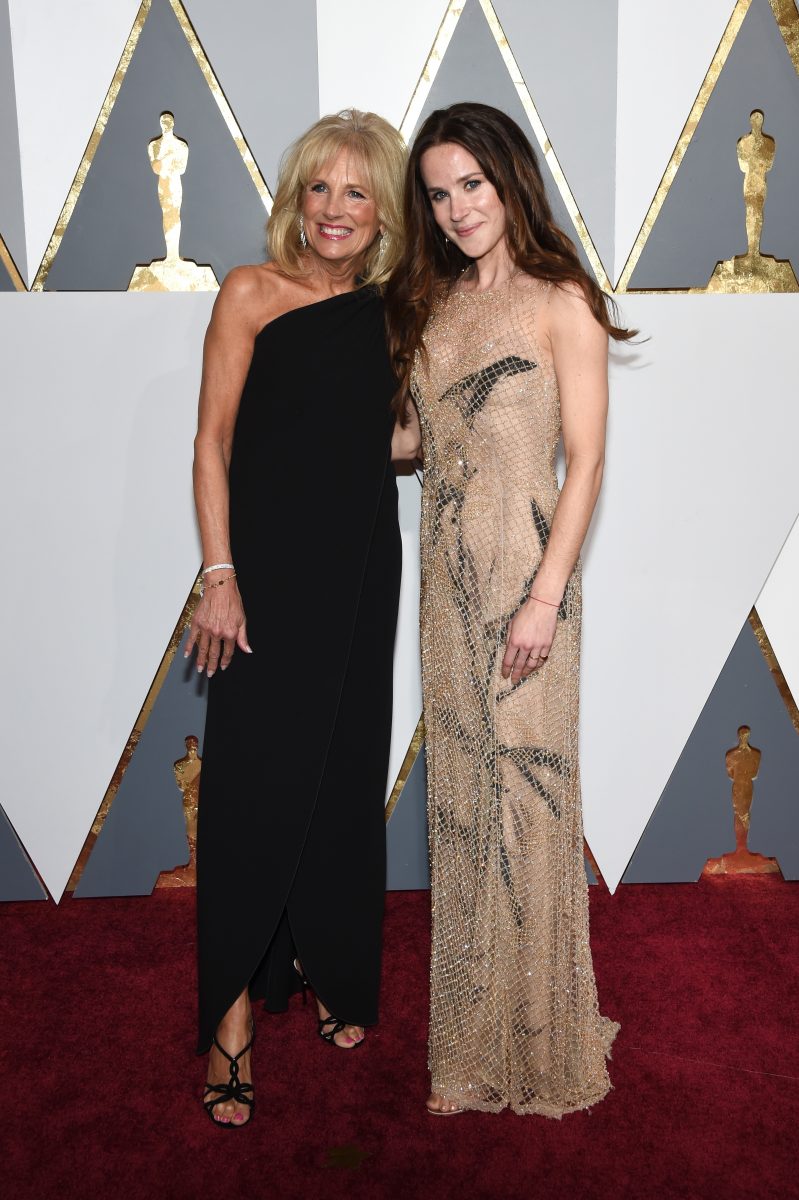 How do you see Livelihood expanding in the future?
We’re currently focusing on the success of the initial collection, and following the launch we are going to review opportunities for future collections. Obviously I would like to expand—I think we’re kind of testing it out and seeing how the first collection is going to do—and then we go from there and hope the sky is the limit.

Gigi Hadid Gets Her Own Barbie Doll, Vetements Is Throwing A Secret Party

The Biden Family are such amazing people. There is a genuine gap in the UNITED STATES now that Joe and Barack are not in THE HOUSE!
So Ashley more power to your elbow as we Brits say, Brava!
It’sI lovely to see your name out there not because it is for fame and fortune but it is in your blood, you care! By the way I became an American Citizen just so I could vote and work for Hillary! Boo Hoo!