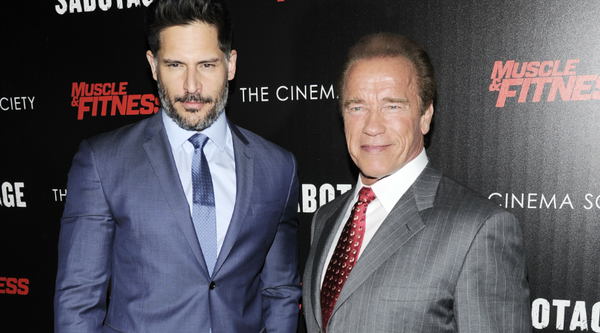 (NEW YORK) The premiere of the exhilarating flick Sabotage heated up Lincoln Center’s AMC Loews theatre on Tuesday night. The Cinema Society’s screening was sponsored by Muscle & Fitness, which was a fitting matchup considering the film’s star, Arnold Schwarzenegger, knows a thing or two about muscle and fitness. “I always work out, but I think that we had to do much more intense training for this film,” Schwarzenegger told The Daily. “It is always important to be in shape so you don’t have to start from scratch [on every movie].”

The Governator walked the red carpet hand-in-hand with his daughter, Christina Schwarzenegger, who stole the spotlight from her father in an all black ensemble including black fitted leggings, a leather jacket, and biker boots, which she finished off with a polished red lip. Also joining Schwarzenegger at his New York premiere was hunky co-star Joe Manganiello. who confessed that he “grew up with a poster of Arnold and all the other Mr. Olympians on [my] wall.” Manganiello had plenty to gush about when it comes to a childhood hero of sorts:  “Just to be standing next to the guy whose movies I saw every Friday that they came out and that I can quote backwards and forwards, as I am sure many people in the audience can, I knew that I better bring it.”

5 Essentials to Enhance Your Workout Experience