An Intimate Holiday Cocktail With Ann Dexter-Jones and Rupert Sanderson 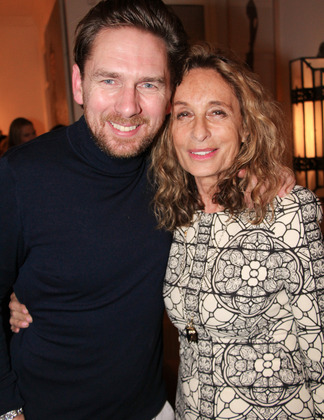 (NEW YORK) There’s nothing like a fête in a warm and well-decorated West Village apartment to usher in the holiday season of cocktails and canapés. And when the hostess is as gracious as Ann Dexter-Jones (who was decked out in Alexander McQueen for the occasion) you know it’s going to be a hard party to top.

Dexter-Jones shared the hosting duties in her cozy abode with the British shoe maven Rupert Sanderson, both of whom offered peeks at their respective designs. While guests fawned over Sanderson’s stiletto collection, they also slipped on chunky pieces of Dexter-Jones’ jewels, perhaps mentally shopping for gifts. As for Sanderson’s choice of footwear for soirees, it’s all about “anything I can mix a cocktail in, so it has to be something secure.” The likes of Selby Drummond, Simon Doonan, Daniella Vitale, Genevieve Jones, and Matches Fashion co-founder Ruth Chapman assembled in the art-smothered apartment. Mark Ronson also made an appearance to support his mom.

Before we begrudging left the warm atmosphere, Dexter-Jones filled us in on her secret to throwing a good party. “I’m picky about the list. I don’t care what you do, you just have to have good energy!”
DENA SILVER

Rashida Jones Opens Up To Glamour About Her Controversial Tweets

Meet Rhode Resort — Masterminds Behind the...

Balenciaga’s Kids Shoes Are Here And They...

Daniella Vitale on the Future of Barneys,...