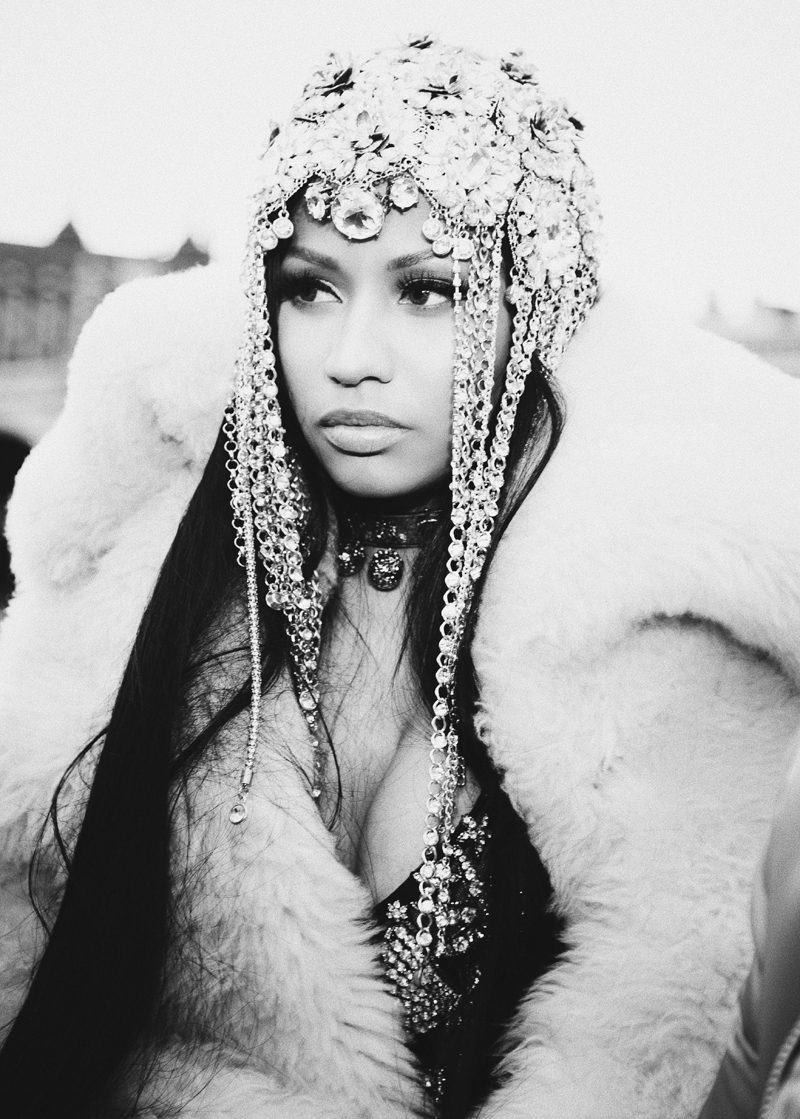 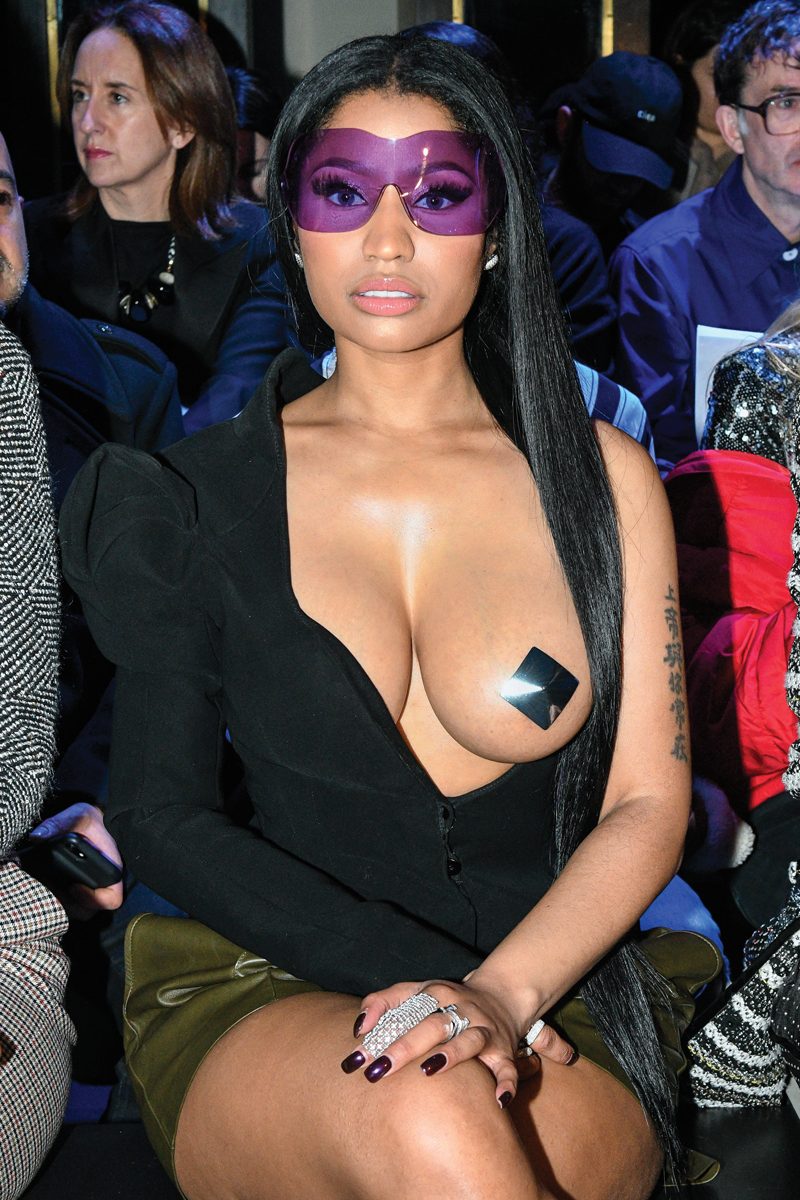 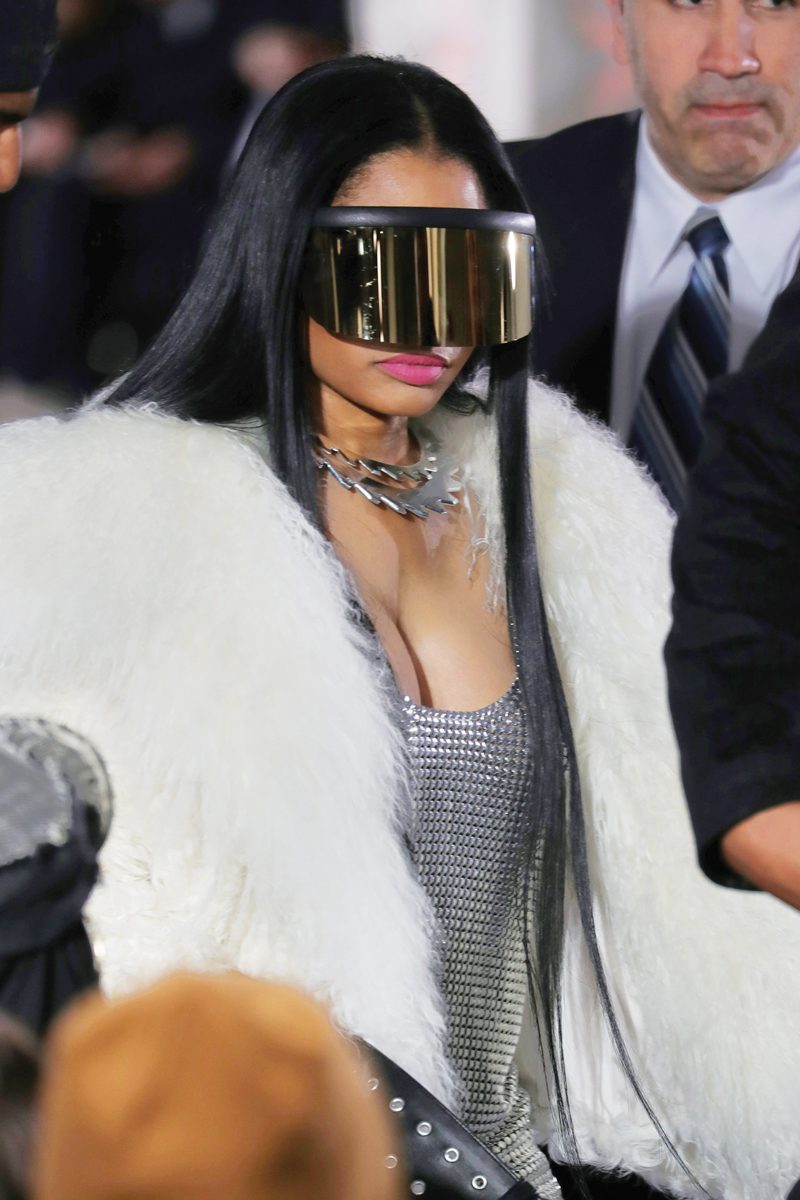 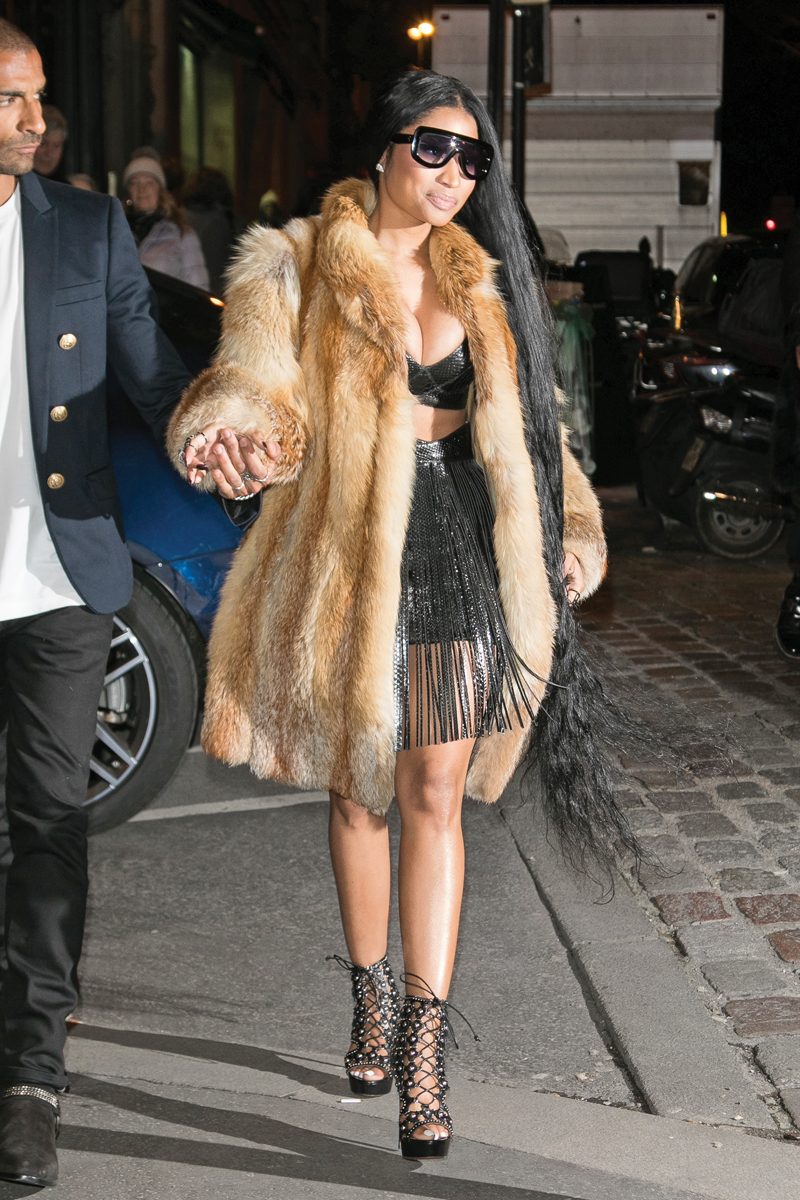 Over the course of her intriguing career, Nicki Minaj has made fashion a key component of her message. One of the biggest stars in the world took a little time out of her busy schedule to call us from London to talk about her new stylist, fashion inspirations, and where she draws the line.

You recently started working with [stylist] Maher Jridi. What direction are you pursing?
When we came together, we didn’t sit down and say we were going to go with a particular style. It just happened to be that he’s very European, and I happened to be in Paris and now London. It’s weird that my style has naturally been becoming more European and more high fashion. I’m more aware of my choices. I didn’t set out to do it that way, but that’s what is organically happening.

What’s your working relationship like?
I’m very, very picky, so it’s always hard to collaborate with stylists. The great thing about Maher is he has a great eye and great ability, but he doesn’t force anything on me. I’ll walk into a room full of looks and he’ll tell me what he loves. Then I’ll try things on and I’ll tell him what I love and what I hate. Ultimately, we get to a place where we are both happy about the look, and that’s it. Sometimes he gives me an idea and we’ll put something together and I’m like, “Oh, my! How in the hell did you do this?” and there are other times where we laugh and I say, “I hate it!” And we figure it out together. This is one of the first times where I have a great friendship with a stylist. It’s very easy to talk to him and everything becomes seamless and smooth.

Does he ever have to twist your arm to try something on?
He’s had to convince me to try things! If I have to be convinced too hard, that means it’s not me and I don’t wear it. The other day he put together a head-to-toe Balenciaga number for the airport…and it was purple! [Laughs] I said, “You know what…I love you to death. I love that you are excited, but no! I want to be a little more understated today!”

What did you end up wearing to the airport?
A black Versus top! It was fleek, but it was still dope with a really big coat. That was the vibe I was feeling that day.

What turns you off?
Even if I see it on the rack and hate it, I have a whole glam team, and we all do this together. Sometimes, they’ll come in and be very excited, so if everyone is excited about something, I’ll try it. We did latex for a couple of days in a row recently, and I said, “Hey! Stay away from latex! Give me a breather to breathe!”

I’ve never worn latex in my life, so I admire you for even going there. How do you and Maher put everything together?
I usually have a [hotel] room just for clothes. We’ll have so many racks of clothes and shoes, accessories, shades, headpieces, all of that stuff. They’ll set up and usually I don’t like anybody to be there when I first go in, because I don’t like my choices to be swayed. I look through things and say, “I love these!” and he’ll help me put it on and say, “This is one of my favorites. Can you try this on?” and we’ll go back and forth. There are times that he may think something will look great, and what I love about him is that if it doesn’t, he’ll say we can do something better. I love that he pushes me and I push him. I also don’t like to wear things based on the designer. I like to pick out things and then find out who designed them. A prime example was yesterday there were these insane boots, just freakin’ dope. I said, “I have to wear these! These are epic! I need these! I want to own them! You can’t take them back!” and he said, “You know those are Alexander McQueen!” and I nearly passed out because Alexander McQueen was like my favorite human who ever roamed the earth. I never got a chance to meet him, but I’m so obsessed with everything he’s ever done. 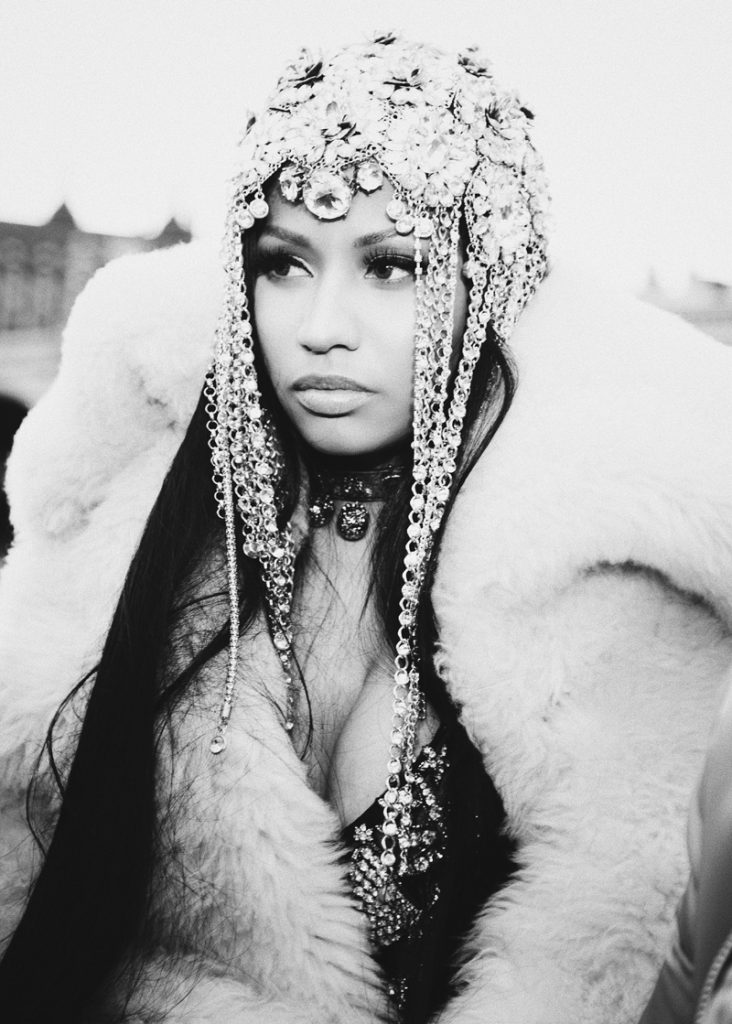 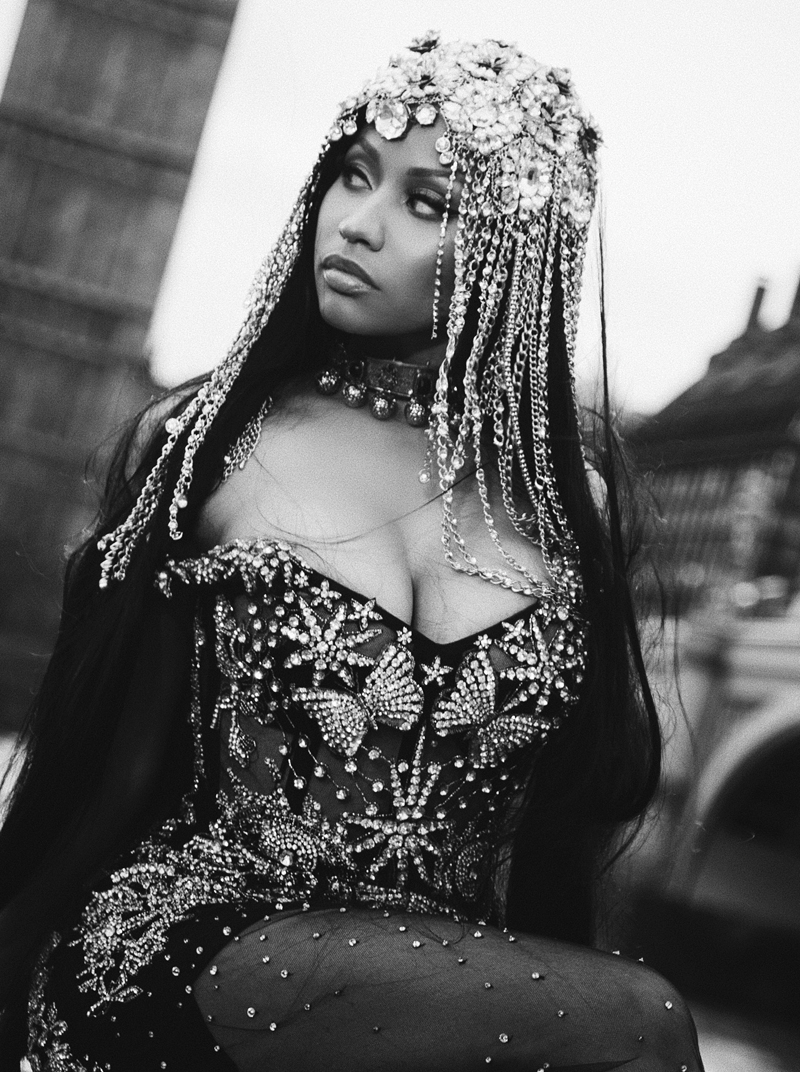 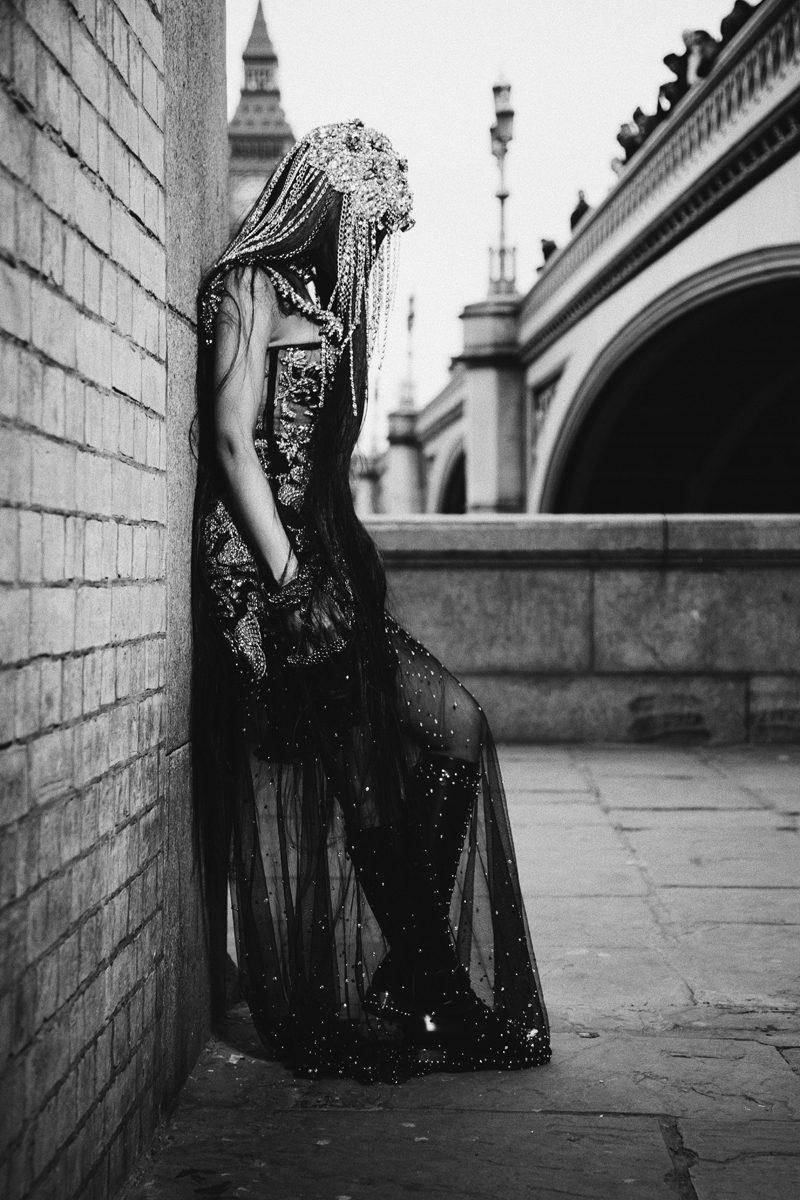 How has your style evolved over the years?
When I first came out, I think I was fun and confident, and I’ll never change that. It was a very colorful moment. Now it’s still fun and still confident, but it’s a little more understated, which makes it even doper. I’m also at peace with myself and how I look in the clothes. I realize now that I’m not going to look like a model on the catwalk, and that’s fine. I don’t have to. I love where I am. I’m going to support the girls who are on the catwalk, because guess what, they support me. It’s not about not liking them because of the way they look. They are drop-dead gorgeous. I’m obsessed with how Jourdan Dunn and Bella Hadid look! They in turn show me the same kind of support. I’m more at a place where I say, Hey, look! I actually love all things fashion, but I am a little bit different. I’m going to represent a different girl and that’s okay. I’m not the anti-anybody. I’m just the Nicki Minaj. I just want to continue to grow and continue to cause fashion folk to expect the pasty on the C-cup titty and not just the pasty on the A-cup titty or not just a nipple showing out when you don’t have a big boob. Boobs are pretty. Who gives a s**t?

Where do you learn about fashion?
Instagram is such a great resource. When you’re moving around, I might not get every magazine. But I live for the Instagram posts that my favorite fashion editor is posting or my favorite designer is posting. The other thing is street style! When I first started doing music, I went to Tokyo and I was blown away by Tokyo and Harajuku culture. There was a designer, Shojono Tomo, who I was using at that time, and it was very Harajuku and I was all about it.

Who do you follow on Instagram?
Edward Enninful. Oh, my God. He does such a great freaking job at posting things that catch my eye. His last Instagram post [was an image] from W magazine’s April issue. It was the first thing that I saw when I woke up and I was immediately so inspired by that one picture. That one picture just took me somewhere. I like following people like him. Anyone who’s in the game and behind the scenes. I follow Alison Edmond. I love the things that she posts. Very different—more beauty stuff—but I always seem to like them.

Let’s talk about your recent trip to Paris. The New York Times said you were the talk of Fashion Week. Did you know when you walked out the door that people were going to react to the Agent Provocateur pastie?
All I was thinking was how pretty my boob looked. I was praying the whole way that the pastie would stay where it needed to stay. I loved the look, and I loved the ambiance of being in Paris. I was just excited.

Did you read anything about it afterward?
No. My glam team read some stuff. People were either “What the…?” or “Oh, my God, I love it!” That’s what it needs to be for fashion. People either love it or hate it. I never want to be in between.

We saw you met [Karl Lagerfeld’s godson] Hudson Kroenig.
I fell madly in love with him! He’s not only such a cute little boy, but he’s so smart and respectful and sweet. And stylish! And funny! He really is going to be something major!

You recently signed with Wilhelmina Models. Why did you go with them?
They seem to be the most genuine. It’s obvious they are pioneers, but they are the most genuine. When I met [Wilhelmina CEO] Bill [Wackermann], I felt like I met my long-lost brother! He got me and he made me feel good about my history. I left that meeting feeling super excited and inspired. I knew having him on my team was going to work wonders, and it really did. I’m super thankful to be a part of the team.

Who are your favorite designer icons?
Karl Lagerfeld; Alexander [McQueen]; I love Riccardo Tisci. Not only because he’s epic in terms of creativity, but I just like him as a person. He’s one of the real ones. Dean and Dan Caten from Dsquared2. I’m obsessed with what Gucci has been doing lately. Obsessed!

Do you consider yourself a fashion rebel?
Of course!

How does it feel to be honored for that?
I don’t really pay that much attention to being honored, but it’s a blessing and I’m happy about it. I’m looking forward to doing a billion times more in 2017. I’m so freaking humbled and grateful. I just want to continue to kick ass in 2017 to prove them right.