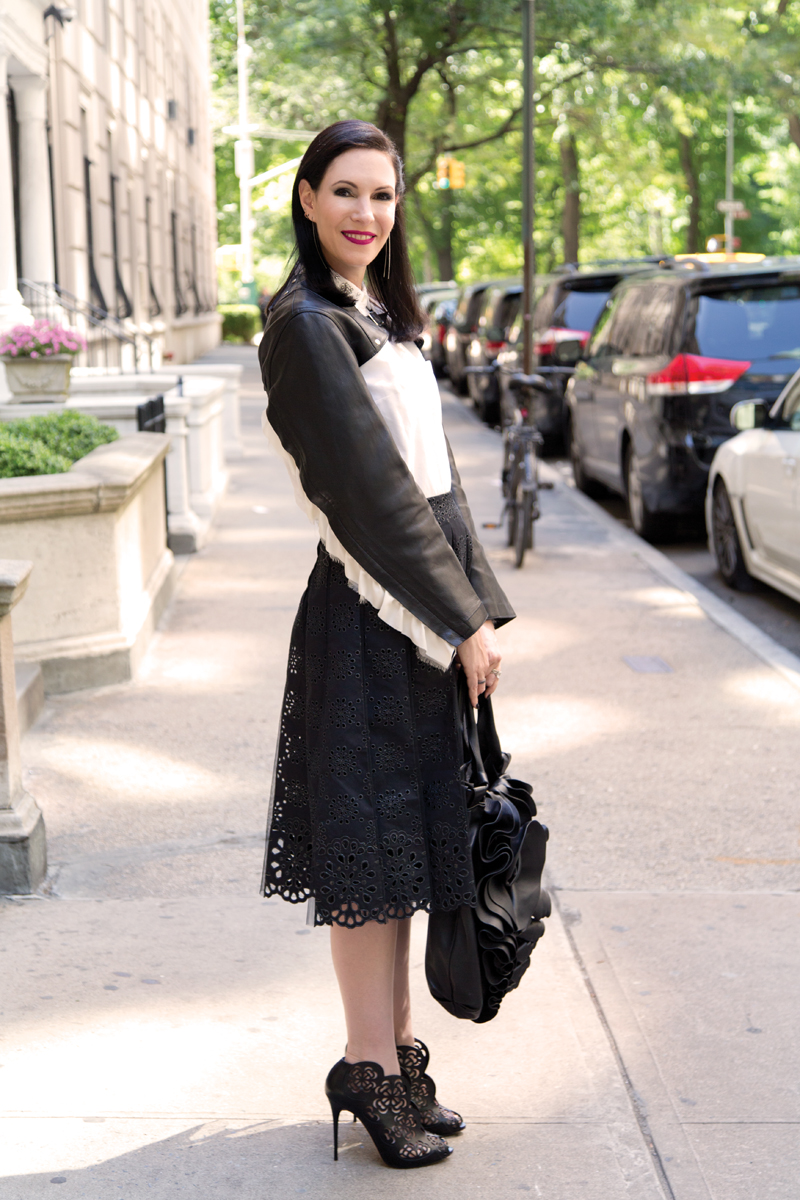 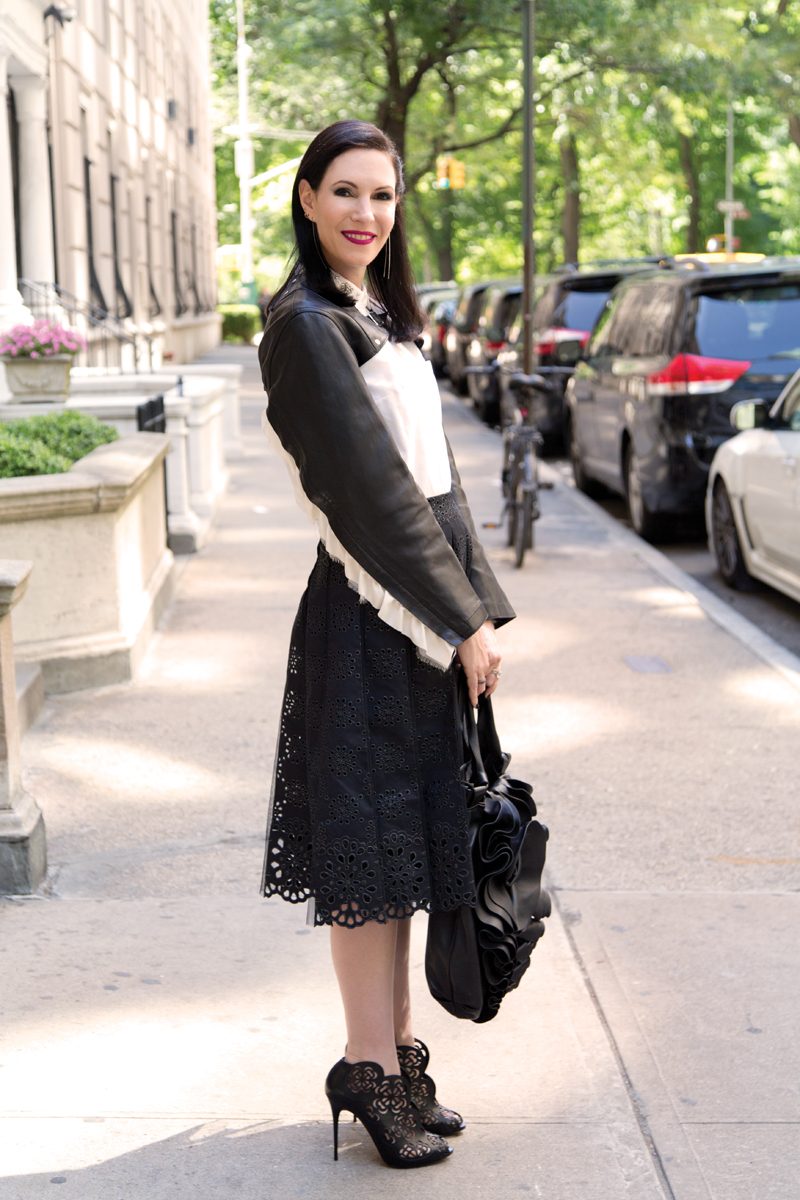 STREET SAVVY Kargman on a pristine stretch of 77th Street on Manhattan’s Upper East Side.

From adored author to internationally known star of Bravo’s Odd Mom Out, Jill Kargman’s journey has always been one hell of a ride. Over lunch at Sant Ambroeus on—where else?—Manhattan’s Upper East Side, Kargman gives The Daily Summer some insight into her wild world. PHOTOGRAPHY BY CAROLINE FISS

How did you go from being an author to a television star?
Before the show, I published a book of fiction, and when it came out, it did well, but it didn’t do as well as my essays. So I said, “Okay, I’m done with fiction. Now I want to do another essay collection!” My editor said no—they were more interested in my fiction. And I was like, “My fiction is bad!” Once you taste being real, you don’t want to go back to fake. It has to be clawing its way out of you, and [fiction] wasn’t. So I was crushed, and trying to figure out what my next move was. I did a lot of copywriting through the years when I was newly married and trying to make money. I also did commercials, which are good money, s**t experience. I was writing maxi-pad commercials—if I’m going to be a whore, I’d rather be a secret whore than put my name on something that sucks. I was doing that for, like, nine months, and it was really because of that gig that this even started, because they got me the meeting with Andy Cohen. The randomist thing!

Was that always a given that you would act on the show?
Yeah, because they wanted reality—me on camera just being myself and whatever. I was not prepared to do that. But from the beginning, they were saying the “Larry David of the Upper East Side” phrase, and I was very flattered by that, because I worship him. They were like, “There is no Odd Mom Out without you in it.” But my husband? There is no way that he’d ever do it. For me, it’s acting, but it’s not Shakespeare. It’s still a challenge!

How involved were you in the casting process?
So I thought I would like auditions. I was so wrong. It was so depressing. After the first day, I said to Julie [Rottenberg, co-showrunner and executive producer], “You guys do this.” I had, like, diarrhea for the people. You know what I mean? I could see they were nervous, and that made me so uncomfortable. So they did the whole audition process without me, and they showed me their top choices, and I went to the callbacks. We auditioned for each of the major roles, except for Joanna Cassidy. We just offered her the part [of Candace Von Weber, who plays Kargman’s character’s mother-in-law], and she accepted. The network flew me to L.A. for the day—I left New York at 7 a.m. and took the 11:59 JetBlue home. It was crazy, but this is how f**ked up motherhood is—I found it weirdly relaxing.

What were some of the most important reviews for the show?
I was so ecstatic when Time magazine said our little rinky-dink show was one of the top 10 of 2015, which was really a shock because there were a lot of good shows. Mad Men, Game of Thrones…should I even be on that page with them?

Have you been surprised by how passionately guys love Odd Mom Out?
People who come up to me on the street are always gay men and then women. Then little by little, a couple of straight guys have been like, “I know I’m not your demographic, but my wife had it on…” I think they like a keyhole into their wife’s life. The wives find it vindicating, because they are like, “You see what I put up with? It’s not just me!”

How has being an actress on a hit TV show changed your life?
It hasn’t at all. I mean I get to get my hair and makeup done and to have lunch with you and that’s about it. I’m 42. I am who I am. I have my friends, my three kids, and my husband. I can’t get f**ked up. I just don’t care!

Are you being offered all sorts of weird side gigs?
Yes. I say no to everyone. I don’t need to do s**t to be more famous. I see with Drew [Barrymore, Kargman’s ex-sister-in-law] what that level of exposure is. It’s very challenging. I don’t know what my ambition is, other than keeping the show and writing what I want to write. I am so into this. People are like, “What’s next?” Nothing!

Drew is one of your many guest stars this season.
She was so good! We have the best guest stars this year—Amy Sedaris, Blythe Danner, Molly Ringwald. Drew was so much fun ’cause our family has such chemistry. Basically, there’s this snowstorm everyone is s**tting ice cubes over. The whole time, I’m like, “It’s going to be like the last one, where nothing happens.” And it turns out to be like Jonas. We’re f**ked. We went door-to-door in our building to get a bottle of wine from someone, and Drew plays one of the neighbors we get s**tfaced with. Essentially, it’s an homage to The Hangover.

How many ideas are you percolating for Season 3 at this point?
Three hundred. The question I get asked the most is, “Aren’t you ever scared you’re going to harvest everything on the Upper East Side?” Nope! There’s always some new restaurant you can’t get into ’cause they have no phone number. I handed in one scene to Lara Spotts [SVP of development at Bravo], and she was like, “This is genius!” I said, “I didn’t write it. These moms really did attack me for not seeing Hamilton.” They were like, “What is wrong with you? I’ve seen it six times. My housekeeper has seen it twice!”

How old are they now?
Thirteen, 10, and 8. They love it. And what’s really rare is that their friends like it. My daughter Sadie is a teenager and has more freedom, and her friends are watching it. It’s the cutest thing.

Have you always been this fearless?
Yes, but age has helped me. Until I was 28, I felt very fearless. But no matter how much “f**k you” you have in you, you are raw when you have a baby. You are so vulnerable because you have this person going out into this scary world. Until I was 33, I was an emotional wreck. But then I got my balls back.

What’s your mother like?
My mom is like my sister, because she’s 22 years older than me. She always said we raised each other and we grew up together. She’s the most amazing mother of anyone that I’ve ever known. I am not a traditional wife. I’m good at the nighttime story stuff. My mother did everything by herself, and I mean everything. We had no nanny. She did not want someone in our house. We had au pairs to help sometimes, when she had obligations, but I have such clear memories of her in a couture gown with oven mitts pulling the lamb chops out of the oven and cutting them with a knife and fork. She’s the most unpretentious, un-diva, down-to-earth person. She was raised Jewish Orthodox. She’s French and she just has the best values. I am so much lazier than she is. I would never sit and prepare a meal for three days. She does that all the time. She’s the dream homemaker. She funnels so much into the children, and I respect that so much because I wouldn’t be who I am without her.

What’s your dad like?
My dad was a stand-up comedian! His father was a very serious cerebral Harvard Law type. He was actually the youngest judge in the history of Massachusetts—27! My dad was like, I think I want to quit business school and be a stand-up comedian. His dad basically read him the riot act. My dad went the safe route. When he was working in advertising, he became best friends with the owners of Chanel, who hired him away. People want him around, because they know you have to be smart to be that funny. He’s also one of my biggest cheerleaders—so supportive.

What’s the most embarrassing thing you’ve ever done to your kids?
I like to think I’m not embarrassing, but I burst into song in the middle of the street all the time. I have Tourette’s syndrome with musicals. Sadie s**ts, and I’ll still do it all the time. But deep down she likes it.

What’s your best parenting advice?
I preserve their innocence, but I’m really honest with them with the bad s**t that happens. I don’t sugarcoat anything, and I feel like I’ve always treated them like adults. At least with my kids, they feel more safe. They can smell bulls**t. When I was growing up, my parents told me everything. I grew up in New York in the ’70s! There was some bad s**t here, and I knew about all of it. I felt like, Okay, knowledge is power. I was a fully formed person by 14. I had so much reality.