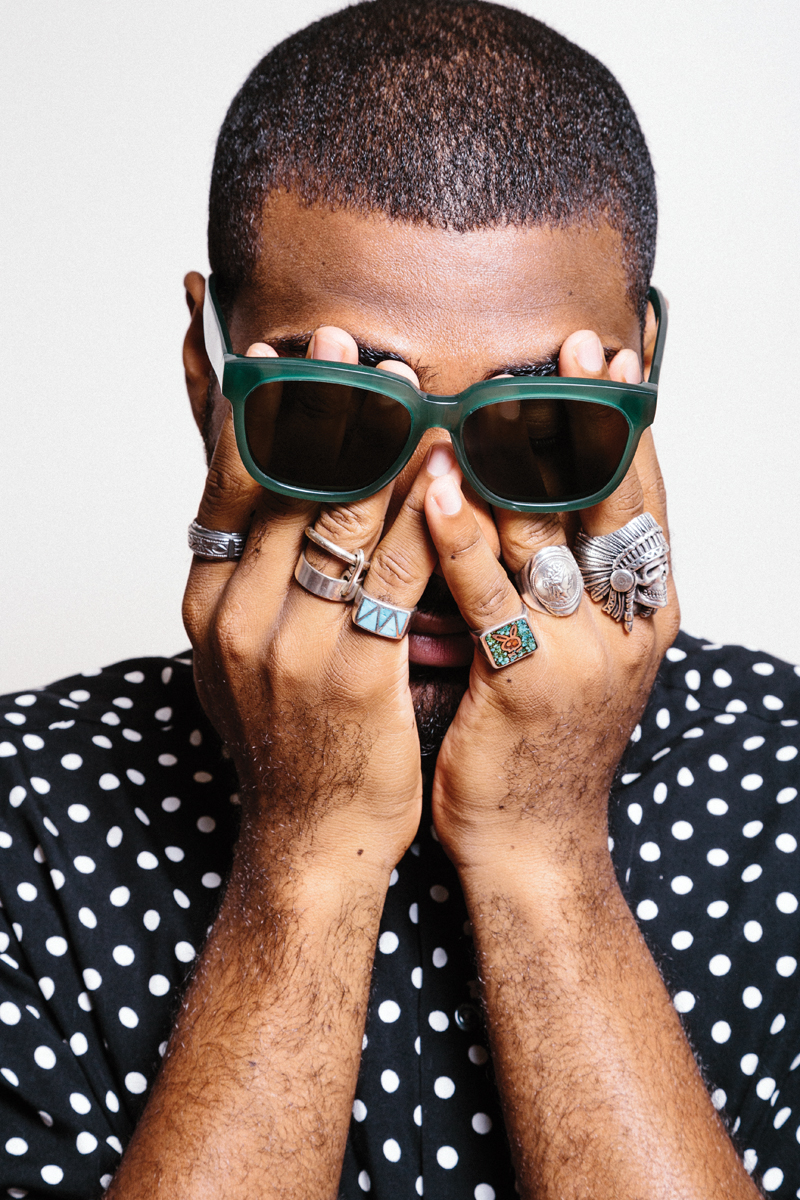 From living legends to emerging stars, the artists who descend on Art Basel Miami Beach have one thing in common—the desire to unveil their latest, greatest “big idea” to a global audience. As GQ’s Style Guy, Mark Anthony Green spends much of his days fully immersed in the world of high fashion. But he’s equally turned on by his after-hours occupation as a fine artist. Meet the friendliest provocateur you’ll hang with all week.

Have you always been a fashion guy?
Yeah. I was super weird as a kid, but I always cared way too much about what I was wearing. When my mother took me to the Salvation Army, it changed my life—I could buy a suit for $4.

You do a lot of different kinds of work for the magazine—Style Guy, profile writing—what’s your favorite kind of thing to do?
I don’t know. This is why the art thing has been so important to me. There’s like a little kid inside of me. There’s no consistent way to pacify a child: Some days, the pacifier works, and then sometimes it doesn’t. Sometimes I’m completely satisfied writing about fashion and clothes, because it’s exactly what I love, and sometimes there are other things I want to talk about. It’s been great at GQ, because I work with empowering editors, and they’re like, “You want to write an essay about your relationship with food? Let’s put you with Daniel Boulud.” I couldn’t work for a place that puts me in a corner.

Have you always been making art?
For the most part. I never showed it, and I damn sure wasn’t selling it. I grew up in a big basketball household, so when I wasn’t playing basketball, I’d go and make a bow and arrow out of hangers. Some days, I was learning how to sew. I’ve always tinkered with things, and I always wanted them to look a certain way. A couple years ago, when I kind of started to feel fidgety, I had this idea. [GQ Style editor] Will Welch was getting married, and I was freaking about a wedding gift. Will had a ratty little Post-it note that said “luminous beings,” and I asked him about it one day. It meant something to Will and his wife, Heidi, so I wanted to re-create it. It needed to be simple, but something you stare at for a long time. I thought, “Why don’t you play with texture, and make it three-dimensional, but all one color?” I’ve gotten a lot better since that first piece. It was a raw deal—Will got the s**ttiest one, in theory.

What was your first solo show like?
It was at Dame Dash’s [now-closed] gallery on the Lower East Side. I was afraid to invite people, so I did it on my birthday. No one knew that all of Dipset was going to show up. People just came because I asked them to, and I’ve never taken that for granted.

What did you do at Art Basel last year?
Can I say one thing and then do that? At GQ and with the art, I only work with people that I actually love. On the art side, my brother, Warren [Chancellor], does everything—he’s the business mind behind it, he does the logistics. And we work with an amazing team—those guys at Team Epiphany, and Coltrane Curtis, are creative ninjas, and we would be lost without them. For last year’s Art Basel, I woke up one day and told Warren I wanted to take over a hotel. He started laughing at me—in a good way. The Dream in South Beach was super kind and let us do whatever we wanted to do. We could have changed the name of it, if we wanted to. We had art in the lobby, and we did a thing with hay bales and these arrows I paint.

What’s the backstory with the arrows?
Sebastian was this cool-ass saint who was killed by arrows, and my favorite magazine cover of all time is Muhammad Ali on the cover of Esquire. I always felt like, as a black man in America, you’re a weird kind of target. On one hand, you could be the coolest person on the planet—your culture, your music, the way you dress, talk, look, and smell, your hair texture, everything—is imitated, and that’s cool. But it could also be super threatening to certain people. To me, it’s not just a bullet, it’s not just an arrow, it’s a beautiful bullet, or a beautiful arrow.

What are you doing this year?
On Friday, we’re having a rager with YesJulz at a warehouse in Wynwood. I’ll be doing an interactive installation where people can contribute to a mural. I’m showing my new film, Fair Use, at my exhibition at Bungalow 1 in the W Hotel on Saturday and Sunday. It’s also up on my website, markanthonygreen.com. Gucci Mane and I are doing a limited-edition print, and he’s doing rare merch the first day in our ice cream truck—we’re going to hop in the truck periodically and go to the kids and sell them a $1 bomb pop and a super dope rare T-shirt.

So you’re going to be selling bomb pops?
Of course! And remember the one of Michelangelo, the Ninja Turtle, with bubblegum eyes? The eyes were always mint flavored, and that bothered me—you put mint gum with a cherry or lime popsicle? We’re going to have properly flavored bubblegum eyes in ours. I’m really solving the world’s problems here.