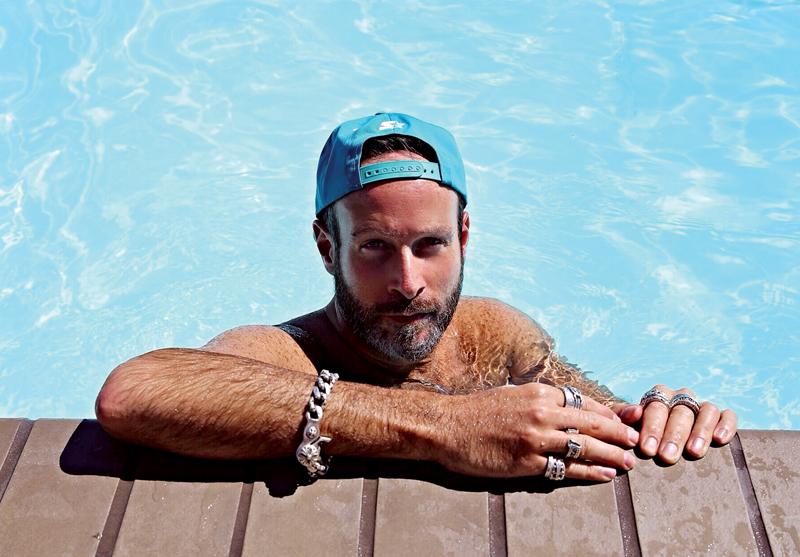 Thierry Lasry has been a pioneer in the realm of chic, ultra-luxe eyewear. When his covetable frames became the obsessions of New York–based editors and buyers passing through Paris, Lasry decided it was time to take himself and the business to the Big Apple—and thus began a coast-to-coast love affair with the States.

What prompted your move to New York?
The U.S. was and is our main market, but it’s very demanding. People want things the next day, or they want to be serviced, so I really needed to be local. And personally, I needed a new challenge. I have way too much energy for Paris, so I moved here in late 2013. I didn’t start over completely, but almost! I had to rebuild everything—the office, the team—but it was really exciting.

Why did you feel New York was better suited to your personality?
I’m a very different person in French and English. I’m open and fun in English, and I’m really the opposite in French. [Laughs] I felt it was time to prioritize the life of fun Thierry as opposed to cold and distant Parisian Thierry. [Laughs] It’s working so far.

Speaking of fun, how did you find your joie de vivre during summers in France as a child?
We went to Tunisia and Morocco, because they are both close to France. They are both great summer destinations, and they are really nice in winter, too. During my teenage years, we went to the South of France, close to Montpellier, for a longer vacation in August. For prolonged weekends, we would go to St. Tropez or Cannes. But I have some family in the United States, so I started coming here and exploring a bit.

Where do you spend your summers these days?
I’ve been spending most of my summers in L.A. for about 10 years now. I have the most friends there, probably more than I have in New York. People always ask me, “Can you really relax there?” I do find a lot of peace there. Artistically, I’ve collaborated with so many people in L.A., like Kelly Wearstler, the tattoo artist Dr. Woo, eyewear designer Garrett Leight…and I have another one coming out in a few months. My personality is a mix of L.A., New York, and Paris—I don’t think I belong to just one city.

Do you drive when you’re in L.A.?
Of course! I pretty much gave up driving when I moved to New York. In Paris, I drove a really fun car that I customized. It kind of looked like the Batmobile—it was a matte gray, but before matte became a thing. It was really special. Now, every time I go to L.A., I rent a Ford Mustang convertible. I love driving on the Pacific Coast Highway.

Where do you stay in L.A.?
At the London in West Hollywood. I’ve been staying there for more than 10 years. I always request the same room. It’s complicated—they can’t really guarantee it, but I have this special room that has a really nice veranda and when you’re right in the middle of the bed, you can see this giant palm tree. I just want to see this big palm tree from the middle of my bed. Sorry, but I can’t tell you the room number. Only one time they didn’t have it available for me!

What are your favorite restaurants in L.A.?
You can eat so well in L.A., and there are always new restaurants. I have a list! I’m obsessed with Matsuhisa—they have this fruit saki sampling; if you go, you really have to try it. I also love Gjelina, Zinqué, Malibu Farm, and Eveleigh. The butterscotch pot de crème with salted caramel at Gjelina is my favorite dessert in the world. In New York, I love Hearth, Fedora, Momoya, I Sodi, and Sant Ambroeus Soho.

Favorite stores?
To be honest, especially since I’ve moved to New York, I’ve slowly stopped shopping in stores. I shop online for almost everything. I also have difficulties controlling myself while shopping, so carrying everything back can be a pain. [Laughs]

Any other escapes?
Miami. I usually leave New York at 7 a.m., and I’m on the beach by 11. I stay at the Miami Beach Edition hotel. We’re working with them, actually—selling inside the hotel. The Miami location is the most peaceful place, and the service is incredible. All the food is from Jean-Georges, even on the beach. I’m totally obsessed. Everyone’s like, “Don’t you want try something else?” [Laughs] I would also like to go to Santa Fe, and I’ve never been to Napa Valley, Aspen, or New Orleans. I’d also like to visit Memphis and Nashville.

Do you get off the beach at all when you’re in Miami?
I have to admit it’s a lot of the beach. I read a lot and really relax. We’re doing a project with The Alchemist, which will come up in the summer so I sometimes mix business with pleasure, which I’m pretty good at doing. [Laughs]

Do you go back to Europe often?
When I moved here, it was complicated, because I was doing a two-year joint venture with Fendi so I had to go to Rome every couple of months and I go to Paris four or five times a year, too. So on top of that, I had to be in Rome three or four times a year. Now I spend about two months all combined in Paris every year.

Do you still keep a place in Paris?
No, I’m done. It was so much maintenance in the end. Mentally, I also decided to move on for a fresh start in New York. I don’t have a single French friend in New York, just Americans. I like to embrace the culture. But when I’m in Paris, I always rent a place in Saint-Germain. I lived in Saint-Germain, we opened a store there…that’s my area, my little bubble.

Where in Paris did you grow up?
In the 15th arrondissement—kind of random, I have to say. I moved to Saint-Germain, and fell in love. I had an apartment that was right across from Le Bon Marché and all my windows were exactly level with the letters of the store’s sign.

Recommendations in Paris?
From Saint-Germain, you can walk to the Louvre, the Jardin des Tuileries, to the Pont des Arts, which is so clichéd, but it’s romantic. It’s great just to walk around and observe people. There are a lot of cute restaurants and places in the city that just opened. There’s one called Marcello on the rue Mabillon, and it’s the best destination for brunch. Paris is really starting to incorporate some of the healthier cuisine that we have here, like avocado toast and all the juices. And there are more and more menus dedicated to brunch. There’s this place called Huguette in Saint-Germain where you feel like you’re in Normandy—it’s really, really cute, and they have a lot of fresh seafood. There is another place called Le Bar des Prés from my friend Cyril Lignac. It’s French-Asian cuisine. It’s sushi, reinterpreted, and it’s really, really good.

Backing up, how did you get into the eyewear business?
My father was an optician, and my mother was a designer. They were the first ones to reintroduce the clip-on sunglass frames in Paris in the ’80s. They were successful, but in the mid-’80s, you didn’t export all over the world. In 2000, I was ready to start working, and I have issues with authority. I was like, “I can reinvent all this! I had been in business school and I had trained to be an optician, so I know everything related to the eyes.”

What was your first step?
In the first couple months, we began rebranding and then slowly redesigning. It went really well for a couple of years, but it was only opticals at the time. In 2004 or 2005, I started to do a few showpieces with Swarovski crystals for our window displays, and somebody told me that I should show them at the Premiere Classe trade show. There were few trade shows in those years, and this one was the most prestigious. But they didn’t really understand why an optician wanted to get into fashion.

Was it successful?
After three seasons, I had met all the U.S. press and buyers, and I was being contacted by various fashion brands and asked to design for them. That’s when I knew it was going to work. I had the right product and I had the access. People were looking for something a little more authentic, so I decided to launch a new line under my own name.

Have you ever been to the Hamptons?
Funnily enough, never. I’m not a big group person, and I feel like the Hamptons can be about big groups. And I’m still new to New York. I’m not at the level of frustration where a lot of New Yorkers feel like, “I need to escape!”

Carla Fendi Passes Away in Rome

Check Out the First Issue of The...

Are You a Summer Icon? Take Our...

Meet the Man Behind the Chicest Ceramics...