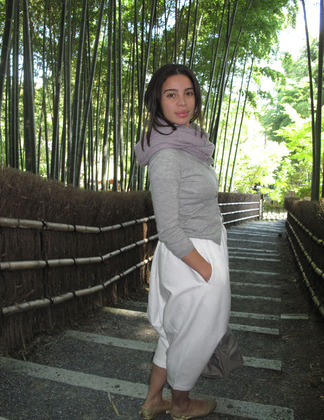 (NEW YORK) With the FGI Rising Star Awards just one day away, it was the perfect time for The Daily to catch up with nominee Tia Cibani, who chatted with us about life après Ports 1961, brand building, and juggling motherhood and the designer grind.
BY PAIGE REDDINGER

Congrats on the nom! What will you do if you win?
I’m honored to be nominated; it’s very flattering! If I win, I’ll put it towards my business: it’d be a big help to me towards this upcoming market season.

Do your formative years in North Africa and your stint in China play into your collections?
They do, subconsciously. I love the kaftans and tunics, interpreted for a modern lifestyle. Having spent so many years in China, I feel like the oriental aspect finds its way through somehow, whether it’s a kimono sleeve or a texture or a fabric. I’m still in touch with my contacts from China, including textile manufacturers, where I source some fabrics.

Are you fluent in Mandarin?
I’m not. I get by! ‘Taxi Chinese.’ It’s a very hard language to learn; I’m able to get around, though.

You spent a decade in China: does that help your business?
Oh God, yeah! It’s a huge, huge help to have been exposed to, and have a comfort level with, that market. It’s intimidating for people that are not that aware of it. Eventually I would like to establish myself here in New York where I feel it’s really my home, but eventually I see myself present there on some level. But you know, baby steps.

What was it like becoming a first-time mother right around the time of your show?
My baby was actually born three weeks early, so that took me by surprise. I was a little disheveled at that time. She was six or eight weeks old when I had the show!

How did you manage it all?
I was in a fog; I was still in baby brain mode. Nothing phased me! I just did what I had to do and if nothing got done I was a little upset, but not to the extent that I would be now. It’s better anyway to be more relaxed and just take things in stride. Things happen organically and I’m not always able to apply that, but at that time it worked out well.

What was the design process like while being pregnant?
It was fun! A lot of fun. I was really inspired. Somehow I was really energetic and able to go all day. The day that my water broke, we were out doing market analysis. It was a really hot June day and we were hitting all the stores. When we got to Saks, I felt really heavy, hot, and uncomfortable. That evening, my water broke.

What was your inspiration for this season?
I looked to Man Ray portraits in black and white; shades of grey with the photogram effect, with Peggy Guggenheim at the center with her arty bohemian lifestyle. Geometrics and the thirties inspired me as well. Also, I love draping and asymmetry; I can’t help myself! I always end up going there.

What’s the biggest potential pre-show crisis that stresses you out?
The shoes not getting here until the day before the show! Last season, we designed our own shoes and worked with someone in Italy who designed them for us. They were just neutral simple styles which I wanted to look like nude feet; this season, I’m collaborating with a friend from London, Julia Lundsten, who has her own line called Finsk. Apparently the shoes are on their way now…

What’s the biggest challenge of starting your own collection?
I think the toughest part is not having the infrastructure or efficiency I had at Ports 1961; that’s been an adjustment. Now I don’t have my own sample room that will bend over backwards and do whatever I need, whenever I need it! I now work with various sample makers and run from here to there. But there’s a beauty in having a small team;  you get to perfect it much more personally.

What is your advice to other young designers?
Start working for someone, take time to learn the ropes and gain the experience to learn the orchestration of it all.  Talent is great and vital, but if you don’t know how to manage all the different components it can be disastrous and overwhelming.

Any interest in doing pint-sized designs for kids?
I did have a kids line called KikoKids for eight years, but I gave it up when I started this project because I realized I couldn’t do it all. I would love to do it again, but as a spinoff to my line rather than its own thing.

Where do you sell?
We have international accounts in Saudia Arabia; customers really appreciated the collection there. We have a couple stores on the west coast like Post 26 and Found Objects. We will have our own online store launching in February.

Who would you most love to dress?
I love Michelle Williams. I would would love to see my designs on Tilda Swinton.

Where Else Would Dita Von Teese Be?