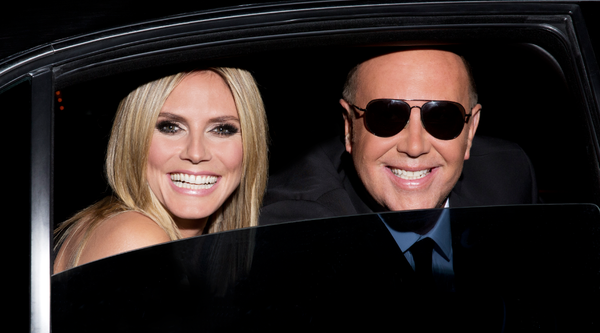 (NEW YORK) It’s a huge week for Heidi Klum, who was honored by amfAR Wednesday night for her work fighting AIDS, and is spending another season at the Tents with Project Runway. How does this mommy-mogul find the time?
BY EDDIE ROCHE

Congratulations on your amfAR award!
I was honored for my work fighting AIDS; I’ve supported them for 13 years. Kenneth Cole called to tell me. We first collaborated with Victoria’s Secret on a big gala in Cannes. I gave a backrub to Kenneth Branagh as part of the auction.

How was that?
It was great! I was like, “OK! Whatever! I’ll do it!” He took his shirt off. Anything for a good cause! I like getting the message out; I’ve been all over the world at their events.

Why is amfAR important to you?
They’re continuously raising millions and millions of dollars to support AIDS research. It’s fantastic.

Janet Jackson was also a recipient. Have you ever seen her in concert?
Never! I saw her brother in concert many years ago, but I’ve never seen her. I’ve had dinner with her many times. It’s amazing to me how soft and sweet her speaking voice is. She speaks so [imitates Janet] very gentle.

Do people typically understand how funny you are?
Usually on Project Runway when I do funny things, they edit it out. They keep my negative criticisms in. I don’t always think that’s fair. I have to go back to the cutting room and say, “Why do you guys always keep the mean things? Why don’t you keep the funny things that make everyone laugh?” I have a good time, though. I run after Michael Kors and throw him on the floor. Why don’t they show any of that stuff? Why do they always show me being harsh on the designers? I’m easygoing. I have fun every day!

How would your friends describe your sense of humor?
Ask them. Hold on. Ask my friend Linda Hay! [Linda hops on the phone.]

Thanks, Linda! [Heidi gets back on phone.] You’re becoming very Martha with all these projects! Is a Heidi Klum mag on the horizon?
I’ve been asked to do a magazine many times, especially in Germany.  I only have so much time in the year. How many children does Martha Stewart have?

Just her one daughter!
I have four kids! I want to spend time with them. We normally shoot super early, so I can be home by 5:00 p.m. to bathe them and read to them. It’s not easy with four kids. I have to think about what I do with every day of the year. Things like a book or a magazine sound interesting and I’m super flattered when these things come my way, but to do a magazine every month and think of all the subjects and look at all the photos…It’s a lot of work! It’s impossible for me to do all these ventures.

Why did you call your new perfume Surprise?
Everyone loves a surprise! Maybe some people don’t. I do. I’ve never had a full surprise party. There’s always someone that spills the beans.

Was it hard coming up with a fourth fragrance title?
No. I have five more names for future fragrances. I have a book where I write thoughts and ideas. I rip things out of magazines from all over the world. I look to see if they are trademarked; I hoard them. [Laughs] It was the same way with Truly Scrumptious. I watched Chitty Chitty Bang Bang so many times and I always thought that would be a great name. I trademarked it and thought someday I’ll use that for something and now I have my line for BabiesRUs.

Would you do an adult clothing line?
I did one many years ago for a huge German catalog, Otto. We had swimsuits, jeans, sweaters…Now I design for A Pea in the Pod and Motherhood. I also design shoes for New Balance. I’ve been working for them for two years. I’m doing performance sneakers that you’d wear with jeans.

You’ll be at the Tents for Project Runway today. How many more decades do you think the show has left?
I’ve always said to Michael [Kors] that they’re going to have to wheel us out in wheelchairs and with breathing tanks when we’re 95. We’re always laughing about that. As long as there’s fashion, we need Project Runway!

Christian Siriano is a definite breakthrough star. Any designers you’ve been surprised to see disappear?
I’m surprised with [the outcome for] every person that wins, but I know how tough this industry is for big-name designers. There are so many designers out there right now. In order to stand out, you really have to have the money to advertise and show at Fashion Week. You need backers to pay for this stuff. Our designers are super talented, but it’s difficult without anybody to pay for things. Or you have to be a great networker, going to events, schmoozing, and getting people to believe in you and invest in your company. That’s why Christian is where he is. He’s been out there hustling and sending clothes to people. He works hard at his shows and moves his booty around.

Any other Project Runway alums who’re hustling well?
It’s the same with Mondo Guerra. He didn’t win, but he’s doing really well. He has a line of socks and glasses, plus clothes. He’s a hustler, too. Sometimes when people win the show, they think the phone is going to start ringing every five minutes.

We Googled you today! A picture of you at Whole Foods popped up. Do you know when a paparazzo’s on you?
Are you kidding? Am I aware? When you have 15 people shooting through the glass into the store, you’re aware! You’re aware of it when you get out of the car and people start shooting. Or when you’re in the vegetable section and people come ask if you know your picture is being taken.

How do you deal?
It’s odd and strange for me. It’s not so strange that they are there, but the people around me get very confused by it. I can block them out, but people start acting weird and they treat me weird.

Do other customers come to your rescue?
I’ve had that happen before. People have spread their arms out in front of them to block the shot and yell at them. These are people I don’t know at all!

Do you ever read Star and Us to see the photos?
Not those two, but I read People sometimes. I don’t read them necessarily because of me. There are certain magazines that tell the truth, and others that love to come up with stories.

Your quotes about sex in Marie Claire got quite a bit of attention. Any regrets?
I have no regrets. I never spoke about me personally. Unfortunately, people haven’t read the whole interview. If they actually read the magazine they’d know I wasn’t talking about my sex life. They were general questions, and I gave general answers. Maybe you can clear that up for me now!

We won’t ask you about your sex life, then. Unless you want to talk about it…
No! I don’t. I didn’t then either.

PLUS! Money Matters, a la Heidi
Do you prefer cash or plastic?
Both. I pay with credit cards, but I like to have cash on me just in case.

How much do you usually keep on you?
A few hundred dollars. I like flea markets.

Are you frugal or spendy?
The only time when I have to have things is when I see beautiful jewelry. If I’m in a country that I won’t get to go anytime soon again, I have to have that. Otherwise, I’m not a huge spender.

Did you have an allowance as a kid?
I had my monthly money that my parents would give me. I’d work for my dad on the weekends. He worked for a perfume company. The testers would have to be put in cardboard holders; I’d do that. He’d give me 50 marks.

That sounds very full circle with you having your own perfume line.
I grew up in the beauty industry! That’s where I interned.