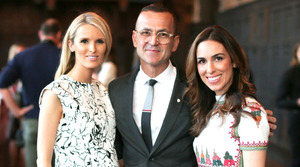 (NEW YORK) The Editorialist hosted a dinner with the CFDA and Hannah Bronfman at the Highline Hotel, the swanky boutique hotel nestled in buildings dating back to 1885, which once served as student housing for the General Theologial Seminary. Editorialist founders Kate Davidson Hudson and Stefania Allen alongside CFDA president Steven Kolb hosted the dinner in a banquet hall, which fortunately still retains its 19th century charms. The dinner was held to fête the Editorialist’s partnership with the CFDA, highlighting the site’s accessory designers on the Editorialist’s e-commerce platform that’s co-branded as the Editorialist x CFDA Accessories Spotlight. The partnership first launched with jewelry designer Melissa Joy Manning last September, and followed with a variety of accessory designers such as Eugenia Kim, Illesteva, Alexis Bittar, Pamela Love, and Monique Péan.

So, who came up with the idea first? “We are so inspired by what Steven [Kolb] has done and what the CFDA brings to the industry and we had this idea to highlight the accessories talent under their umbrella,” said Hudson. “This is an effort to bring more visibility to the accessories talent even if it’s accessories talent in designer’s existing ready-to-wear collections like Tom Ford or Jason Wu, who do have a very viable accessories businesses, to more emerging talents like Sara Beltran of Dezso or Lisa Salzer of Lulu Frost, who’s been around but maybe isn’t getting the visibillity that some of the bigger brands are getting.” The Editorialist also supports designers by buying into their brands. “A lot of these smaller brands are used to working with retailers who only take them on on consignment, whereas we actually buy into the pieces and I think that’s a distinction that we make,” said Hudson. The duo also works with designers to curate a selection that encompasses the brand message. “We’ll work with the designers and pick their marquee pieces whether it’s from archive and past collections or from their new collection. We’ll also work with them on exclusive pieces to create a really well-rounded boutique that we feel is directional and important for them,” said Allen.

Accessories editors like Vogue‘s Rickie de Sole, WSJ‘s David Thielebeule, ELLE‘s Maria Dueñas Jacobs, and Harper’s BAZAAR‘s Amanda Weiner, plus style bloggers like The Manrepeller‘s Leandra Medine and Natalie Joos, showed up to celebrate the collab alongside designers like Jodie Snyder Morel and Danielle Snyder of DANNIJO, Jennifer Fisher, Sara Beltran of Dezso, and Ana Khouri. The latter of which isn’t in the CFDA yet, but the Brazilian jewelry designer has been a press darling and counts A-listers like Madonna among her clients. “Ana [Khouri] is one of our favorites. She’s not a part of the CFDA, but maybe she will be,” said Hudson. “I feel like it’s only a matter of time.” So what does being a part of the CFDA do for these designers? “The CFDA has done so much for us,” said Daniel Silberman of Illesteva. “Every project they do is very far out; I really like how the Editorialist spotlights our products.” What’s more, every designer working with Editorialist through the CFDA is brand new to the e-tailer. Fresh talent to watch!
PAIGE REDDINGER

Cameron Diaz Channels Her Inner Catwoman In The Row