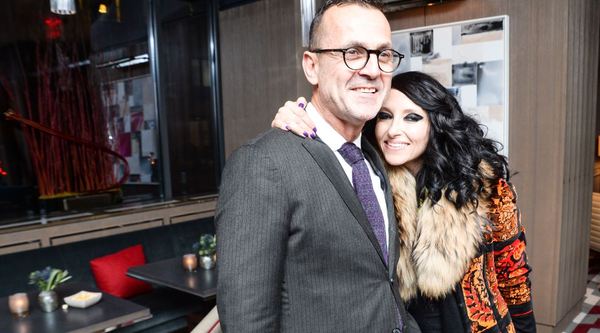 Fashion and football aren’t necessarily the most obvious of pairs, but when the CFDA is involved, designers can get down with the whole pigskin phenomenon. Last night, Bloomingdale’s unveiled 48 designer helmets, which were created in honor of the Super Bowl XLVIII and will be auctioned off to benefit the NFL Foundation. The pieces included a rosebud-adorned version by Betsey Johnson, a serious leather number by Public School, a colorful crystal piece by Alice + Olivia, and a sleek white helmet with bunny ears by Cynthia Rowley. After the window unveiling, party goers flocked to the Loews Regency Hotel to sip on flutes of champagne and rub shoulders with the likes of Steven Kolb, Diane von Furstenberg, Donna Karan, Stacey Bendet, Danielle and Jodie Snyder of Dannijo to celebrate the collab. You know it’s a big deal when even ESPN pens a piece that mentions the CFDA acronym.

Carine Roitfeld And Stephen Gan Team Up For Vionnet