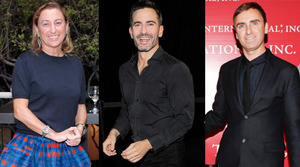 (NEW YORK) Today the British Fashion Awards announced this years nominees for the event taking place on December 2nd at the London Coliseum. Over 300 members of the British Fashion Council will be voting to decide who will take home awards. This year it will be open to the public instead of an industry-only event so snap up your tickets here if you’ll be in London. The BFA’s have also added an International Designer of the Year category to recognize designers who have significant influence around the world. So who’s up for the new category? Just exactly who you would suspect: Marc Jacobs, Miuccia Prada, and Raf Simons.

Burberry, Alexander McQueen, and Victoria Beckham are the nominees for Brand of the Year. The Victoria Beckham label is not surprisingly, also up for the Red Carpet Award alongside Antonino Berardi and Erdem. The Accessory Designer of the Year award will be handed over to either Nicholas Kirkwood, Anya Hindmarch, or Charlotte Olympia. J.W. Anderson, who took home the Emerging Talent Award last year, is up for the New Establishment Award this time around, while Cara Delevingne is up again for Model of the Year. Needless to say, competition is steep. For a full list of nominees click here.

Cami Morrone Is Coming To A Theater...