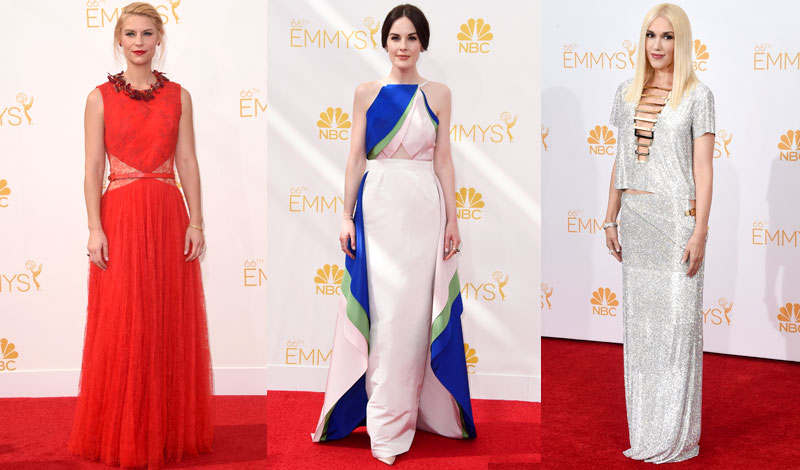 There’s nothing quite like a chic awards show to finish off the summer, right? Last night we got our fix at the Emmy Awards, hosted by first-timer Seth Meyers, who was as smooth and funny as usual. On the actual awards front, Breaking Bad was on a mean winning streak, with Bryan Cranston, Aaron Paul, and Anna Gunn taking home statues. But your Daily was pretty much focused on the red carpet action.

Alors, who wore what? Well, for one thing there was plenty of red to go around. Take January Jones, for example, who opted for a dramatic lipstick red Prabal Gurung gown, while Modern Family‘s Sarah Hyland went with a crop top and skirt combo from Christian Siriano, which was half rouge and half white. Heidi Klum also had her moment with the fiery hue in a Zac Posen dress, finished off with a little cape detail. And how could we not mention Claire Danes of Homeland? The actress stunned in lacy Givenchy, replete with sparkly vine detailing at the neckline. The other popular hue of the night? Silver frocks, from Orange Is The New Black star Taylor Schilling in an embroidered Zuhair Murad halter to Gwen Stefani‘s killer Atelier Versace skirt and shirt combo. Meanwhile, Hayden Panettiere (avec baby bump) glowed in a Lorena Sarbu number.

The surprise red carpet repeat of the eve was Giambattista Valli, who dressed three leading ladies: Lena Dunham, Allison Williams, and Amanda Peet. While Dunham’s Fall 2014 couture Valli getup was bit much, ruffled to the max and gradient pink, Dunham’s Girls costar Williams worked a princess-y vibe thanks to her Spring 2014 couture cream tulle frock. As for young designers, they were present as well, from nominee Michelle Dockery‘s colorful Rosie Assoulin gown to Julie Bowen‘s floral Peter Som number. All in all, a happy fashion eve for all.

Random Alert! The Dallas Cowboys + Hublot = A Match Made In Watch Heaven