Spending In Splendor! 'Scatter My Ashes At Bergdorf's' Debuts 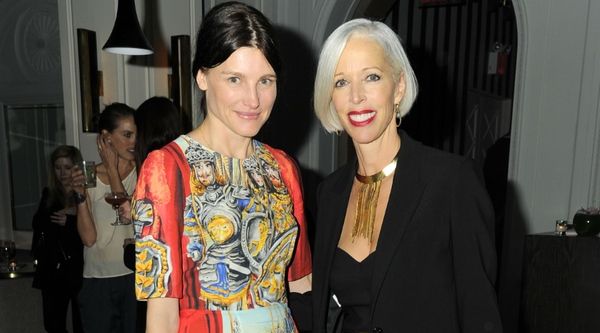 (NEW YORK) Bergdorf Goodman has for 111 years been a Fifth Avenue legend and monument to fashion in New York dressing some of the city and the world’s wealthiest, hence its role as a gateway to success for designers. Last night, The Cinema Society with Swarovski and Grey Goose hosted a screening of Scatter My Ashes At Bergdorf’s, the documentary by Matthew Miele and eONE Entertainment’s documentary. Quick recap: The film chronicles the history of Bergdorf’s, including its inception, its takeover of Vanderbilt-owned prime real estate on an entire Fifth Avenue block, and its current day splendor as a shopping mecca home to the world’s best (and most expensive) designers.

The must-see film first took root in Miele’s mind as a child when he used to come to the city during the holidays to shop and see the window displays with his parents. “Saks, Lord & Taylor and other stores had Santas and reindeers, but Bergdorf’s always had straight fashion,” said Miele, who at one point considered window dressing as a career path. “I wrote a screenplay with a character that was a window dresser. I went to Bergdorf’s to see if I could film a little bit and look at their archives for research: they didn’t have an archive, which blew me away!” It took Miele four months to convince the department store to let him film a documentary and now the film features a top-tier roster of fashion luminaries (including Alber Elbaz, Giorgio Armani, Pat Cleveland, Michael Kors, Oscar de la Renta, and Sylvia Fendi).  How did Miele wrangle such talent? “When Karl Lagerfeld said yes, then everybody said yes,” said Miele. Other industry talents with cameos in the film who showed for the screening included  Vera Wang, Reed Krakoff, Alice + Olivia’s Stacey Eisner Bendet, Wes Gordon, and Gilles Mendel, who mingled at Florence Gould Hall to see the film, followed by a bash at Harlow.

In the flick, Kors reminisces with Dawn Mello, the Linda Fargo of her time, about the moment she discovered him dressing a window with his own designs and launched him in Bergdorf’s. A great Kors soundbite from the film: “I didn’t even have a real collection at the time; they were all one-offs!” Of course, a collection quickly materialized; with his company now publicly listed on the stock exchange, the rest is history. The iconic Linda Fargo herself was, of course, a main feature of the doc, which showed her going about her BG duties as she inspects the collections of new designers for consideration. Miele’s biggest surprise? “Linda called me to come film her checking out a new collection, and I thought that the designers [she was checking out] were going to get in the store, for sure. But to my surprise, they didn’t,” he said. Who were the designers? Ally Hilfiger and Nary Manivong, who showed Fargo their now defunct line, Nahm. “It’s authentic, it’s real life, and it’s how the business is,” said Hilfiger, who was present at the screening. “It inspires me to keep going. It was such an honor to be in the film. Linda Fargo’s a wonderful woman.” And indeed, Fargo is lauded by colleagues in the film on various occasions, for her genuine sincerity and kindness. Fargo’s biggest career lesson? “This is so Pollyanna, but I’d say being nice to people and how important it is to genuinely enjoy what you do,” said Fargo. “Enjoy the people and really realize that everyone you’re working with is a person.”

Of course, you can’t make a film about Bergdorf’s without featuring their iconic window dressing. David Hoey, who is described as the P.T. Barnum of Bergdorf’s, is the man behind the elaborate phantasmagoric windows. The film chronicles his creations as he works with artists like Johanna Burke and Brett Day Windham to create the eye-catching installations. “It takes a year to produce them and we usually have several ideas waiting to launch,” said Hoey. “We’re doing Christmas year-round, while we’re doing regular windows on top of that, if you can imagine.” But you can’t possibly imagine until you see it in action…

And how about the people actually making the register ring? Legendary personal stylist, Betty Halbreich,  arrived looking elegant for the occasion in an ivory Chanel skirt suit. The 85-year-old chicette is known for her tough love and top-tier sales. No client is too hard to handle, because as Halbreich puts it, “No one’s tough with me, because I’m tougher than they are.” Sales associates at Bergdorf’s have been known to make up to $500,000 a year; one salesman featured in Scatter My Ashes told of the time he went out of his way after hours on Christmas Eve to sell fur to Yoko Ono and John Lennon. What exactly did they buy? In one evening, Ono purchased a whopping 80 fur coats for friends and family, which in today’s currency would have been roughly $2.5 million. These stories are just the tip of the iceberg for the dazzling doc, which, while anchored in reality is no doubt flowing with fashion fantasy.
PAIGE REDDINGER