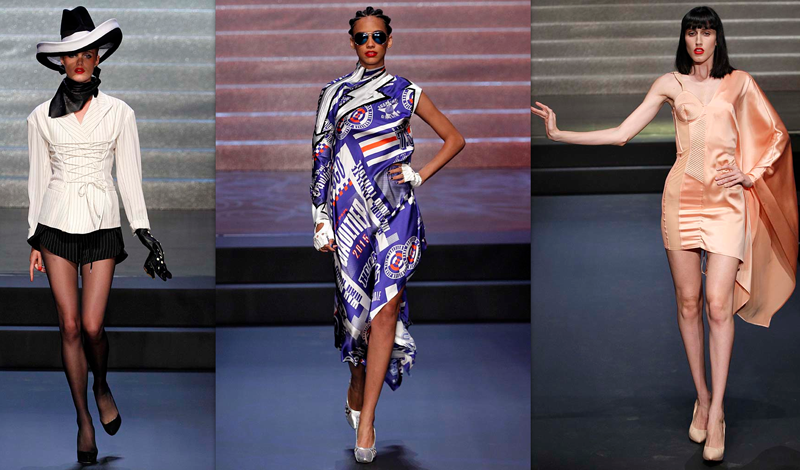 One of fashion’s greats has bid adieu to ready-to-wear: This season marks Jean Paul Gaultier‘s very last show in that realm. He plans to focus on his couture line for the future and carry on with his perfume business. “I think it’s probably true to say that his heart has been more in the couture recently and, of course, his fragrances have been runaway successes, which allows him to really indulge in whatever he wants,” said Vogue‘s Hamish Bowles. The feeling among editors: this is definitely the “end of an era”, so to speak. Gaultier has been known for so many iconic looks throughout his career, perhaps the most recognizable being Madonna’s infamous cone bra worn on her “Blond Ambition” tour. That bra sold in 2012 for $52,000 according to Billboard, by the way. That said, his last ready-to-wear collection was one for the fashion history books.

Hoards of gawkers and onlookers gathered outside the show’s venue, Le Grand Rex, in Paris’ 2nd arrondissement. Though that’s a scene that’s par for the course at Paris Fashion Week, this was certainly the crowd of the season. Inside, popcorn and champagne were served and designers like Rick Owens, Alber Elbaz, Jeremy Scott, and Gareth Pugh showed up to see the master turn out one last collection. It was an Élection de Miss Gaultier: Rossy de Palma channeled Madame de Fontenay, the former judge of the Miss France competition known for her black and white hats and scarves. There were football-inspired dresses and reconstructed jerseys paired with cornrows, and even a section of Mexican wrestling-inspired numbers. We’re not sure many will ever wear the latter, but at least there was a sense of humor. Even funnier? The selection of looks based on the industry’s iconic editors and critics. There was a flame-haired Grace Coddington homage, a Suzy Menkes-like look (complete with signature pouf), and a svelte Carine Roitfeld type. Anna was not present. Going out with a laugh, non?

There were also looks that touted Gautlier’s famous masculine meets feminine aesthetic: part cocktail dress, part tuxedo or moto jacket. Expect collectors to snap those up right away. And finally there was, of course, a tribute to the cone bra, donned by Anna Cleveland and Coco Rocha, in soft pale pink satin. “It’s not so often in our lifetime that we bear witness to this kind of creativity. He’s really a genius,” Linda Fargo told The Daily. “There’s something very bittersweet about the whole thing.” Now that Gaultier ready-to-wear is off the table, the .001 percent might want to start placing their orders for couture tout de suite!