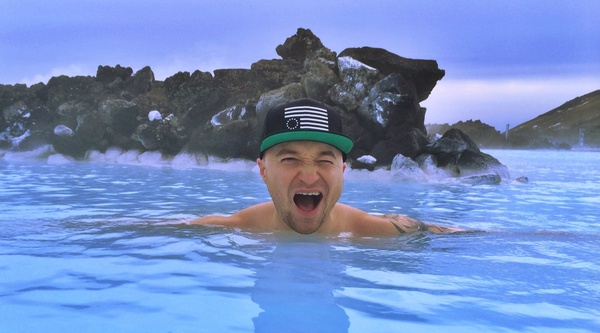 Even Sergio needs a break now and again, so where did the Cosmo VIP go to unwind? This week, in a special pre-NYFW dispatch, Kletnoy took a break from being by Joanna Coles’ side to fill us on his trip of a lifetime. See you at shows, love.

“Some people go through life believing that Disney World is the most magical place on earth; they’ve never been to Iceland, most likely. Ever since I was an adorable Russian child, I had dreams of visiting the Nordic island country, located between the North Atlantic and Arctic oceans. On a whim, my BFF Courtney and I decided to take a 4-day trip to Bjork’s homeland and, to no one’s surprise, had the best time ever.

Here’s what happened when I told THE BOSS (Joanna Coles) about my trip:
Me: I’m off to Iceland for 4 days.
THE BOSS: Oh, well say hello to Bjork when you get there.
Me: Ummm, Bjork has lived in Brooklyn Heights for years.
THE BOSS: Are you sure?
Me: I couldn’t be more sure and even if she did still live in Iceland, I doubt she’s roaming the streets of Reykjavik welcoming visitors into her homeland.

After a five-hour flight, we arrived in Keflavik International Airport, which was built by the U.S. military during World War II and located about an hour away from Iceland’s capital and largest city Reykjavik. We stayed in the middle of everything, at the Centerhotel, located in front of the Prime Minister’s office. It was about 5 degrees, but it didn’t feel as cold as NYC. The mountain air was fresh, clean, and crisp. It also snowed the day before we came and the day we left, so most of Iceland looked like winter wonderland. In the cold months, Iceland usually gets anywhere between three to eight hours of daylight; we had about six. During June and July it’s 24 hours of daylight, so you know I’m going back!

In no particular order, we’ve made pit stops at: Lutheran Cathedral, which gives you 360-degree view of Reykjavik; Parliament lava fields, of which there are apparently only two in the world, with the 2nd one in Africa; Pingvellir national park and Pingvallavatn, the largest natural lake in Iceland; breathtaking landscapes, peaks and valleys covered in lava, one place in particular where an episode of Games Of Thrones was filmed last year; world famous house where back in 1986 during the Reykjavik Summit the Gorbachev/Reagan 1986 meeting took place; Gullfoss, only the most powerful waterfall in Europe; Glacier gray and white rivers as well as mountain rivers with the clearest waters I’ve ever seen; the Icelandic Phallological Museum aka the Penis Museum (Google it!); farm land for miles with beautiful horses and sheep’s roaming without supervision; hot springs that explode from the ground every 10 to 12 minutes; the life-changing Blue Lagoon, where we swam for hours; and after two days of hiding behind clouds, we finally saw saw Aurora Borealis aka the Northern Lights, a sight so stunning it didn’t feel real.

Iceland is truly one of the most beautiful and mystical places on earth. So many of the locals believe in elves and magic and the country even has 13 Santa Claus’ (one for each day starting with Christmas). Most people speak English, so you would never feel lost. At night the sky was so clear that you could see every single star. My BFF was quick to point out her knowledge of constellations, from Orionn’s Belt and Seven Sisters to The Big Dipper. Our tour guide even babysat Bjork when she was 5! At times, we drove for miles and did not see a soul. It really felt like a trip to another planet or the frozen tundra. And a foodie would have a field day trying everything from Icelandic fish soup to whale with mash potatoes. On our final day we discovered a local restaurant called Seabaron, right by the water, and their lobster soup and scallop skewers were to die for. The fish melted in my mouth; I’ve been dreaming about both ever since. When I tweeted my last photo from the Blue Lagoon, THE BOSS retweeted it with a message: “Hurry back, I need you to cancel my appts due to snow”. And just like that, I remembered that Fashion Week is upon us, and my magical time in Iceland is over. It was the best trip I’ve ever taken and I cannot wait to be back… I’m staying radio silent during fashion week, but you can catch me on Twitter at @SergioKletnoy. Check out my fave tunes below!”

“Leave it Alone” by Broken Bells

“Let Her Down Easy” by George Michael

“Into The Blue” by Kylie Minogue

“Can’t Remember To Forget You” by Shakira and Rihanna

Tommy Hilfiger To Launch "InstaMeet" Event During His NYFW Show