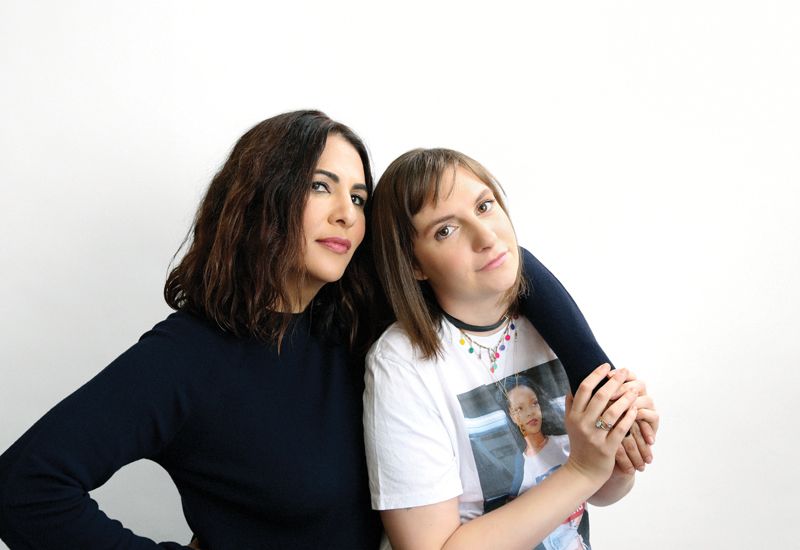 Girls creators and serial collaborators Lena Dunham and Jenni Konner launched Lenny Letter less than two years ago as an intimate home for long reads. The talented duo’s twice-weekly “issues” tackle a breadth of topics through a candid, intelligent, feminist lens. Dunham and Konner explain how personal stories and a commitment to an honest, empowering dialogue have made Lenny a must-read across generations.

How’d you come up with the Lenny Letter concept?
Lena Dunham: It really started to feel very, veryåimportant that we have a platform to talk that was more than 140 characters, and a way to express ourselves that was not as short-form—and often frustrating—as Twitter.
Jenni Konner: …And not as long and fictional as Girls.
Dunham: Exactly. And there were things we couldn’t touch on on Girls, politically and personally. We also wanted to connect with, and expand on, our [Girls] audience.

Why did a newsletter feel like the right format?
Konner: It felt like the right length, and contained. We could pay enough attention and control it.
Dunham: It’s manageable and personal—we enjoyed that people could connect with it outside of the constant “refresh” culture of moving between windows on a computer. We liked that you could take a moment and really absorb it.

Why does the newsletter concept, which has been around for years, resonate in 2017?
Konner: It feels really intimate. A lot of stories, 80–90 percent of them, are focused on personal narratives. When it goes into your in-box it feels special, and like it’s from a friend.
Dunham: Jenni and I talked a lot about how we wanted it to be in the spirit of our friendship. We constantly share personal stuff, advice, and cultural documents. Jenni has always served as the voice of reason to the Girls cast, so we wanted to create that voice for a newsletter: your older, flawed but delightful sister.

How did you want to distinguish Lenny Letter from existing media brands?
Dunham: We wanted feminism and feminist commentary that wasn’t snarky. There’s a reason we don’t have comments, or any place for people to argue with each other.

Ever considered expanding Lenny Letter into a full-fledged site, comments and all?
Konner: I’m always terrified to say never, but this is the closest I’ll come to saying never.
Dunham: Jenni always says that my gravestone will read, “She read the comments.”

Which publications did you want Lenny’s tone and readership to emulate, to a degree?
Dunham: All my references were Sassy meets George—all from, like, 1994, pre-Internet.

Konner: We saw a hole, so there wasn’t a ton to compare it to when we launched. I mean, there were specific essays we loved in other publications, and the political ideals of Teen Vogue, something like that. But we wanted to fill this void.
Dunham: Gwyneth Paltrow has been incredibly generous with us. Jenni and I both love Goop, and Gwyneth has given us a lot of her time and friendship in building Lenny Letter. She said something in an interview about wanting Goop to be so great that people forget she’s involved; I think about that a lot. I’d like people to forget that it came from the creators of Girls.

Why did you want Lenny to have an unapologetically feminist tone?
Dunham: We both self-identify as feminists and were raised as feminists, and feminism is the lifeblood that pumps through Lenny. A lot of T-shirts say today, “Feminism is the radical belief that women are people,” and it’s much more complex and simple than people give it credit for. It informs what we talk about and what we do, just the way feminism informed Girls on a deeper level, even when it wasn’t overt.

How big is the Lenny Letter team currently?
Dunham: People often think there are 15 or 20 people on our team, but we currently have six employees, including us and a CEO. We wanted people who shared our goal, of creating a wealth of personal and political content that makes life feel a little more manageable, but also brought something totally new to our vision. We’re constantly learning from the people we hire.

Has the readership changed since you started Lenny Letter? Any surprise fans?
Dunham: We’re both excited whenever a man tells us he likes something, since we’re so women-focused.

How about unexpected celebrity Lenny loyalists?
Dunham: I got a compliment from Bono; he loves Lenny—it shouldn’t surprise us, because he’s somehow in every country, doing aid while on tour and reading Proust, so, of course, he has time to read everything on the Internet. At first I was like, okay, someone briefed him [on Lenny Letter], but then he referenced a specific article, and I was like, “Well, well, well, Bono!”

How did you get involved with Hearst, and did you have any reservations about working with a huge, corporate publishing company?
Dunham: We really wanted as much reach as we could, that was our dream. Whether it’s connecting with ad or publishing partners, working with big corporations doesn’t scare us because we have confidence in our voice and confidence that these partnerships can bring more to women.

You two have collaborated on many different projects. How is working on Lenny Letter different than, say, Girls?
Konner: Our relationship remains the same, but what’s amazing about Lenny is we really don’t have to micromanage everything. Because of our editors and CEO, it’s incredibly independent. We have a call once a week, but then we can check out and leave them to mind the store.
Dunham: I remember one week when we were working on Girls, I was acting and directing the entire time, and it was just too much, so I decided not to look at the newsletter. It was sent out into the world and I read it at the same time as everybody else, and I was like, “I should do this more often!”

Which particular pieces on Lenny Letter are you proudest of?
Dunham: Jessica Knoll, the author of Luckiest Girl Alive, a great thriller everyone should read, disclosed her experiences as a sexual assault survivor and how it influenced her book [in Lenny Letter]. It’s an incredibly beautiful piece, and The New York Times then profiled her about her experience and what it meant to other survivors. As a sexual assault survivor and a lover of beautiful personal essays, I’m just in awe that we had anything to do with bringing that into the world.
Konner: I loved our Hillary Clinton interview. She showed such a fun playfulness, and she had a really good time doing it.
Dunham: I remember looking at Jenni as we were waiting to meet with Hillary, and I was so scared to go on camera, and I said, “I can’t believe we’re getting to do this together.”

Which contributors are you particularly surprised and excited to have featured?
Dunham: It’s been sort of a surreal list—Jane Fonda, Michelle Obama, Gabourey Sidibe, Alicia Keys, Brie Larson. These amazing women, constantly being so generous with us, is pretty wild.

Who’s on your dream list of future contributors?
Konner: I really want Mary J. Blige. I saw her in concert years ago, and she stopped in the middle of the show to tell women to get their own bank accounts. So I really want her to write about money in the newsletter. That’s a work in progress.
Dunham: If we could get someone into Joni Mitchell’s house to have a conversation, that would be the greatest thing in world. If you want to know what I want for my birthday, Jenni, I would love an invitation to Joni Mitchell’s house.
Konner: I’m already working on your birthday present, and it’s really good.
Dunham: What?! My birthday is really far away, and Jenni always gives great gifts.

Any topics you want Lenny Letter to tackle that haven’t been addressed yet?
Konner: We’re open to everything.
Dunham: We want it to be a full dictionary of experience of what it’s like to be a female-identifying person—that’s why we love historical pieces, fiction pieces, personal pieces, because it’s going to become this awesome encyclopedia of voices.

Have you toyed with the idea of compiling Lenny Letter’s greatest hits into a book?
Konner: Maybe! That’s a good idea.
Dunham: That is. We have our book imprint with Random House, and we just published our first book, Sour Heart, by Jenny Zhang. We have a few books in the works, and some that we’re chasing now. To us, it’s almost like a Lenny Letter library.

How did the idea for a book imprint come about?
Dunham: We were working on Lenny Letter for six months when we started talking about a book imprint. I talked to my editor at Random House, Andy Ward, about how great it would be to do the longest form content—a book—and to champion writers who matter to us.

Have you heard any great anecdotes about how Lenny Letter has impacted readers?

Dunham: I had a really meaningful experience when a woman came up to me on the street to tell me our endometriosis [a disorder where uterus lining tissue grows outside the uterus] newsletter allowed her to self-diagnose. She’d been suffering for years without a name, and how it had given her her life back.

Have you dealt with much criticism, and if so, has any of it surprised you?
Konner: If we have, we don’t know, because we don’t have a comments section, and that’s the whole point of not having a comments section.
Dunham: Every time I do hear criticism of Lenny Letter, it’s usually someone who hasn’t read it, and has opinions about it because I’m involved, or because of Girls. But I’ve had a lot of people tweeting at me, “I hate you, but I like Lenny Letter,” which I always love.

Natasha Lyonne on Her Directorial Debut for Kenzo