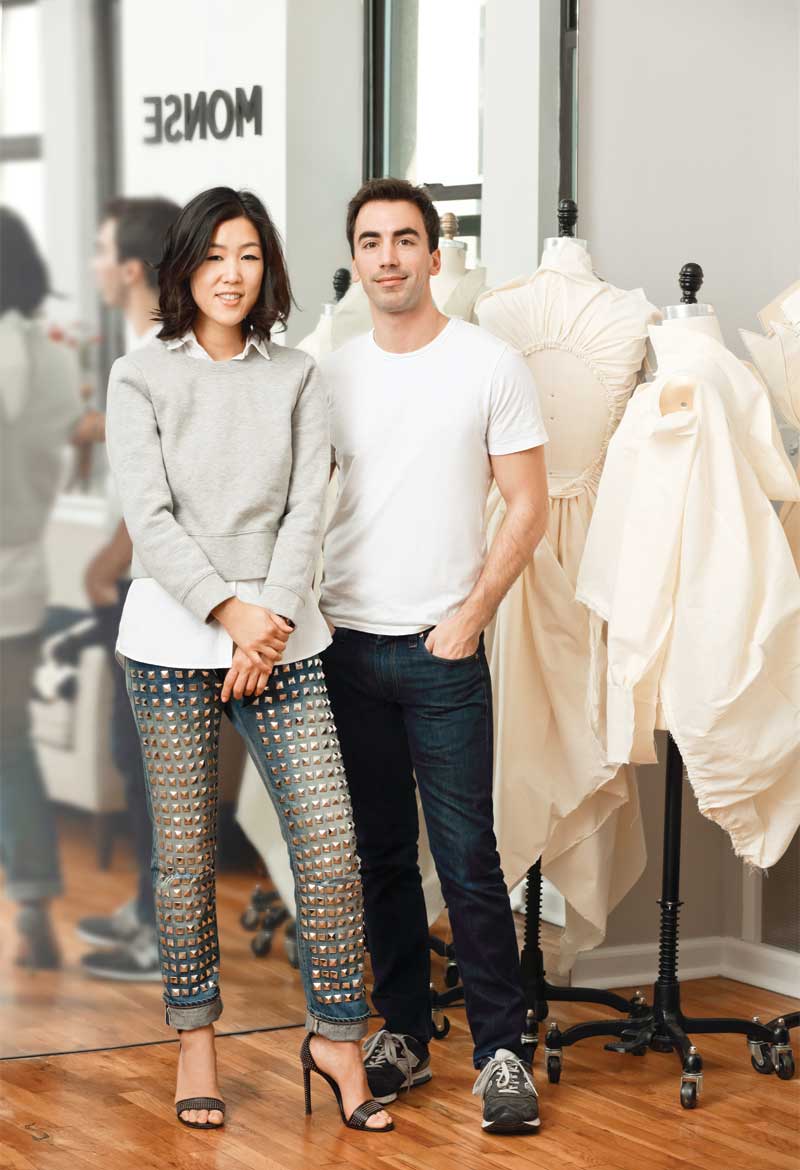 Monse’s Laura Kim and Fernando Garcia drew a coterie of top editors and buyers to their first show by the strength of their sketches. After the last look exited the runway, it was clear that NYFW-goers had identified the buzziest new brand of the season. As veteran designers for Oscar de la Renta—Kim spent 12 years at the house and Garcia worked there for six—their aesthetic is both referential and youthful, with a fresh take on edgy elegance that’s appealing to both millennials and lunching ladies alike.

Why didn’t you name the brand after yourselves?
Fernando Garcia: Monse is my mother’s name. Laura thought of it. When I heard it from her point of view it sounded feminine and strong, and we liked the length.

What did your mom think?
Fernando: She’s incredulous and flattered.
Laura Kim: I once sent her a bill for something because it had her name on it. [Laughs]

How did Oscar feel when you told him you were going to start your own line?
Laura: He could not understand why we would want to leave. At first, he thought we had found other jobs at a big design house. It was almost like a divorce. It took a couple of months for him to digest it. But you know, I would have been a little upset if he hadn’t been upset.

When did you officially leave the company?
Fernando: In February 2015, Laura started working on the business plan—a three-to-five-year structure so we could see what every day would cost us. At that point, I was helping Peter [Copping] for the Met Gala, and by May, we were both officially on our own. We started working on sketches and ideas, and sourcing fabrics.

How did you settle on the aesthetic?
Fernando: We wanted to have a product that was relatable to many women, and we thought that the idea of the dress shirt hadn’t been tapped into enough. It’s sexy and relatable, and women gravitate to it in a store even if they don’t know the brand. Given that we are a new company, we wanted to fall on an idea that is a little bit more bankable.

What is the inspiration this season?
Fernando: This season and going forward, we’re always going to gravitate toward stripes, shirt ideas, and bold colors. We want to make sure it looks easy, because that’s when a woman looks her sexiest.

When you launched, you weren’t complete unknowns to the industry. Did that help?
Fernando: Yes, but more than anything, what helped us is the training we received, and the understanding of what buyers gravitate toward. From a PR standpoint, we know what’s relevant in today’s market, and what kinds of looks celebrities are wearing. At Oscar, it was very formulaic—if a dress did well one season, we made sure we had two new versions for the following season.

What’s been your biggest challenge?
Laura: The finance part! I did get to see how the budgets and spending worked at Oscar, but of course the cash flow there was much larger. But our fabrics are actually nicer, because in a big company, you have to have a merchandising point of view, whereas we just buy what we really love.
Fernando: It’s fun to be experimental and not be scared of doing something that won’t cover a woman’s bra, God forbid. We threw all those rules out the window, and tried what felt good and relevant to us.

Who else has mentored you?
Laura: Sarah Rutson at Net-A-Porter.
Fernando: Laura reached out to her randomly on LinkedIn over the summer. We were surprised to hear back from her. We went to her office, and she was so warm and friendly. She saw the sketches and the shirt idea, and she told us to push that idea forward.

Which retailers are on board?
Laura: It was a complicated negotiation. Net-A-Porter wanted online for everything. Bergdorf Goodman and Saks Fifth Avenue had a little war, but Bergdorf took it in the end, because they brought in Neiman Marcus. We weren’t able to do Moda Operandi or MyTheresa.
Fernando: That was heartbreaking, because all these people we had reached out to were really supportive, and we had to turn people down. Net-A-Porter made a monochromatic buy, which for us was surprising. At Oscar we would always hear, “Color, color, color, color.”

What was Oscar like to work with?
Laura: He was so much fun. There was never a quiet day.
Fernando: It was all about gut reactions—very instinctual. Leave it or drop it! The decision-making happened very fast; that was the most fun part.

How did you find his personality?
Fernando: He was feisty.
Laura: A year ago, I didn’t miss the entertainment every day, but now, my life is so quiet without him. The office was very quiet after he passed away.

You also worked with Peter Copping.
Laura: He’s quiet.
Fernando: He’s very different from Oscar—he’s extremely organized. We learned so much from him.
Laura: He was very strict about everything we would do. You couldn’t have cell phones at the fittings. Oscar always had his phone at the fittings. [Laughs]

When did you know you wanted to work in fashion?
Laura: As early as 3 years old, I wanted to be a designer. I went to school for it, but I learned about sewing and patternmaking before that.
Fernando: I learned sewing and patternmaking on the job. I learned it from Laura!
Fernando: When I first came on board at Oscar, there was a need for someone to do embroidery and make little clutches. I started there. Eventually, I moved into eveningwear and VIP dressing.
Laura: There was no job description at Oscar. You did whatever was needed at the time.
Fernando: He liked having a small team.

You’ve already dressed celebrities. How?
Fernando: [Stylists] Erin Walsh, Kate Young, and Cristina Ehrlich have been very supportive from the beginning in getting their clients to wear Monse. Later on, I was in Lake Como researching fabrics and I contacted Amal Clooney. She saw our sketches and told us what she wanted, and she wore the dress immediately.

What are your goals for the next five years?
Laura: Everyone says that fashion brands aren’t profitable for the first 10 years, but I’m not okay with that. I want stability on the finance side, and healthy growth every year.
Fernando: Maybe our first boutique!