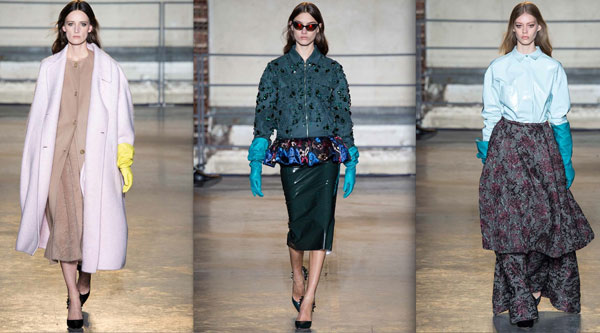 (NEW YORK) Rochas
There were more of those signature oversize overcoats chez Rochas this Fall, a few of which were fashioned in pale pink and baby blue worn hues and styled over camel colored overcoats and pastel leather gloves. Various slouchy long gloves accented nearly every look, in fact. Some came in pastel and others came with black spiky embellishments in true femme fatale fashion. Lady-like tops and skirts got a dose of edge in patent leather and some looks were worn with Matrix-esque looking glasses. A fully gold sequined coat dress stood out while other evening looks played with proportions in Gone With The Wind style full floor-length skirts mostly all done in various jaquards with hints of metallic sparkles. While the Rochas proportions and DNA are still there, it looks like newly-appointed creative director Alessandro Dell’Acqua is taking this label into a slightly edgier realm.

Alexis Mabille
A nod to the ‘90s or a new twist of femme bows? The latter was the case at Alexis Mabille’s Fall showing, where sweet looks were fashioned from what appeared to be pairs of sleeves (but done more subtly than that smash hit Celine Fall ’13 cape/coat number). Also on the docket: a plaid party! After kicking off with a mishmash of frothy sheer gray separates encrusted with pretty embellishments, sharp and swingy suiting, and tricked-out sweatshirts, Mabille segued to strong, often swingy silhouettes bedecked in checks. A smattering of chapeaus rounded out things, as did rich, cinched separates in glimmering jewel tones, with the ruby and emerald pieces of particular note. Though the darkly romantic noir lace looks aren’t too shabby, either.

Gareth Pugh
The latest installment of Pugh’s futuristic design odyssey involves crisp, pristine shades of white, and lots of it, from a slick trench sporting a rubbery sheen to pieces that evoked (very chic) Saran Wrap…to a dramatically necked topper that evoked feathery layers of Post Its. The drame wasn’t confined to below the neck, considering the snowy-hued hats were cartoonish in height. Flashes of silver lent a metallic palette cleanser to all that white, but the spate of looks was completely devoid of actual color. There were also enough bizarre plastic fabrications tossed in to induce a bit of head-scratching. But that’s the usual reaction to a Pugh show, now, isn’t it? If anything, it’s a whole new wardrobe for the ultimate ice queen.