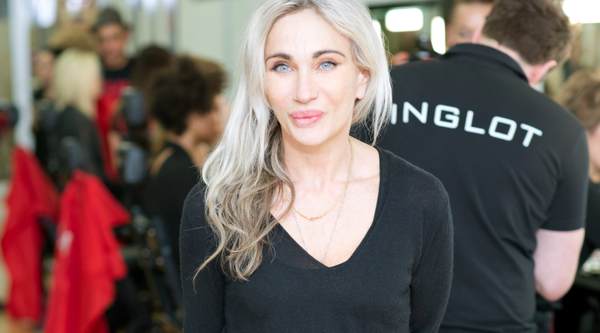 (LOS ANGELES) With Hollywood in full Oscar frenzy, we caught up with Coterie darling Yoana Baraschi, whose star following is growing by the minute. Guess who’s dressing Olivia Wilde, Katy Perry and the all-time doyenne of chic, Heidi Klum?
BY DENA SILVER

Who was the first celeb to wear your clothes?
Heidi Klum wore a dress of ours on an episode of Project Runway about 10 years ago. We didn’t have any PR at the time. I don’t even know how it got to her; I guess it was just beginner’s luck!

Heidi is our favorite! What was the impact of that moment?
It created excitement and gave impetus to the sales people and salesforce! I can’t put a number on it, but it certainly created positive energy and excitement around the collection.

What looks do the celebs gravitate towards?
They like iconic dresses, which are usually very special, like a little cocktail dress that’s multifunctional. It might be embroidered or embellished with a special technique, but it’s not an occasion dress, or a super casual one. It’s the kind of dress you want to wear when you have a special moment in your life—a red carpet event, a date, or a movie screening.

When your team notices that there’s a celeb wearing your clothes, what’s the next step?
We try to post about it on social media, and at the same time we send out an email blast to our showrooms so they can reach out to their own contacts.

After that, do you notice a bump in sales?
Yes, especially in digital sales. And then, stores start to call in and say that they want the specific garment that the celeb wore.

How important is it for celebs to don your frocks?
It’s not something I chase at all, but I’m very flattered when they discover the collection on their own. Many stars who’ve worn the brand weren’t solicited by us, but they walked into Encore Malibu or Billy’s in Tarzana and discovered our designs on their own.

Any actresses that are muses for your work?
The way Cate Blanchett wears clothing is so inspiring.

Which celebs would you love to dress?
Scarlett Johansson and Rihanna!

Is there such a thing as bad press?
The only time I wasn’t super happy was when a certain actress wore one of our black and white scarves to court!

You’ve teamed up with Olivia Wilde and Barbara Burchfield’s philanthropic company, Conscious Commerce, to sell a dress at Anthropologie. How did it go?
We sold the dresses, and signed a check for $100,000 to the charity in Calcutta. They’re opening a school with the money, I plan to visit this summer.

What kinds of Yoana looks does Olivia like?
She loves pieces that apply to her daily life; she probably has quite a number of my jackets by now!

Any other charity plans?
This year we’re working with GEMS, which helps girls who have been affected by sexual trafficking. We thought that we needed to put a light on the fact that this is happening in the U.S.

How was your Fashion Week?
We had a pre-Fashion Week presentation. It was a preview on models and we did a collaboration with makeup company Inglot. This season we’re doing a Fall photoshoot with Chelsea Leyland, photographed by Greg Harris. Comic book artist Sanya Anwar will collaborate with Greg to put the storyline in a comic book format!