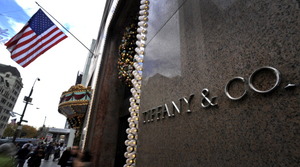 Based on recent news reports, it seems that well-executed jewel thefts are totally in this season, but in this case the sticky fingered criminal has been caught…and, to top it off, Ingrid Lederhaas-Okun, a former VP of product development at Tiffany & Co. was put into a pair of (bling-free) handcuffs on Tuesday morning at her Darien, Conn. home. The charges she’s up for? Reselling over 200 pieces of fine jewelry bedazzled with diamonds and precious stones which were illegally snagged during routine inventory reviews that someone of her stature would be entrusted to carry out. The former jewelry exec reportedly pocketed a cool $1.3 million from her sneaky tactics. Here’s to hoping she can at least rock a diamond chain in prison!

Right to Bear Arms (And Legs)