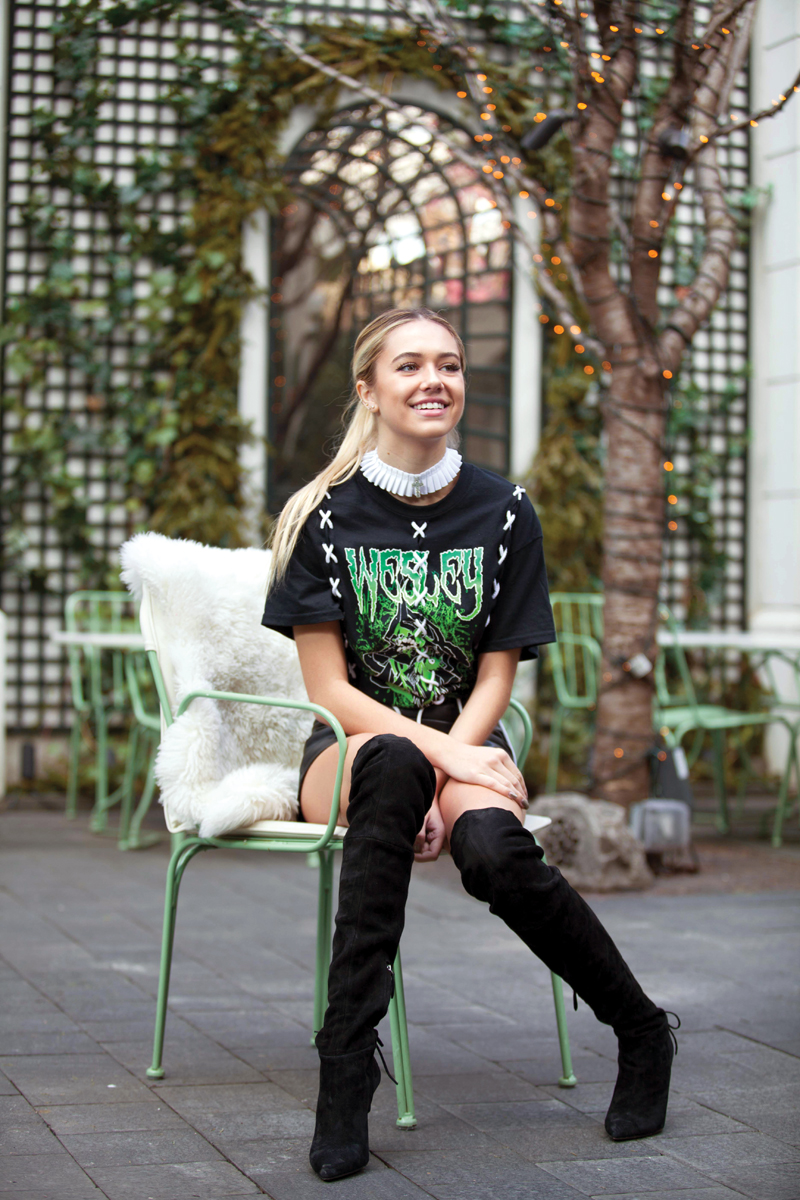 Is Delilah Belle Hamlin the next SoCal mod du moment? The 18-year-old daughter of Lisa Rinna and Harry Hamlin (so, cheekbone royalty) took us to Ladurée in New York to chat about school rules, Instagram skills, and forensics. What did you expect?

What was your first modeling job?
My first gig was over a year ago, and it wasn’t paid—it was an editorial in The Malibu Times. Since then, I’ve done a second editorial—a spread—for the same paper with my family, and I also did an editorial for Teen Vogue and walked for Tommy Hilfiger during NY Fashion Week.

How are you keeping up with your studies?
I’m actually homeschooled now. I went to Australia to work with a few companies last month and had to go away for a couple of weeks, but my school wouldn’t let me, so that’s why I decided to make a change.

Do you have plans to apply to college?
Yes! I just applied to seven. They’re mostly in New York, so I’m hoping to study here and also work.

What do you think you’ll major in?
I’m obsessed with criminal psychology and profiling.

Some people think you and your sister, Amelia [Gray Hamlin], will be the next big sister act in the modeling world. Thoughts?
It’s flattering. I like hearing that, but I also want to be my own person without being compared to others.

What’s your relationship like with your agent at Elite Model Management?
I have an unusual relationship with my agent, Jon Ilani. We’ll go out to dinner and to parties together.

Best advice from your mom?
She tells me to be myself and not really care about what other people think. That’s kind of hard when you’re in the public eye.

Has your turn on The Real Housewives of Beverly Hills helped your career?
Probably! I don’t quite know who really watches the show, but it definitely has raised my followers on Instagram. It’s a good platform for modeling as well, because they did a storyline on me this season.

Which IG rules do you live by?
I don’t like to just post random things, like baby pictures or a quote. I don’t really post food, either. As for filters, I use VSCO—“B1,” to be exact. Then I do some contrasting, but I don’t really edit them a lot. I just like making the colors and light richer.

Has your mom ever told you to take down a photo?
Yes! It was probably a bikini photo. She wants me to be more modest, but I don’t think I’ve posted anything too raunchy.

You also sing. What’s your genre?
I like so many kinds of music: pop of the Adele, Lorde, and Halsey style, but I also like Taylor Swift. I haven’t recorded my own music yet, but I’ve been in the studio, so I hope in 2017 things will get rolling a little more. Modeling is my big focus now, but I would love if singing and modeling were equal.

Have you ever listened to the radio show host, Delilah?
I did not know she existed! But thank you for telling me—I’ll have to look her up. Sounds interesting.

Oscars 2017: The Best Looks from the Red Carpet

Lisa Rinna Takes On ‘Karens’ Who Are...