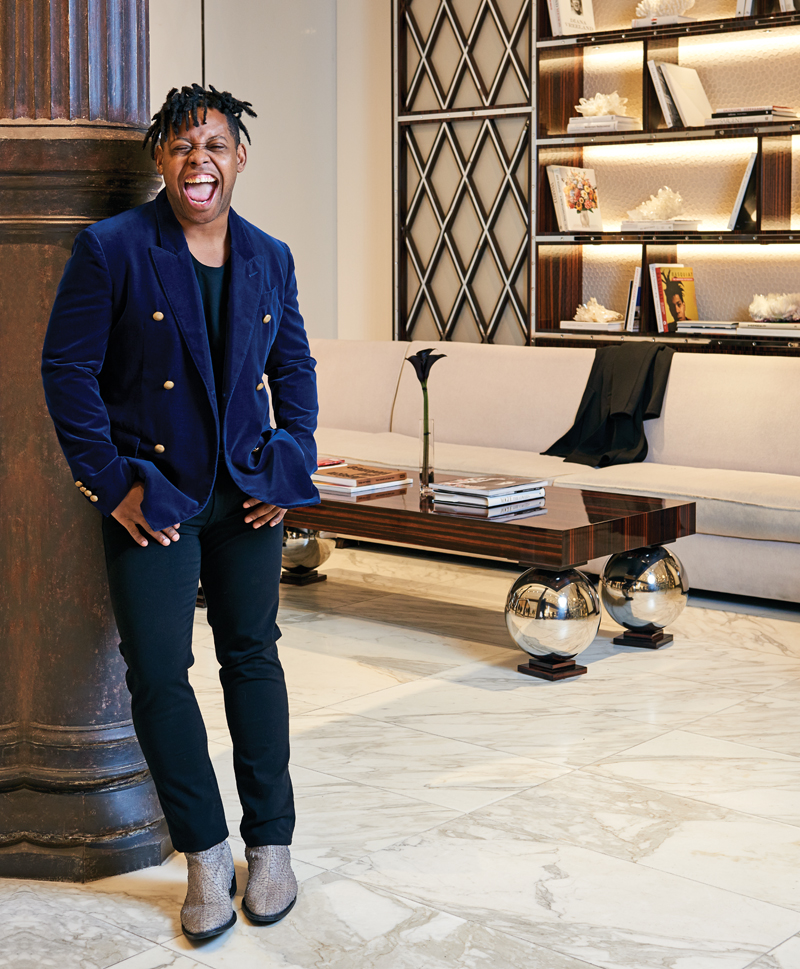 As the manager behind Nick Jonas, RJ King, and Ellar Coltrane, Wilhelmina’s Kendall Werts has become a go-to guy for creating compelling narratives for both established and emerging talent. Turns out that Werts’s own life story is just as fascinating.

You specialize in helping artists tell their stories. We’d love to hear yours.
I’m from downtown Detroit. My mother was around when I was a child, but she really didn’t take care of me. My grandparents did until I was 10, and then I went to go live with my aunt, who lived even farther downtown, but in a nice part of downtown. I went from being raised in a housing project to living down the street from the Mayor.

What was your childhood like?
Very happy. If you’re the right kind of poor—if that makes sense—you don’t see bills. You just see joy.

What were you into as a kid?
Fashion. It rescued me. My grandmother would turn on the soap operas, and we would watch them for hours and hours. When I was in high school, at one point, I watched nine of them. I’ve always liked narratives. Fashion and television were ways of escaping and living in a dream that wasn’t my own.

What was the first fashion moment in your life that you remember?
My grandparents would throw big dinners during the holidays. One woman used to come—I didn’t know she was a stripper; I just knew she was a little sexier than all the other girls. She showed up to dinner in a mink. I had never seen anyone with such refined taste in this way.

What was your style like?
Very basic. We had an amazing mall, but it was in the suburbs, where all the car people live. My style was very Tommy Hilfiger, Nautica, Polo, Chaps—then I found Armani Exchange when I took a bus to this mall called Somerset Collection. The next day, I went to school, and you would think I was wearing Chanel couture. In my mind, this was Armani—the Exchange had nothing to do with the situation.

What was your school like?
It was a magnet school, and you had to take a test to get in, and you started kicking out people left and right—you started with 400 and ended up with 85 people in my program.

When did you first realize that you were a smart kid? Or when did someone else see that in you?
People always saw something in me, but because I was so self-involved, I couldn’t see it in myself. When you have a situation where neither of your parents raises you, that comes with a bag of tricks, and you have a way to navigate through life. I always wanted to be the funny person—I was much more interested in being liked than being known as smart.

What did you do after high school?
I went to a university in Michigan for three semesters. There, I was like, “I’m gay. What does this mean?” And coming out in this way led me to drop out and transfer to a fashion school in Chicago. After that, I moved to New York with $75 and slept on my friend’s couch for eight months. I was not going to go back to Detroit; Chicago was not how I saw myself. I always tell people I represent that we have to carve out a plan, because I didn’t really have one. For a few years, I coasted, trying to survive. In New York, I started working at Pat Field’s. I went to my first club the night I moved here. I’m a good dancer, and I always knew that there was power in expressing that out at night. I had no money to buy drinks, so I danced and drank water. I didn’t know anyone in the city, but I met someone who worked with Pat, and I got a job. I was with Pat for about four months, and then I moved on to Banana Republic, and I was like, “I thought I was some club kid, and now I’m folding sweaters?” I did that for about a year, and then I moved to Hervé Léger. I worked there for two years, and I was the No. 1 salesperson in the company. I sold a dress for $25,000 over the phone.

How so?
The client was going through a divorce, and she was on her way to Teterboro to take a private plane to visit her shaman in California. She saw the dress in a window and wanted me to tell her how she would feel in it. I did, and after I hung up the phone, something clicked: I didn’t move to New York to say, “How may I help you?” I moved here because I’m really good. A friend of mine connected me with Supreme [Model Management], and for eight months I worked two jobs.

How did you fully transition into agency life?
I didn’t like the women side. I’m such a straight shooter that not everyone can take that, and I didn’t want to put a woman through what I felt could be the worst in me with a job. But I had no problems doing that with a man! [Laughs] David Bonnouvrier hired me at DNA, and my time there was a foundation. I was an assistant, and I was watching the women’s board there, their eye, as well as watching Taylor Hendrich, who was my boss. The foundation was laid at DNA, but the house has been built at Wilhelmina. I remember so vividly walking up to Taylor and saying, “Taylor, I’ve been here for a year. I need more things to do.” And he was like, “I don’t need you to do anything. If you find a job, feel free to work on it. I don’t have to give you anything.”

How did you proceed?
We had this model, Andreja Pejic. Andreja had been in New York only one time, and I said to myself, “Wait a minute. Nobody had heard anything she’d had to say.” So I secured a page for her in New York magazine, and that turned into a huge feature, “The Prettiest Boy in the World.” I was quoted in it about four times. When the story came out, the calls started coming in for me—and I was the assistant!

How has the modeling business evolved most drastically?
Now, a boy in Arkansas can post a picture of himself and have the fascination of 2 million people. Everyone has to have a hook, a story. Print is amazing, but to get an immediate reaction, it may not be the way to go. Websites need as much material as possible, and we should be providing them with intelligent, witty content.

What excites you more—finding a diamond in the rough, or poaching a client from someone else?
I don’t like to poach clients, because I like loyalty. I like the adventure of going through the steps together, getting from point A to point Z. There is an art to stealing clients, but depending on how you steal them, the model always throws you under the bus. Reputation is very important to me, and I don’t want to have to convince you to leave your manager. I don’t have to convince you of anything. Why? Because I’m better than your manager. He knows it; I know it. The best way to do business is to carve out a niche, have everyone know what you do and how you do it, and you don’t have to steal anyone because everyone will want to be around you.

How did you evolve into the celebrity division?
Taylor secured Nick Jonas for the agency. I was doing the bulk of the editorial work for the men’s division; occasionally I would come up with some PR stunt. The next one was Ellar Coltrane, who was coming off of Boyhood. I’ve always had a thing for actors and people who are telling stories. What I’m trying to do with the celebrity division is merge commerce with high taste. I just signed Miles Joris-Peyrafitte. He’s one of the youngest people to ever win an award at Sundance. He’s cool. He’s Saint Laurent. It’s not a one-trick pony now—there are so many ways to brand talent. Fashion is a great way to elevate someone’s brand.

What’s special about Hopper Penn?
He’s an innocent, and he wants to do it on his own terms. He has a very big heart; he can’t help who his parents are [Sean Penn and Robin Wright], but he’s the one going into Francine Maisler’s office and securing a role alongside Brad Pitt. He’s the one who’s taking acting classes. He doesn’t want to be someone’s kid; he wants to be his own person.

What’s going on with Levi Dylan?
He just walked the Chanel show. We got him about a year ago, and I did not know then how to make sense of what we were going to do with him. He’s also his own person. He’s very aware of where he comes from, and he wants to be around cool people. I don’t consider him a model. He’s starting acting now. He just shot for Fay; Terry [Richardson] shot him for CR; Karl Templer styled him for Interview. He’s having a moment that’s a different kind of moment.

What makes a good agent?
You have to be very strong—you’re constantly going back and forth on rates and numbers. Being aware the marketplace is key. Everyone wants to make money; we’re a business, first and foremost. Being a good agent means knowing how to sell your client. Taylor always told me there’s a big difference between a booker and an agent. A booker is like a DJ at Hot 97—you’ve got a request? I’ll put it on. I started off with a client once; the rate was $400 for a half day. By the end of our time working together, the model was earning $5,000 for a half a day. It’s about elevating your clients and knowing the PR angle. These models become more than clients—they’re part of your inner circle.

You didn’t come to New York with a plan, but it seems like you sure as hell have one now. Where do you want to go from here?
I want to be a producer—film, television. I want to be a person who connects people. My No. 1 goal is to be a very, very effective person. I want to be respected, connected, and existing in the world that I saw on television.

The Victoria’s Secret Fashion Show Is Off to Shanghai!