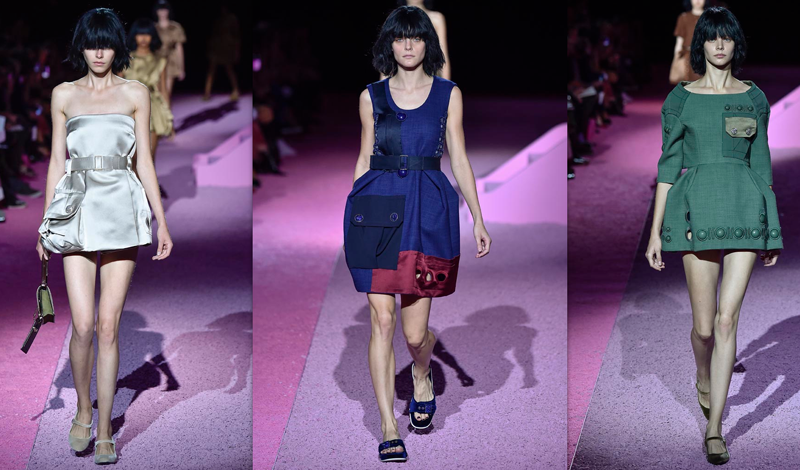 A spiffy take on uniform dressing was Marc Jacobs‘ M.O. for Spring. This season, Stefan Beckman built a to-scale Pepto pink house in the middle of his new location, the Park Avenue Armory—a bit fancier than his usual Armory location, a few dozen blocks south—and provided Beats by Dre headphones filled (at very full volume!) with music director Steve Mackey (that’s Katie Grand‘s husband, by the way) speaking, in a computer-bot distorted voice, doling out puzzling, pretty meta observations and show producer-like directions about the models and set. (It was inspired by John Smith’s 1976 film, The Girl Chewing Gum, apparently.) Souped-up uniforms that swayed between military and medical in theme was the scheme for Spring chez Marc Jacobs: short, puffy, embellishment-strewn pieces in gradations of army green, a healthy dose of navy, and plenty of neutrals ruled his runway. But things got femmed up a bit thanks to shiny silk duchesse with glimmering hits of mega-sized, crystal-encrusted buttons. Jacobs tooled around with oversized grommets, too, some as large as golf balls and producing the effect of hard-edged eyelet. Jacobs piled on various bags—classic pocket-strewn messengers, hobos, petite satchels—often breaking up the mostly monochrome looks. As for the tresses, they weren’t too far off from Fall ’14’s messy matte pixies: Guido created slighted mussed, bluish black, bang-bedecked bobs which pretty effectively obscured the mods’ identities hiding beneath those floppy coifs. On the pieds front, the pink gravel runway seemed doable in Jacobs’ luxe, sparkly take on Dr. Scholl’s slides; meet your next Birkenstock, darlings.