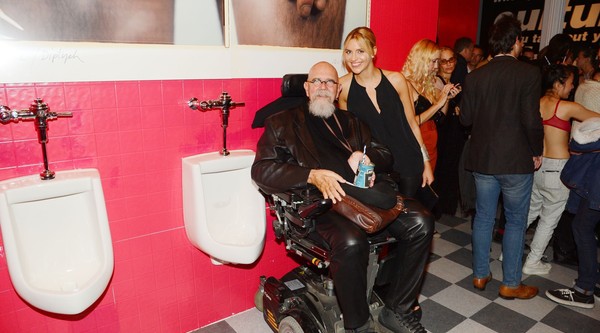 The short-lived Eighties nightclub, AREA, had a revival of sorts on Tuesday night. The result? New York got just a little bit weirder, at least temporarily. The club, which was in full force from 1983 to 1987, put a heavy emphasis on art by swapping themes every five or six weeks. AREA was the work of Eric Goode, Shawn Hausman, Christopher Goode, and Darius Azari, who created the nightlife haven at 157 Hudson Street. The likes of Andy Warhol, Jean-Michel Basquiat, Chuck Close, Keith Haring, Kenny Scharf, and Julian Schnabel created works for the club back in its heyday. To celebrate the book AREA, published by Abrams, a weeklong exhibit at The Hole kicked off last night. The gallery was utterly transformed for the occasion: the entrance was set up like a real supermarket, which attracted a few partiers to snack from the shelves. The rest of the celebration was complete with faux Campbells Soup cans in place of cocktail glasses, a replica of the club’s restroom, and walls that were plastered with art. Even Rick Genest, he of the skeleton-esque face tattoos, was part of the interactive art (which also involved some folks wearing face masks…and nothing else.) Following the book bash, guests headed a bit north to The Bowery Hotel for the dance party, where the likes of André Balazs, Scott Lipps, Mario Sorrenti, Calvin Klein, Johan Lindeberg, Stella Schnabel, and Simon de Pury partied like it was 1987.