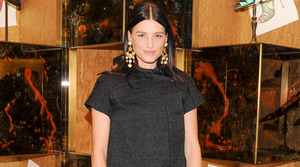 (NEW YORK) Tabitha Simmons Explains How A Collaboration Naturally Comes To Fruition [Fashionista]
A simple conversation lead to her creating a line of shoes with Tom’s Blake Mycoskie.

Call Up Your Hairstylist, Jennifer Lawrence Reveals Her New ‘Do [Racked]
The Hunger Games star debuts a dramatic chop just weeks before her next big premiere.

Are Instagram Followers Just The Flâneurs Of Our Time? [T Magazine]
With the tap of a finger you can view a still life of any designer or tastemaker you desire.

The Upcoming Yves Saint Laurent Film May Be In French, But The Clothing Translates Beautifully [BlackBook]
The biopic is one of the two films on the late designer approved by Pierre Bergé; both will be released in 2014.

David Beckham Has Designed A Moto-Inspired Collection For Belstaff [Vogue UK]
He will also be the star of the brand’s international ad campaign.

Catching Up With Escada's Megha Mittal At Saks Fifth Avenue

TOMS Debuts A Nolita Boutique Plus A...

Who Are The Highest Paid Models of...

Who Are The Highest Paid Models of...