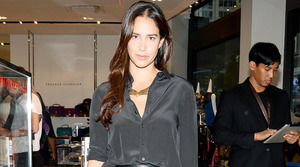 (NEW YORK) Brazilian designer Ana Khouri‘s baubles are the most buzzed about pieces in the fine jewelry world this year. The Daily has been seeing Khouri everywhere from dinners hosted by ELLE to New York Fashion Week, where she hosted a presentation in her chic pad at the Time Warner Residences overlooking Central Park. Not to mention all of those features she’s been raking up in major fashion and lifestyle mags like W, Interview, and Vogue. Net-A-Porter has already caught on and Barneys just threw a fashionable fête last night at Indochine (see our Gallery!) to announce their own launch with the designer. The Daily caught up with her to see how she’s managing her soaring success.
BY PAIGE REDDINGER

You’ve been getting tons of press recently. Who was the first to cover you?
W Magazine was the first. Then Interview covered. I feel like Net-A-Porter also was a big step. I’m also being sold at Barneys, The Webster in Miami, and Colette in Paris. Vogue was supportive as well. they wanted to cover it in their September issue, which was great, so they featured me later. It was super nice. It’s great timing because I’ve been doing this for 10 years, but I only moved to New York a year ago when I decided I wanted to go global.

Are your pieces one-of-a-kind?
I make them in very select quantities. I only make two or three pieces at a time of one design. They’re very unique! The idea is that I continue making pieces and doing my work, but it’s not about a big range. Even for the e-tailers, I make pieces in very limited quantities. Until I sell the last piece of a specific group, I still offer it. Even if it takes me two years to sell the last piece of a series, I’ll still carry it.

You have a background in sculpture. Why not opt for the traditional artist route?
I met this guy while I was in art school doing sculpture and he helped me with a show that I was doing in Sao Paolo, about hanging sculptures on the body. He was an artisan and he was hanging the sculptures for me and then I got really attached to him as a friend and I learned from him how to do the jewelry. So from there I started making pieces for me.

What was the first piece you made for yourself?
I started with the head pieces and then from there I started making jewelry and then people started requesting it and it got to a point where I said, “Wait, I’m not a jewelry designer. I’m a sculptor. What am I doing here?” So I moved to New York, I studied, and I got certified in gemology. I went to Parsons and FIT, ad then I went to Central St. Martins in London. After that, I went back to Brazil and started working. You need to have the knowledge even if you aren’t working with conventional jewelry.

When you started making pieces for yourself were they fine jewelry pieces?
Yes, they were gold. But when I started I was doing the tiaras. I couldn’t do some of the more complicated pieces that I do now. I’m really working on where I go next. I want to build the DNA so that it’ll be recognizable as mine.

Why did you wait so long to come to the U.S. market?
Graduating from art school and being around artists, it’s much more about looking into yourself and your art than it is about selling. Last year I was really settled in Brazil and I felt like I really wanted to take this to another level. I really love doing it, I studied for it, and I live for it, so why not? So I came back to New York. The first time Barneys saw [my collection], they bought it right away. They told me that was the first time they ever saw a new designer and bought them right away. The same with Net-A-Porter. I think it’s good because I took time to something to say, and not just be another jewelry designer.

How did Net-A-Porter find you?
I was coming out of a restaurant; Holli [Rogers] knows my publicist Daniel Urzedo. She said, “Wow, what are you wearing?” and I told her it was my design. She came to my hotel the next day to see the collection.

Wow, sounds so organic!
Yeah, it seems to have happened naturally. The same with the press. I met Samira [Nasr] and she went to ELLE with the story and they loved it. Same with Vogue. Claudia [Mata] from W was at Karla’s [Martinez] wedding, Karla saw Claudia wearing my jewelry, and wanted to photograph it. It’s been great. It just feels like the right time!

Did you have a big following in Brazil before you launched here?
Yes, I was really settled in Brazil, which is why I kind of felt like it was time to branch out. But I already had people like Madonna and Carine Roitfeld wearing it. But overall I just felt like I had to wait for the right time.

Those are some big names. Was Madonna the first American celeb to wear your jewelry?
I think so. We actually have a friend in common. Her daughter has worn my jewelry, too. I moved to New York a year ago, but she actually wore it about six years ago for the first time. It got huge media coverage in Brazil when that happened. When you’re committed to the work you’re doing, things will happen. You can’t rush; you just have to do what’s right when you feel it’s time.

Game On! Etienne Aigner Debuts A Flagship Store In Soho