Game On! Etienne Aigner Debuts A Flagship Store In Soho 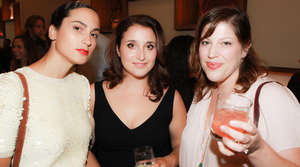 (NEW YORK) Last night at 65 Green Street in Soho, Etienne Aigner threw a big bash complete with a “designer game-nite” for the opening of the first-ever flagship for the 63-year-old heritage brand. Guests sipped on cocktails like “The Royal Blush” courtesy of Tito’s Handcrafted Vodka while trying their hand at various games like checkers designed by Fredericks & Mae, Belgian darts by Best Made Co. (yes, they have other things besides their pervasive axe design), poker playing cards by Joe Doucet, and BareBones Dominoes by The Principals. The latter two designers actually hosted their own games at the new space.

So, how did all of these influencers from the design world get involved in this fashion event? Monica Khemsurov and Jill Singer of the influential design website SIGHT UNSEEN curated the evening’s theme. “They’re all designers that we had a previous relationship with and for some reason games have been something that people have been exploring lately in the design world so it came really naturally to us,” said Singer. “They were pre-existing games that had all happened to have come out in the last year. Daniela [Anastasio Bardazzi] the creative director told us she had been throwing around the phrase ‘Bring Your A Game’ in the office so once that became the theme it was pretty easy from there.” So how did she fare at the games? “I played darts and I did really great on the first round and then I kind of went downhill from there!” said Singer.

Khemsurov and Singer are guests on Etienne Aigner’s web profile series “Ladies Who Luck” based on the idea that success is never happenstance. “Each season, my inspiration always seems to stem from women who have full lives, make the most of what they have, and yet carry a presence that is second to none,” said Anastasio Bardazzi. “Ladies who Luck is about this woman.  She’s not into labeling, she’s into lifestyling.”

Anastasio Bardazzi’s idea of lifestyle is also a very good time. Guests were given cards were they could get stamps for winning games at each station. If you won six games, you snagged a prize. But every lucky guest left the party with a pair of “Bring Your A Game” leather moccasins, which were displayed at the front of the store and are apparently all the rage. “They’re like what Hugh Hefner would wear if he had a sex change,” we overheard one guest saying. Sold? We are! If you want a pair, you know where to find them.
BY PAIGE REDDINGER