Jeremy Scott Shares the Source of His Creative Power 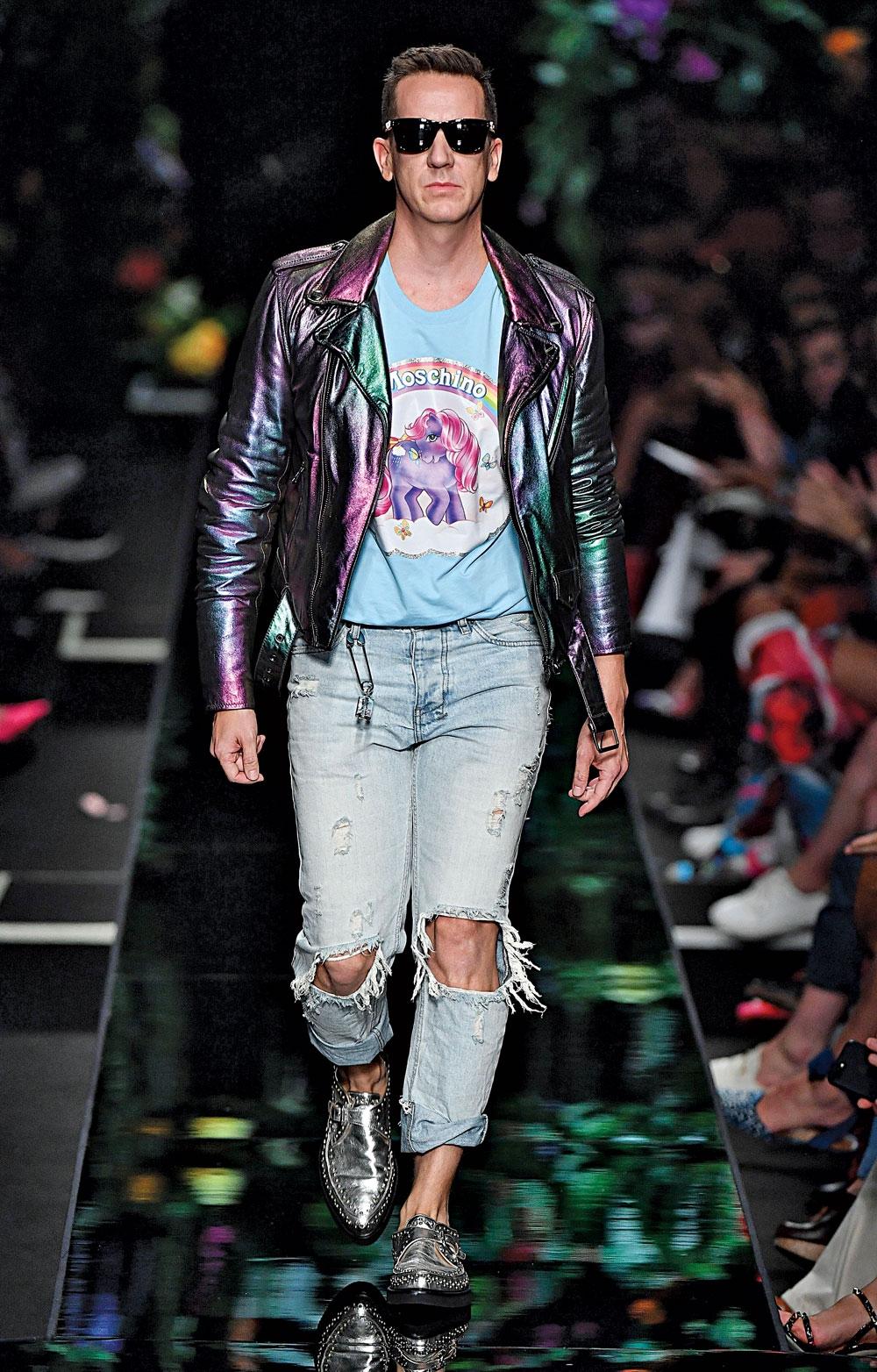 Jeremy Scott, the genius behind Moschino and his own eponymous label, is a fountain of both vision and originality. The People’s Designer tells us how it’s done.

What’s the first thing you ever created?
I didn’t learn how to sew properly until I went to school, but I cut up vegetable ads from Japanese newspapers and taped them together to make a jacket when I was a kid. I made a hat out of scraps of velvet. It was all very intuitive. They weren’t the most functional garments, but they had personality!

Who encouraged your creativity as a child?
My family. No one was dismissive. We came from farm people, so we did creative things out of necessity. My grandmother saved every scrap of fabric that she could and would make quilts out of them. We were poor. My grandmother would save every bread wrapper and weave together a rug or a jump rope. I grew up seeing one thing becoming another. 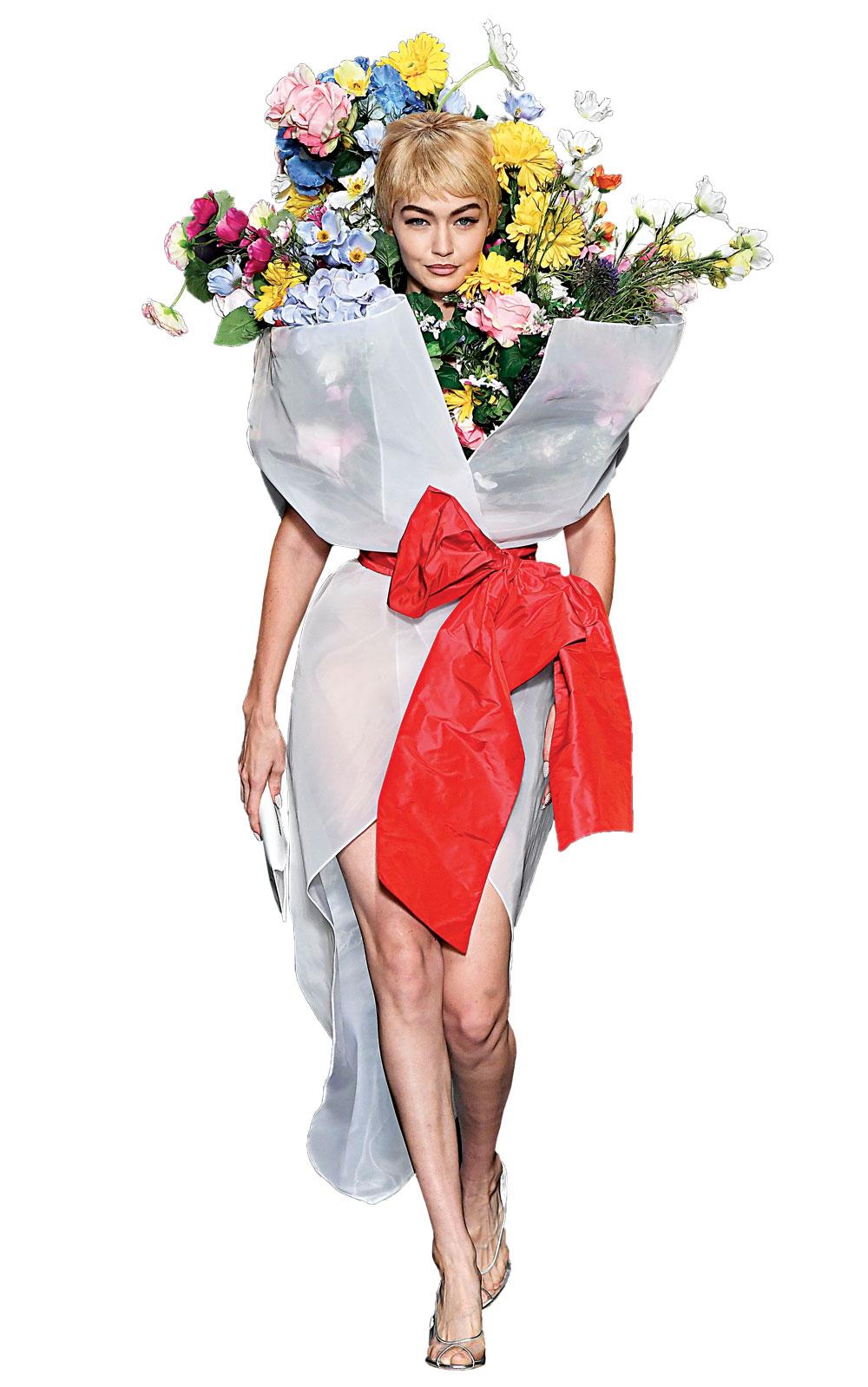 A look from Jeremy Scott’s spring 2018 show for Moschino. (FirstVIEW)

Did you take art class in school?
I was in art classes early on in public school. When I got to high school, I devoured them because there was more flexibility in my schedule. I took every class available, to the point where they had to create a new code and give me my own free time to create art. I was an exemplary student, and my teacher had me eventually teach her freshman class. She was very supportive of me. I was a super, super art student.

Did the other students appreciate your creativity?
No. I had my group of friends, but in large part I was ostracized at school. By the time I was a senior, I had cycled through and it was harder for younger people to be too much of a dick, but the first couple of years were excruciatingly awful with being physically and verbally attacked. It was challenging. I never really thought about it much until I made my documentary [Jeremy Scott: The People’s Designer]. I kept moving forward and had to shut myself off mentally to what was going on. I realized it was temporary. I knew I would get out of school and be with the people I chose. I wasn’t going to have an ordinary job.

You put out so many collections every year. How do you nurture your creative spirit?
I’m always open to inspiration. If there is ever the time that something doesn’t come instantly, I move on to the next thing. There’s a lot of cross-pollinating when I’m doing one thing that inspires me about another thing. Keeping busy is helpful to keep the machine well-oiled. I don’t do anything in particular to replenish the well, but I try to keep myself a happy, whole person. I function best from a place of happiness. That’s why I live in Los Angeles. 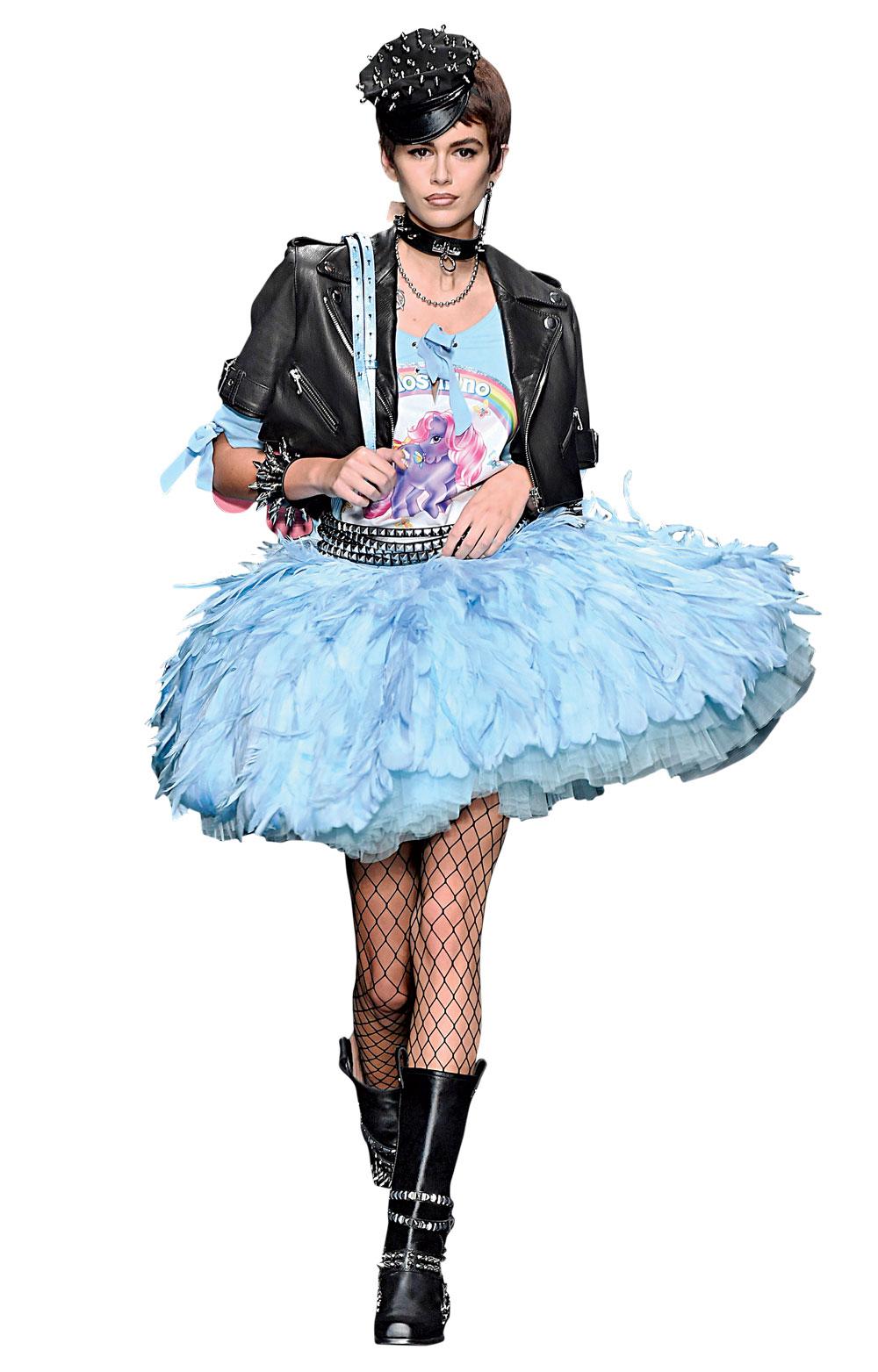 A look from Jeremy Scott’s spring 2018 show for Moschino. (FirstVIEW)

Do you ever feel creatively stuck?
Not really. My assistant can attest to this. I’ve already told her what the next three Moschino shows will be for. I’m able to plan a lot further in advance. Having scheduling works really well for me in my creativity. I work well with deadlines.

Are you able to turn off when you’re on holiday?
Yeah. I don’t do a lot of vacations, to be truthful, but I can lie on a beach and read a book. If there isn’t anything urgent nagging at me, I don’t have to worry about it.

Who do you create with?
My friends. Pablo [Olea] has been around a long time, and a lot of ideas are bounced his way. I’m inclusive [with my ideas]. Maybe it’s talk therapy — even when people disagree, it’s fine, because it helps me flesh them out.

Who are some of your favorite creators?
Ettore Sottsass [of The Memphis Group] is my favorite designer of all time. I adore him, and all the furniture he designed. Of fashion designers, Jean Paul Gaultier was my childhood hero. I loved his work and personality. He was the first designer who broke the mold of looking cool enough to hang out with at a party, but he also made cool clothes. When I was a kid, most designers looked like they could be bankers.

Do you pay attention to critiques of your work?
I don’t follow them closely anymore. It’s not that I don’t ever see them or avoid them, but I don’t think you should put your value or self-worth wholly into other people’s opinions — good or bad, positive or negative. Some people call me a genius; some people call me a fraud. I strive to do something special, unique, and from my heart. I try to inspire people, open some eyes, and put a smile on people’s faces. I’m more concerned with what my friends think!

Do you feel the industry is treating you differently these days than perhaps in the past?
Maybe I’ve become more difficult to dismiss. A lot of what I’ve done in my almost 21 years in the business has been at the forefront of where things are now. If you really pay attention, you’d have to acknowledge that. 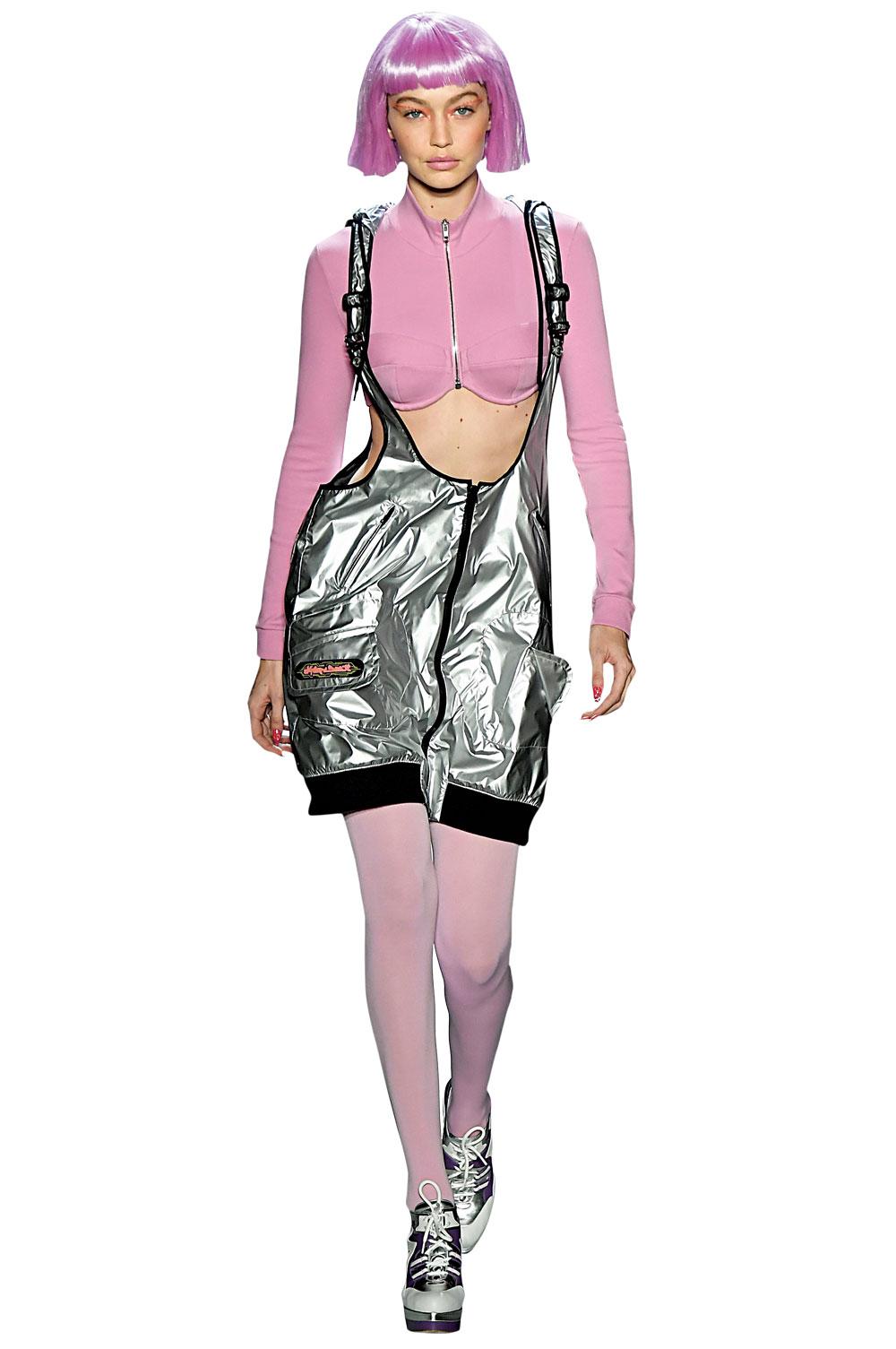 How has working within a large infrastructure like Moschino affected your creativity?
I definitely have more resources to be able to complete a fully fleshed-out idea. I’ve been able to share my vision closer to how I imagine and desire it to be.

What do you think the future of fashion shows will look like?
So many things are different from how they were 20 years ago, and yet we still gather in a room and watch impossibly tall, generally skinny girls walk a runway — and we’re still captivated. Fashion shows endure, like theater and musical performances. Something about that human aspect is fundamentally keeping us involved. I don’t think [shows are] dying.

You’ve done so many collaborations over the years. Do you have any dream project that you haven’t yet tackled?
There are still things I’d love to do. I’m always excited when I can play with the DNA of an iconic brand and create something new. I only do these things with products that I like or would want to give to a friend. There’s still an open sign on my door!

Many years ago, you told us that one of your dreams was to be a judge on RuPaul’s Drag Race.
I was on Season 2 of All Stars! It was my favorite thing I’ve ever done.

You show Moschino in Los Angeles once a year. Why?
Besides the fact that I get to sleep in my own bed at night? I go to SoulCycle on the day of my show and can be centered and zen. I love it here, and it’s nice to be able to share my work with my friends and community. It’s the most love-filled show. My heart wants to burst out of my chest. I feel so loved and so appreciated and so wrapped up in warmth. It’s hard not to love L.A.! 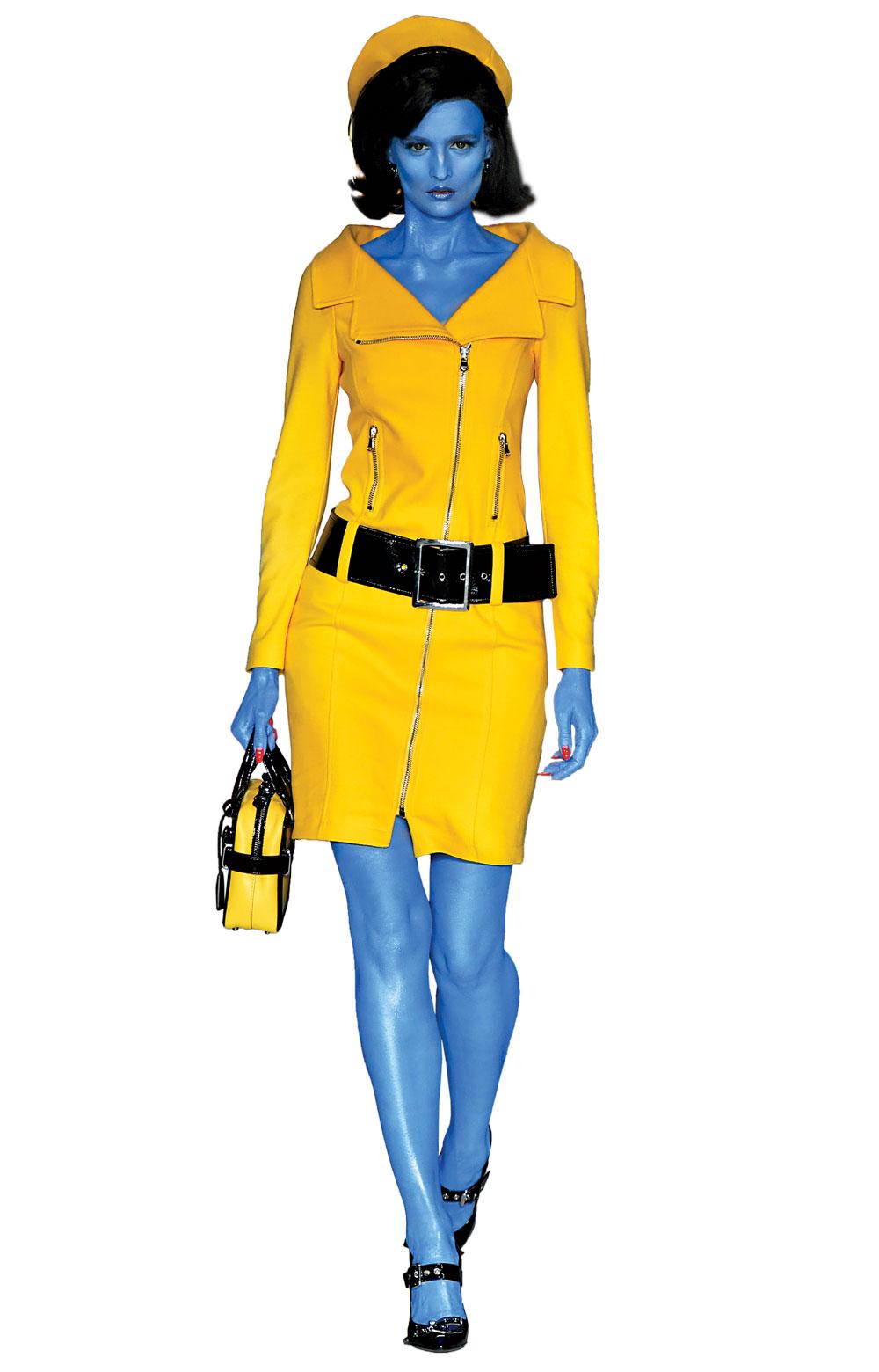 A look from Jeremy Scott’s fall 2018 collection for Moschino. (FirstVIEW)

On April 8, Jeremy Scott will be honored as “Creative of the Year” at the 2018 Fashion Los Angeles Awards, sponsored by Maybelline New York, MCM, Moroccanoil, Prettylittlething.com, and LIFEWTR.