Inside Everything But Water’s New West Village Pop-Up 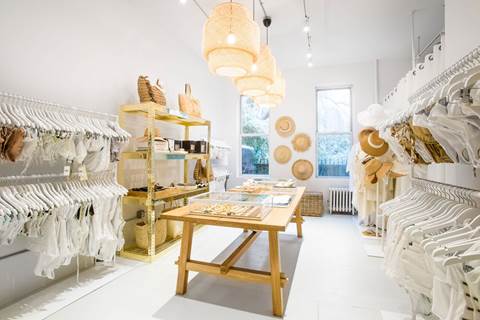 Everything But Water, purveyor of all things beachy, just opened a new West Village pop-up at 373 Bleecker that’s devoted entirely to the brand’s all-white capsule collection. The looks include swim and resortwear from 21 different brands such as Marysia, Mara Hoffman, Vitamin A, Flagpole Swim, and She Made Me. “We wanted to do something very different, fresh, and new,” said creative director Sabra Krock. “We were very inspired by white as a resort essential. We wanted to create a unique environment that felt chic, sophisticated, and luxurious.”

The pop-up will also carry accessories and select beauty products. The latter have mostly been tested and approved by the staff or are unique, hard-to-find products; for instance, a coffee body scrub that staffers swear by, Coqui Coqui scents from Tulum, pure coconut oil-based items from Cocovit, and other sea-themed candles and scents. Some of the accessory designers in stock are also unique, like North Carolina-based Twine & Twig, which creates jewelry from shells, horse hair, and antlers. Local artisans are stocked alongside straw hats by Lola, designed by a former French ballerina who opened a studio in Bushwick, Brooklyn. “I love when I find small women-owned businesses—I love supporting that,” said Krock. “I’m just really intent on not having what everyone else has.” 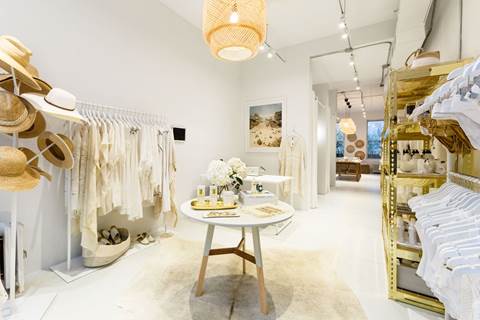 So is this new pop-up a test-run for a new downtown location? (The brand currently has one Manhattan store on 80th and Madison.) “We’re definitely interested in being downtown,” said Krock. “We’ve been playing around with ideas about where that spot is. It’s definitely on our radar. This pop-up is open through May, but we have our eyes open all the time.” Everything But Water will also open a pop-up in Miami at 1 Hotel South Beach Drive on March 1, and a new permanent retail location in Beverly Hills at 238 South Beverly Drive by April 1. If you’re out East this summer, be sure to swing by the East Hampton pop-up. A select subset of the white capsule collection will be in stores beginning in April.