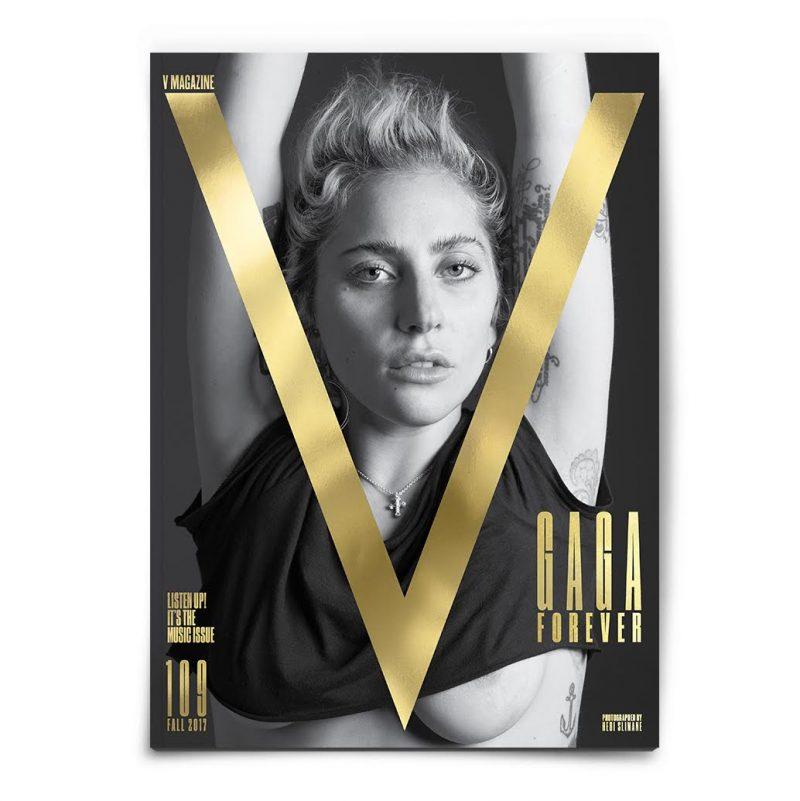 V Magazine goes gaga for Lady Gaga, who covers the book’s music issue (a.k.a. issue 109), lensed by designer-turned-photographer Hedi Slimane. The singer teases readers by flashing some underboob while wearing a black t-shirt, marking another racy cover for the singer—she appeared naked on the cover of her ARTPOP album and topless on another V Magazine cover four years ago, to name a few. Gaga, who’s currently on her Joanne World Tour (it kicked off August 1 and runs through December) sat down with novelist Tama Janowitz for the interview. “For me, Joanne, in the simplest terms, it’s the classic stories of our lives that help us return to who we really are, no matter how lost we get,” she said. “You can always go back to a loss, or the pain of a pending loss, or a challenging struggle in your family life, or your childhood. And when you go back to that place, it somehow brings you back to where you were in the beginning. And for me, that’s what writing this album was all about. Because after The Fame Monster and subsequent albums, I felt that there was a part of me that was connecting on a human level with the public and part of me that was connecting on a whole new level, one that I had been wanting to connect with them on, a sort of fantastic magical level. And now, I want more of that connection.”

“I guess, when I moved to California, the sunlight was really good for me—I was happy. The sunshine helped to keep an optimism in my music. And while out there, I developed a special connection to horses. It began when my record label gave me a horse for my birthday: an Arabian mare named Arabella. I had never taken a horse- riding lesson. I literally did not know how to ride a horse. But I just grabbed her by the mane and rode her bareback. She’s so well-trained that when I was about to fall o her, she stepped to the side to collect me. I also got her a boyfriend, Trigger—a stallion—because I didn’t want her to be alone. With him, I have to ride with a saddle. When I ride him, it always makes me feel so powerful, because he is so powerful. There’s no pressure. I just get on the horse and go. It’s sort of a metaphor for all the guys I’ve been with,” Gaga added.

The issue celebrates the sonic gems from the past, present, and future, showcasing over 60 artists du moment. It hits newsstands this Thursday.