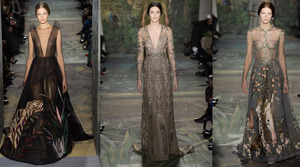 (NEW YORK) Valentino
The setting for Valentino’s Spring Couture show may have been in Paris’ Hôtel de Salomon Rothschild, but the interior transported show-goers into a steamy jungle, via Rome. The set was created by Maurizio Varamo, who details the scenery for the Teatro dell’Opera di Roma, setting the stage for the flurry of opera-inspired looks crafted by Maria Grazia Chiuri and Pierpaolo Piccioli.

Look one spelled out the theme quite clearly: a sheer tulle gown featured a flouncy skirt, embellished with a selection of musical notes from Giuseppe Verdi’s La Traviata. Each following look represented another operatic performance. A grey sheer long-sleeved gown had a floral motif, and a depiction of Adam and Eve in the nude on the getup’s full skirt. A heavy strapless tapestry gown was covered in a digital leopard print and finished off with an abundantly-tasseled hem. Minimalistic dresses with cape-like details in earthen tones were interspersed with meticulously-crafted lace numbers. The latter of which were done with high necklines and caftan-esque shapes. More Couture-ready flourishes of fantasy came via delightful animal motifs: butterflies flittering on a black tulle dress, a lion baring his teeth on a round skirt, a snake winding around one frock’s waist, and a crane taking flight on a loose pantsuit. The bare faces and slicked-back hair offered a blank canvas for the main act: the craftsmanship. While the collection covered a wide swath of topics and silhouettes, the variety was ultimately refreshing and well-executed on every level.

Fendi Unveils Their Restoration of the Trevi...

Rome Couture Week Has Been Canceled For...