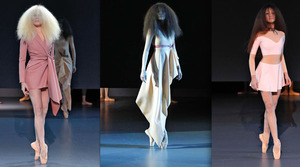 (NEW YORK) Viktor & Rolf
Viktor Horsting and Rolf Snoeren were on point this couture season. The design duo presented their Viktor & Rolf collection on the toned bodies of the ballerinas of the Dutch National Ballet. With frizzy hair that fell over their white painted faces, the girls perched en pointe in their ballet shoes donning mostly nude numbers. The result: mods that looked like spooky dolls not unlike something out of a Japanese horror film…and that’s a good thing.The flesh-toned ensembles looked like pieces that real-life ballerinas might don. In some cases, it was hard to tell where the skin ended and the fabric began. Dresses were printed with faux-tattooed images of birds, bows, and butterflies. Horsting and Snoeren have taken to using their couture show to flex their conceptual arty sides. Their collection last season marked a return to the Couture calendar after a 13-year hiatus, and it was comprised entirely of black garments that fit together like a puzzle so that at the end of the show as the models laid down to transform into one mass object. This season, while visually much lighter, had its own undertones; the message? A giant screen bedecked with Viktor & Rolf’s ad campaign for their new perfume, Bonbon, served as the backdrop, featuring a nude Edita Vilkeviciute covered in painted bows. If the new scent is anywhere near as successful as their first perfume Flower Bomb, the design duo will be dancing their way straight to the bank.

Banana Republic And Marimekko Team Up For A Colorful Collab