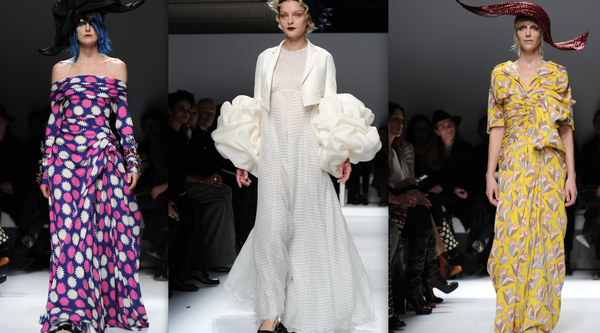 (NEW YORK) Schiaparelli
Marco Zanini debuted his much-anticipated collection for Schiaparelli at the haute couture shows in Paris today. The former Rochas creative director was hired by Schiaparelli owner Diego Della Valle to helm the collection in late September of last year. The debut not only marks the revival of the brand first founded by Elsa Schiaparelli in 1926 after a 60-year hiatus, but it also marks the brand’s first foray on the couture circuit. So who turned out to take in Zanini’s show? Ines de la Fressange, Carla Bruni-Sarkozy, Elle Macpherson, Farida Khelfa, and Jean Paul Gaultier (the latter of whom launched his own couture line, circa 1997).

While not all of the designers that show at couture are required to have a full collection of purely couture clothing, Zanini told The New York Times critic Suzy Menkes that “not one garment has seen a machine.” That’s quite a feat for Zanini and firmly establishes how the brand plans to position itself. Ms. Schiaparelli was known for her eccentric style, which included everything from a dress with a giant lobster on the skirt once worn by Wallis Simpson to a hat crafted from a shoe and gloves with pointy gold metal fingernails. Also of note: Schiaparelli counted surrealist artists Salvador Dalí and Alberto Giacometti as close friends and collaborators. Zanini made sure to stay close to Schiaparelli’s quirky style, while developing his own signature for the brand.

It was a diverse and forward-thinking collection for the modern woman. That requisite couture bridal number was trotted down the runway with a twist: instead of an elaborate frock, the high-end bit of bridal took shape as a white pantsuit with cropped legs and embroidered peplum on the top. The shoes? Thong sandals. Touches of Schiaparelli’s famous “shocking pink” were found in the opening look, which featured Stella Tennant in an off-the-shoulder ruched and draped floral dress, whose hand painted flowers had the effect of polka dots. The look was topped off with milliner Stephen Jones‘ handiwork on a crinkled black chapeau in the vein of an early 19th century cocked hat. Plus, a Grace Coddington meets Sonia Rykiel ginger wig on model Nika Cole was paired with a shiny striped floor-length caftan. Other moments included Jessica Stam parading down the runway in a flowy white chiffon dress, worn with a cropped blazer that had cloud-esque cuffs (and, yes, this evening number was paired with black flats). In short, it was an exciting debut by Zanini, who clearly understands the desires of the modern cosmopolitan woman—and knows how to communicate that in couture-wrought form.